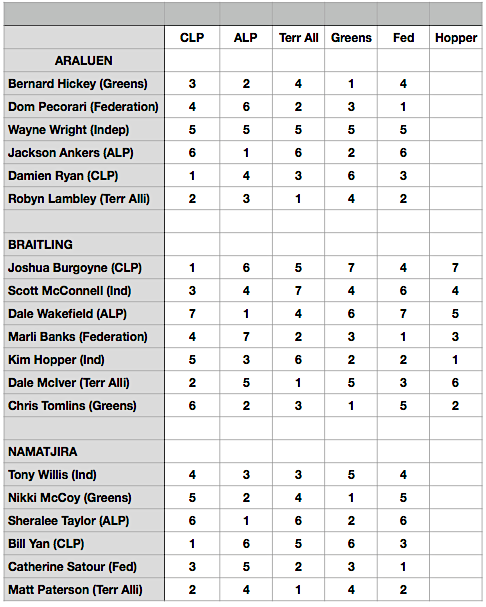 The Greens have elevated the ALP to 2nd position on their how-to-vote card, at the expense of the Federation Party, in Araluen and Namatjira.

The Araluen candidate of the Greens, Bernard Hickey, says: “We have had to change how to vote advice for Araluen and Namatjira electorates unfortunately due to unexpected policy illogicality from Federation Party preferences in these electorates meaning our preferences risked not going in order of descending progressive policies.

“So in Araluen Jackson Ankers (ALP) is now 2 and Dom Pecorari (Federation) is now 3.

“In Namatjira Sheralee Taylor (ALP) is now 2 and Catherine Satour (Federation) is now 3.

“All other Greens preferences remain the same in these electorates.”

Meanwhile the Electoral Commission says more than four per cent of eligible NT electors turned out to cast their vote in the 2020 Territory Election on the first day of voting, yesterday.

The CLP is giving its preferences to Territory Alliance (TA) although that party’s sitting member in Araluen, Robyn Lambley, says no deal has been struck and their “number twos” are going to the Federation Party.

This suggests that the CLP, which is tight-lipped, is seeking to give the impression that there is no real difference between it and the TA, which other contenders have been claiming to detract from the TA. The approach to fracking, for example, is very different.

Or else the CLP takes the view that if it fails to win government, the Territory will be in good hands with Territory Alliance at the helm.

“Giving” someone the second preference means a candidate or a party is asking you to put “2” against a particular name on the ballot paper.

Unless a candidate gets 50% of the votes plus one, a distribution of preferences takes place which then count as votes for the top scorer.

It starts with the preferences of the lowest scoring candidate and follows with those of the second lowest scoring and so on, until a winner can be declared because the 50%+1 quota is reached.

The point is, it’s the second preferences that are allocated, not the third or the fourth etc  – hence the favour works.

This process can result in a switch of leader.

This is a very condensed explanation – the full deal is on Electoral Commission website.

Braitling candidate and sitting Independent for Stuart, Scott McConnell, is leaving the preference choice to the voters and is not issuing a how-to-vote card.

In any case it’s not what the cards are saying but what what the voters put on their ballot paper that counts.

The tables on the right show the the how-to-vote suggestions by the parties and some independents – see headings on top.

The column on the left shows the candidates in the order they will appear on the ballot papers.

The numbers for Araluen under the Territory Alliance heading are from sitting member Robyn Lambley. She says other TA candidates are making their own decisions about whether of not to allocate preferences.

We will update this table as information comes to hand.