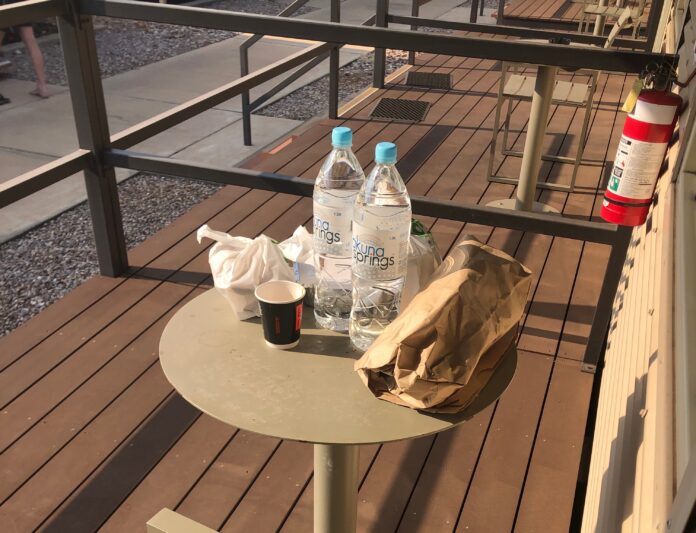 ABOVE: Food which hunger striker Braedon Earley left outside his quarantine room.

“We won’t be commenting on individuals in the quarantine facilities.”

That is the blunt answer to questions from the Alice Springs News put to the Territory’s coronavirus pandemic authorities about Braedon Earley, a Darwin businessman and some-time political figure who is in quarantine, where he is now on a hunger strike, after a flight from Brisbane on Sunday.

Mr Earley has raised major issues about the Howard Springs Quarantine Facility where he is being detained, including what he considers major safety shortcomings.

He says he has observed some repair work today.

However, when he raised issues with two uniformed police officers this afternoon, posted at the facility, they told him: “We don’t take complaints.”

Meanwhile a spokesperson for the facility provided this statement to the News: “The Northern Territory Government is the owner of the Howard Springs Quarantine Facility and has partnered with private contractors to provide soft facilities management including the provision of meals and amenities in the centre.”

“All staff are inducted onto the site and are required to undertake Personal Protective Equipment (PPE) training.”

Mr Earley says: “Some people are wearing PPE, some are not.”

Says the statement: “All persons in quarantine are provided with three meals per day, which are prepared and delivered to Australian standards.

“People undertaking quarantine also have access to click and collect services where they can order products from Coles, Woolworths, Kmart and Big W including non-perishable goods and personal items such as yoga mats, puzzles, books and clothing.

Mr Earley says he has been unable to obtain groceries from Coles because the click and collect at Coles Coolalinga was sold out, and with Woolworth the phone kept cutting in an out with the WiFi.

“Two of the airborne precautions require doors remain to be closed, and cleaning hand between entering and leaving the room,” says Mr Earley.

“There is no sanitiser inside nor outside of the room and the laundry.

“The cabin doors butt up to each-other. People entering or leaving at the same time would not be maintaining social distancing,” says Mr Earley.

“That means the design of the facility is absolutely unsuitable.

“When you are sitting on a balcony, people on adjoining balconies are too close for airborne particles. Even with face masks in use, eyes and skin are exposed.”

BELOW: Signs Mr Earley says he saw being put up today. 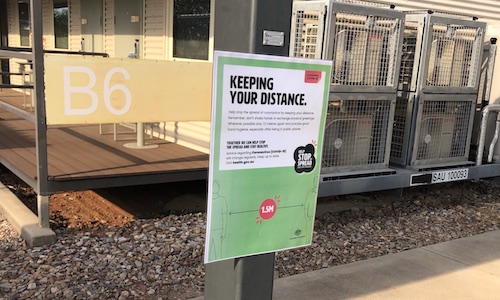