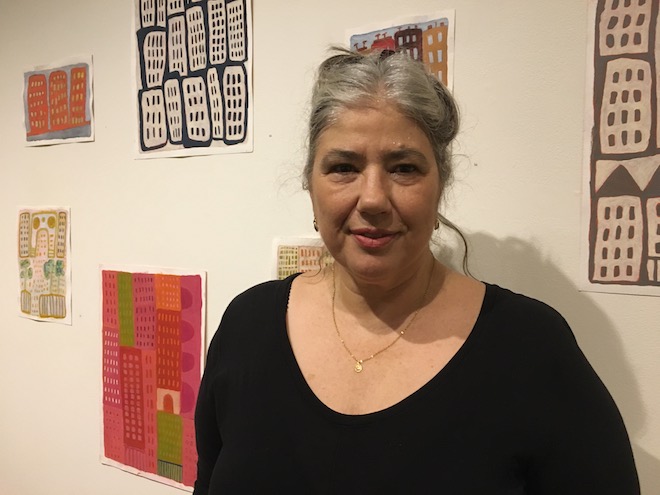 It’s hard to think about New York now without the looming shadow of the pandemic. The city is in the grip of a massive second wave, reporting over the past week an average of more than 15,000 new cases every day – numbers unimaginable for us here in the centre of Australia, blissfully virus-free (though the situation, as we know, remains ever fragile).

One thing Marina Strocchi’s exhibition New York, New Work does is take us back to the pre-Covid era – to the innocence of a time when you could look at New York and think about it in its iconic states. The icon she has chosen is the tall building.

And so many of them proliferate in this exhibition that it is like walking into a miniature high-rise city – though it’s a silent and ghostly one, no people, no traffic, except for the very occasional impossibly long, low-slung sedan. 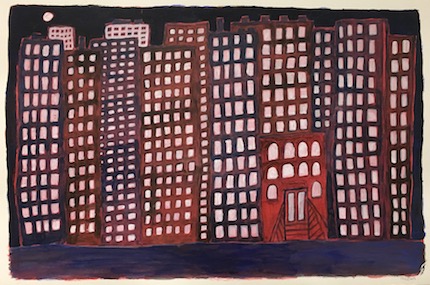 These absences again mesh with our impressions of the deserted post-Covid city, where everyone has retreated behind closed doors, but they have nothing to do with what Strocchi was preoccupied with in this work.

The artist, who has has lived and worked in Central Australia for three decades, had been awarded a fellowship which took her to the city for three months in 2019, just ahead of the pandemic.

Despite the fresh source of inspiration there is strong continuity with her previous work, which has long featured the graphic repetition of recognisable forms, rhythmically organised across the painted surface. This is again what she did in her studio in Brooklyn, but instead of the senna bush, the baobab tree, the railway track, the camel or fish or bird, her gaze had been seized by tall buildings.

A pleasure of the show, if you spend time with it, is to see the clustered buildings in their different lights and quarters, as she did, making her way around the city, before returning to the studio to remember them in paint, mostly on paper, some on linen, all at small scale (she needed to bring them back in a suitcase).

However, it is only minimally that their character in the material city interested Strocchi. In the studio her own process in paint, her interest in line and shape and pattern took over, and she entered “the zone” as she describes it – the deep absorbing calm of repetition.

So although the show looks at a glance to be about the built form of one of the world’s great modern cities, it has quite an intimate feel – this is not concrete canyon territory, there is nothing hard-edged to it, nothing industrial. It feels artisanal. 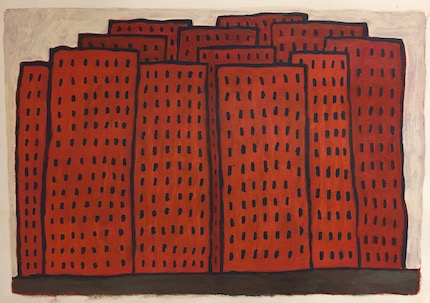 This is the effect of her hand-drawn line. All the buildings have wavery edges, many of them are on a bit of a lean, some have all illusion of solidity stripped away – they look to be no more than a stencil masquerading as a building.

She is not interested in perspective, apart from a hint of it in noting occasional small architectural features. Interestingly though, she can also achieve an impression of hulking mass while working with flattened forms – as in The Projects, 2020 (above left).

Strocchi’s love of the line goes in a different direction in a small group of works, where unusually for her she depicts the human form. Each figure is no more than an amalgam of circles, parts thereof, maybe a line or two, but it is amazing how suggestive and even tender these pared down representations are.

In another outlier group, it is her love of shape that takes precedence – the silhouettes of dogs, birds, an archaic chimney sweep, a church with a steeple.

The show by this prolific artist of The Centre – her 44th solo in 30 years of exhibiting – is at the Araluen Arts Centre until 7 March. While there you can also take a look at the Portrait of a Senior Territorian, reviewed here. 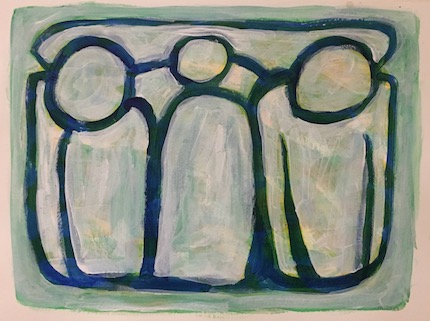 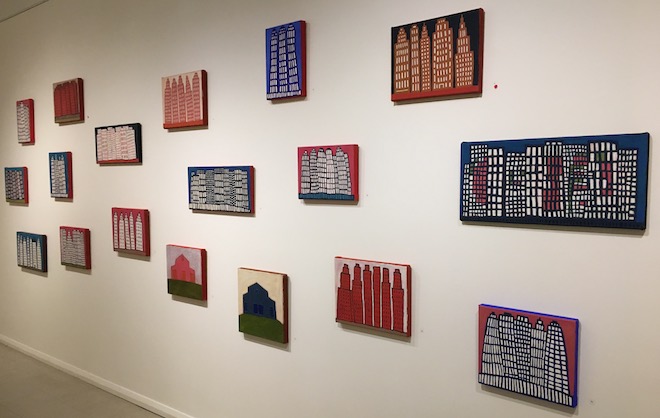