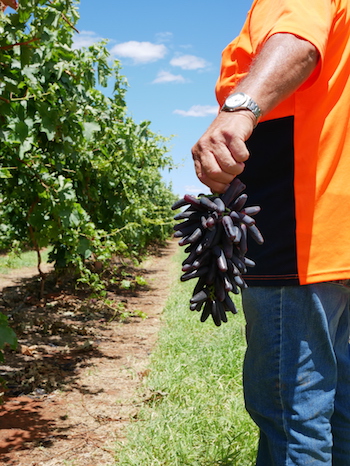 A bunch of seedless red flames.

One farm, owned by a giant of the grape industry, Marciano Table Grapes, has had little trouble with this year’s harvest, which is now coming to an end, despite a difficult start.

But a mango farm nearby has a different story to tell.

“At the start of the year we struggled,” says Marciano Table Grapes general manager Tony Camera, but since many workers have been able to come from Victoria, the farm has had “nearly nil waste”.

Most waste that did occur can be sheeted home to La Niña and the rains that it brought on grapes that were uncovered.

However, the company’s owner, Phillip Marciano, was today quoted in The Australian as having lost 30% of this year’s harvest at Ti Tree, losses he attributes to border closures.

Whatever the case, Mr Camera says that it has been a good year.

While the farm brings jobs to the area, almost none of the positions are filled by local residents.

Almost the entirety of the 480 acre farm is used for vines and usually requires roughly 100 workers per season.

This year, due to border difficulties, the farm could only employ 80, but was still successful in harvesting the produce.

A majority of workers are from the grape capital of Australia, the Sunraysia region of Victoria.

They start their season in The Centre where the nation’s first vintages are picked. 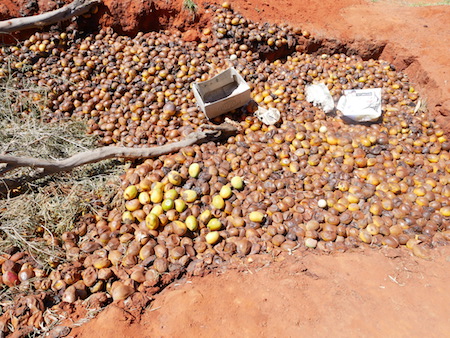 However, Mr Camera is not a fan of the way that the farm and the area have been treated by the Northern Territory Government.

A pit full of rotting mangoes that will never make it to market.

In July 2019 Mr Marciano threatened to pull up recently planted vines in retaliation to changed water allocations in the region. Mr Camera is simply after a few more amenities.

“There should at least be a little Woolies or Coles here,” he says.

Currently, workers on the farm must either pay the high price of shopping at Outback Stores with small stock lists, or travel to Alice Springs to do bulk shopping. Most opt for the latter.

“It’s all good for Alice, but they make it hard,” he says.

“I couldn’t name one thing good that’s happened for Ti Tree in the past four years. Not a swimming pool for the kids, nothing.”

Still, the farmers are upbeat about the latest harvest.

Vines planted in 2019 are already producing, and vines planted only this year look set to produce for next year’s harvest.

There are plans to cull a series of plots of older vines to make way for new growth in the coming year.

Table grape vines can produce for upwards of 30 years if looked after correctly, but generally peak in the third and fourth years of production.

The success of the season is not replicated next door at the locally owned Red Centre Farms, which despite producing mangoes of the highest quality, has failed to find pickers and packers for production in the current season.

Similar to the positions at the Marciano farm, the mango farm usually brings in workers from interstate, most often travellers looking for work in rural areas who respond to Facebook advertising for farm work.

Throughout the orchard, it is hard to walk without stepping on huge mangos rotting in the sun.

The fresher fruits are fleshy and golden, the older are boiled by the sun, brown and deflated.

Rows and rows of grape vines planted in 2019 are already prospering at the Marciano farm.

Towards the front of the field are two pits, one full of rotting fruit, the other prepared to be filled with more. The smell is hot and sickly sweet, the sight is depressing.

John Crayford, who owns the farm along with his wife Shelley, says that like grapes, mangoes are ready when they’re ready and only give you a short window to harvest.

“Mangos don’t give you any time — you’ve only got a few weeks.”

Mr Crayford says that in a usual year the farm would employ 15 or 16 workers, five or six packing and the rest picking. This year, none of that has occurred.

This year they have relied solely on the sales at their small shop on the farm, where they sell a range of mango products and general store supplies, and travellers who stop to pick their own mangos and pay per kilo.

Mr Crayford says that usually the shop is far busier during the tourist season of May to October, but due to the border closures around the nation caused by COVID-19, the shop’s traffic was slow.

So despite the discouraging nature of the mango season, Mr Crayford says that it has not been a completely catastrophic year.

The Crayfords have owned the farm for 32 years, but Mr Crayford, who has a bad knee and can no longer move around the farm, says that after all these years, 2020 signified it was time to give it up.

The Crayfords have actually been trying to sell the farm for some years now.

A few years ago they were offered $1.1m for the venture, but turned it down as they were after a slightly higher figure due to recently updating a lot of the machinery.

“I wish I had taken that offer now,” says Mr Crayford, “I’ll never get that offer again.

“This is my superannuation. Every bit of profit I’ve made is on this farm.”

MAIN PHOTO: The pit of fruit will soon be joined by another equally sized fruit grave. Behind the rotting fruit, the farm is overgrown and unkept, another result of the lack of workers at the farm this season.
Facebook
Twitter
Pinterest
WhatsApp

By ERWIN CHLANDA There have been further increases in crimes against the person, Commander Craig Laidler told media this morning, but the rise is less...
Read more
Issue 8

By JULIUS DENNIS A survey filled out by 110 hospitality businesses, 25% of the Hospitality NT membership, has found there are over 7000 workers needed...
Read more
Issue 8

By STEVE MENZIES Individual battles within the overall contest of the contest will highlight the game between Federal Club Eastside and Rovers Complete Construction this...
Read more