The queen of desert fruit 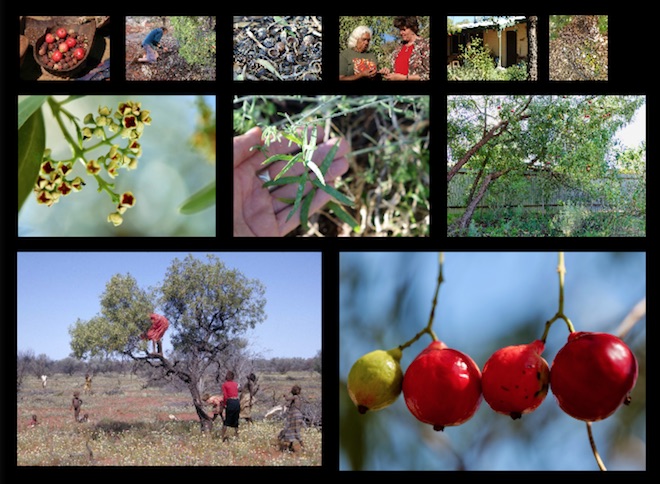 Quandongs are one of the first bush foods my Mum gave me. When a skinny kid I met the skinny trees.

My mum grew up eating Quandongs on ‘Murrum’, a sheep station in the Murchison, Western Australia. We were on Badimaya country but my family rarely spoke about Aboriginal people and the dark past.

Instead, we’d park the ute under laden trees, pick the bush foods and take them back to the homestead.

Mum, my aunt and others would make pies, jams and more. “Yum, more please Mum!”

Twenty or so years later, I met the trees, Jawirli, on Martu country. Sadly, camels have since ravaged those trees. But artists like Martu woman Noreena Kadibil keep them alive in memories embedded in their paintings.

On Arrernte country, the fruit are called Pmerlpe. In 2010 when my family bought a house in Alice Springs, the mature Quandong trees were one asset in the purchase. They were also one of the few things growing in a barren garden. They’re fickle plants but overall, they continue to thrive.

Quandongs are the queen of desert fruit. Their red skins can be eaten fresh, cooked and/or soaked to reconstitute if dry. The fruit is tart and delicious simmered with sugar or local dates. Each August – September they ripen so as their baubles glow.

Elsewhere, the nuts are used for necklaces and the kernel as a hair conditioner and/or rubbing medicine. The soft malleable timber was prized by desert woodcarvers. But, due to compound threats on plant populations, Maruku Arts have banned buying the timber.

I used to give the nuts away. But now it seems the seeds are too precious to destroy the chance for seedlings. 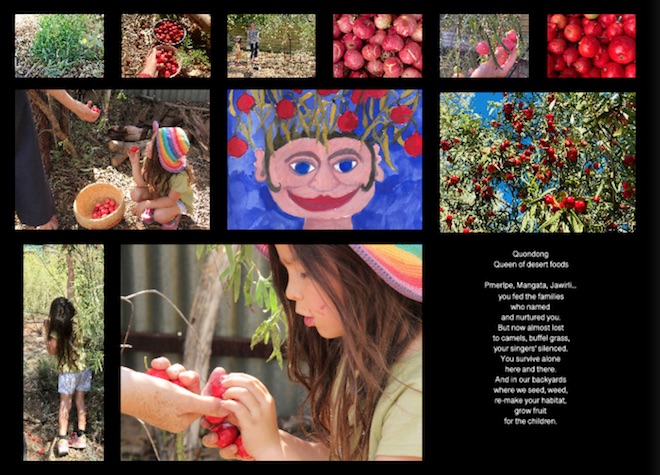 Camels eat Quandongs as if they were ice-cream. In the NT, Santalum acuminatum is listed as a vulnerable species. This classification should extend to WA and SA desert regions where the impacts of camels, wildfires, rabbits and other factors mean the trees are rarely seen.

Quandongs were traded huge distances by Aboriginal people (and still are). They’re another of the desert species that have been selected, transported, protected and nurtured by desert people, probably for generations. Thus, they are partly domesticated by the ancestors. The fruit would have had major Jukurrpa sites and storylines. Who has recorded these treasure troves of fact and wonder?

Pitjantjatjara people call Quandongs Mangata or Wayanu. The late Ushma Scales had the foresight to see the values and threats to Wayanu. Ushma and his family collected seeds from a variety of plants on the Pitjantjara lands. They then established an orchard at Ilparpa and distributed seedlings. Ushma shared his growing methods with many people. Today, we continue to adapt them.

Please respect the care, knowledge and management of Quandongs by those people who have gone before us. I share these ideas to learn and grow plants so that future generations can have the food, pleasure and health of Quandongs in their gardens or on their country.

I don’t think it is fair or equitable for others to commercially develop the species to the exclusion of custodians and the general public.

The methods we’ve used grown Quandongs in Alice differ from others in several ways. Most importantly the seed-plant grows in situ – where you want it – so a vulnerable seedling and host do NOT need to be transplanted.

Be curious, confident and willing to invest effort now for a few years to come to bear fruit.

Quandongs take six to seven years to mature and bear fruit (but most plants in the desert are more rainfall dependant than time dependant). 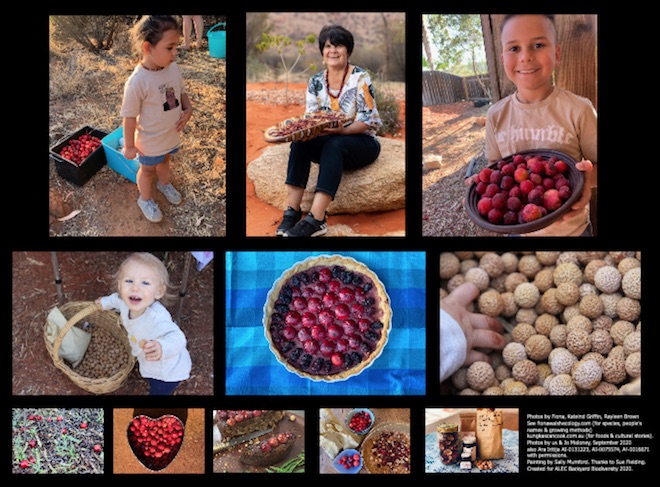 The photo montage reproduced in sections here is by Rayleen Brown (of Kungkas Can Cook), Katelnd Griffin and Fiona Walsh. It has full captions and credits for each of the photos. The montage received a Special Mention in the 2020 ALEC biodiversity photo competition. We plan to print a limited edition set of posters.

Author notes: This article is adapted from notes compiled for a Quandong growing workshop. Thanks to the editors for their invitation to publish it here.

Text of the poem in the middle section of the poster above:

Pmerlpe, Mangata, Jawirli… / you fed the families / who named / and nurtured you. / But now almost lost / to camels, buffel grass, / your singers silenced. / You survive alone / here and there. / And in our backyards / where we seed, weed, / re-make your habitat, / grow fruit / for the children.