Dust storms no obstacle to the Sport of the Outback 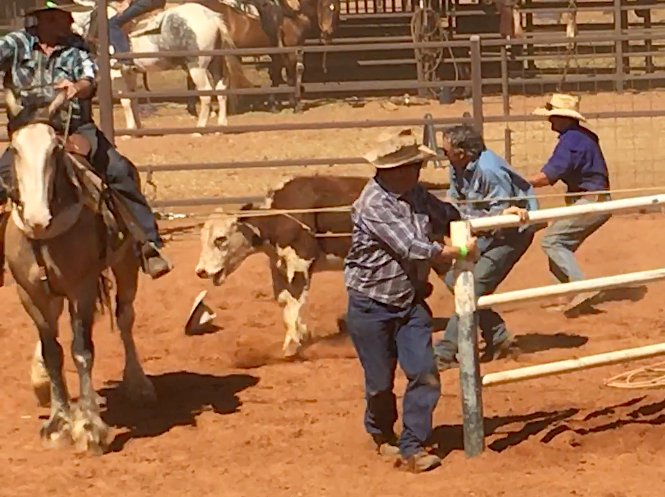 Melbourne people do pushups in their living room to remain fit and sane during the pandemic, while in Alice Springs some people, well, they wrestle cows.

The gale force dust storms that at one point completely obscured what was happening in the arena, a few metres from the spectators, for him clearly were a minor diversion from what’s regarded here as the Sport of the Outback.

Or as commentator Daniel Williams explained, quoting Mr Schmidt, it’s the best thing you can do with your pants on.

Competitors came from as far as Strathalbyn in South Australia, as well as our southern neighbour’s Top End: Anna Creek, Oodnadatta, Quorn and William Creek.

They came to this annual event, the fifth in Alice Springs.

But the winner in the yards specially adapted for the competition on Undoolya yesterday was Sean Leigh, from Old Ambalindum. Both are cattle stations east of Alice Springs.

Bronco Branding allows this part of cattle management to be performed pretty well anywhere a temporary yard can be erected, avoiding expensive cattle crushes and transportation of stock.

A beast is lassooed by a rider on a horse wearing a collar to which the rope is attached. He drags the beast to a panel that has two parts, one with a 45 degree angle bar up which the rope slides, before dropping into the gap in the middle.

That allows the rider to hold the “catch” in place for the handlers to attach one rope each on a front and a hind leg, immobilising the animal so the branding can happen.

In this competition that is not done with a red-hot iron but a paint roller and a brush, after which the animal is let go.

The winner is the team that can do that tree times in the shortest time.

It sounds easy – but watch the video!

The Bureau of Metereology says while early build-up rains have dropped 77mm over Darwin since Saturday (including 17.6mm this morning), bringing their daily and monthly total rainfalls to the highest since 1981, in The Centre the fast-moving severe thunderstorms packed a punch wind-wise, but left little rain behind.