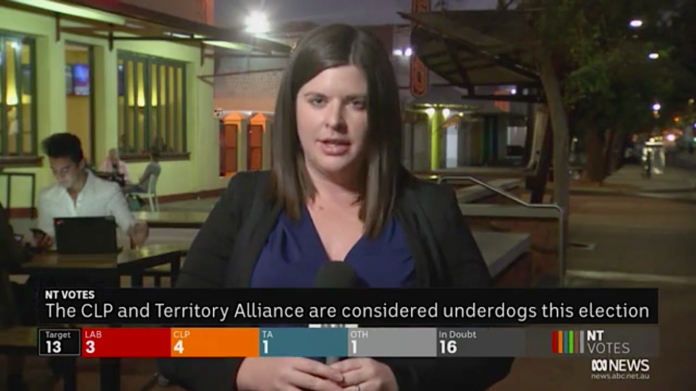 That was the impertinent instruction from Dale Wakefield’s minder when I arrived at Labor’s “after party” in the Todd Tavern soon after polling booths closed in the 2020 election.

We local journalists, including the ABC’s Katrina Bevan and News Corporation’s Jamal Ben Haddou (both pictured above in a piece-to-camera by Ms Bevan) had to practice our craft in the street.

I was told by the first Member of Gwoja, Chansey Paech, that the Aboriginal people inside did not wish to be photographed.

And so a minority considered itself entitled to interfere with a time-honoured democratic tradition, allowing media to paint a lively picture of the immediate aftermath of an election – the laughs and the tears.

The local Labor apparatchiks later in the evening changed their minds but it was too late for the ABC to send footage from inside to its admirably comprehensive coverage of the poll. 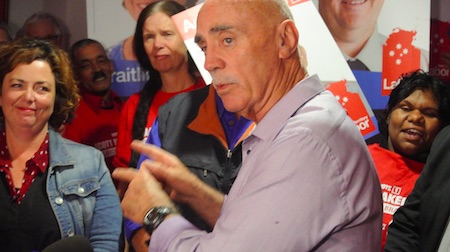 The rude minder’s boss is unlikely to do any more damage to freedom of speech because she’s unlikely to survive – as a Member and a minister – the 2020 election.

The News was at the after party in 2016 (I took this photo) when Federal Member Warren Snowdon predicted, accurately, that Dale Wakefield would be elected, by 27 votes, as it turned out.

Is the attitude to professional media doing their job going to get any better? Doesn’t look like it.

Ms Wakefield is likely to be replaced by Joshua Burgoyne who did not agree to be interviewed by the Alice Springs News about his party’s election platforms, despite repeated requests from us, starting in May. 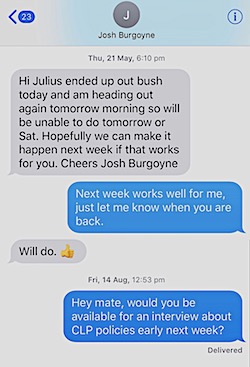 ABOVE: There was no answer from Burgoyne to the text from the News on August 14. In between those texts reporter JULIUS DENNIS made several phone calls to CLP candidates and staff which similarly did not result in an interview.

Mr Burgoyne has previously stood, unsuccessfully, for the Town Council in 2016, for the Senate last year, and is the son-in-law of former Mayor Damien Ryan who contested the adjoining seat of Araluen.

The ALP candidates also refused to be interviewed. As with the CLP. we have told them we don’t do journalism by handouts from minders.

Bravo to the Independents, Territory Alliance, the Greens and the Federation Party who acknowledge the function of media in a free country.

Mr Burgoyne’s father-in-law must be asking himself why he isn’t doing any better after a decade as Mayor during which he was paid $1m by the Town Council for the role.

The answer probably is that his accomplishments in that job, to which he may well return, are hardly breathtaking: The town still doesn’t have flood protection, the dump is overflowing, street crime remains rampant, tourism was at a low ebb well before COVID, the national Aboriginal art gallery project is a dog’s breakfast, the sewerage plant is still wasting prime space and billions of litres of water and much of the council’s business is conducted in secrecy. And so on. All these are issues in which Mr Ryan, as the leader of the town’s elected government, had every opportunity of making a difference.

This is how things are shaping up in the wake of Election 2020: The town will not have a front-bencher; Ms Lambley will not represent a burgeoning third party but be its sole survivor; an inexperienced CLP Member in Braitling hiding from questions will become the incarnation of political irrelevance, 1500 km from Darwin; and of the two newcomers to politics seeking to represent Namatjira., take your pick – both were silenced by their respective parties during the campaign.

The town voted for faces, all around us, often doubled, trebled, quadrupled and the fences and planted alongside main streets.

Where were the issues, the ideas, the policies, the political philosophies, defined, costed and sourced to committed supporters? 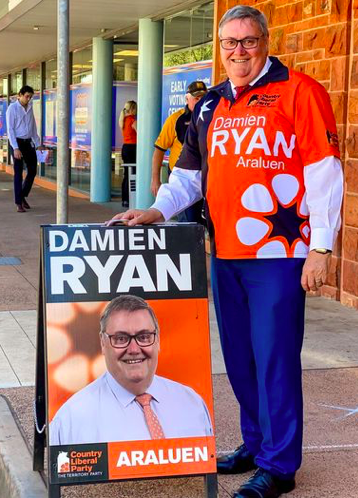 Although Gunner had done no more about COVID-19 than follow instructions from health experts and the national cabinet, he perpetuated the fantasy that he was saving the NT. Enough people swallowed that to get him over the line – just – with clearly the loss of several seats.

Damien Ryan on Facebook with a corflute of Damien Ryan.

For how many more elections will The Centre be the patsy to the northern suburbs, domicile to the members of our bloated bureaucracy, and the safe seats for ministers whose minders cushion them from probing media, churning out handouts complete with “comments” from the ministers so we don’t have to bother them: Wanguri Nicole Manison, Casuarina Lauren Moss, Nightcliff Natasha Fyles, Fannie Bay Michael Gunner.

They are feeding the public spin. Example: As the world is learning to do business by Zoom and the like, the Alice Springs News asked to participate in the daily press COVID conferences, mostly monologues by Gunner and Fyles.

Gunner’s management of COVID has created two classes: On one side the massive number of public servants, suffering not an iota of financial disadvantage, their jobs secure, their full pay guaranteed.

On the other, the rest of us – businesses closing, people losing their jobs, their life’s work crashing down.

Whose votes does Gunner rely on? To a great extent those of the public servants in the northern suburbs of Darwin.

How will the rest of the people fare as Gunner’s crushing debt approaches or exceeds eight billion dollars – well in excess of the NT’s Budget?