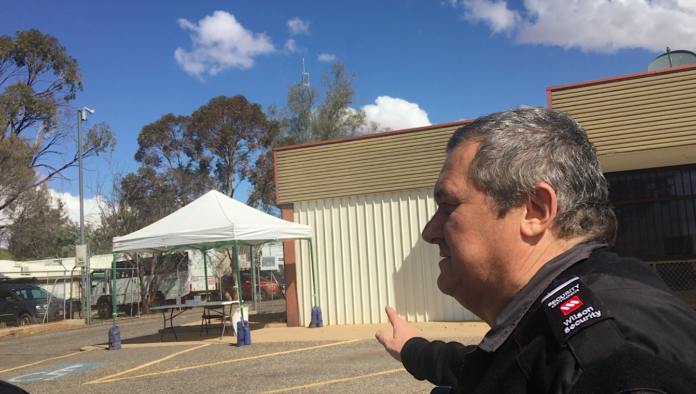 By ERWIN CHLANDA with KIERAN FINNANE

Ahead of the NT borders reopening the Central Australian Health Service announced the opening of a drive-through Covid-19 testing clinic, located at 17 Wilkinson Street, in the Alice Springs “industrial area”.

Yesterday, when the Alice Springs News stood in Wilkinson Street to take a photograph of the facility – as a useful stock shot for our ongoing pandemic-related coverage – we were told by security guards not to take photos.

When we challenged them to disclose what authority they had to make that demand they walked away.

We went looking for the Department of Health media release (dated 16 July)  announcing the service and found this:-

“CAHS will have security guards monitoring the access to the drive-through testing clinic to ensure vehicle traffic flows efficiently through the driveway.

“If you are unwell and turn up to be tested you will be transferred to Alice Springs Hospital for assessment,” Dr Belinda Greenwood Smith is quoted in the release.

“It is important that we protect the wellbeing of staff members and other people who are being tested at the Wilkinson Street clinic.”

The News asked the department why it is deemed necessary to employ security guards at the site and what kind of facility, besides the driveway, is at 17 Wilkinson Street?

Meanwhile we did a quick google. Fourth listing: Joint Defence Facility Pine Gap. Not much information in that listing but there is a phone number. When we called it we got a recorded message, strong American accent, announcing that it is the Pine Gap Medical Clinic, with information about opening hours and so on.

So it all makes sense. Or does it?

Does JDFPG’s power reach into the public streets of Alice Springs? Does it have the ability to interfere with ordinary news gathering practices – not that we had a chance to say to the guards that that was what we were doing (see video) – in relation to a public health facility?

The Department has since provided the following answers to our questions:

“The property at 17 Wilkinson Street was deemed the most appropriate because of the length and structure of the driveway.

“The Central Australia Health Service only has access to the driveway and a service room.

“This is a commercial in confidence agreement.

“Security guards are employed by the owner of the site to ensure cars proceed through the facility as directed.”

Meanwhile the COVID operations in the NT continue to lack transparency in other respects as well, while the wisdom around much of the globe is that only a well informed public can be relied upon to combat the virus.

Two emails we sent to Covid Media yesterday, with a reminder today – no response.

Email one: “You have a person, Braedon Earley, in your custody at the Howard Springs quarantine facility who says he has not taken any food for 66 hours.

“I refer to our news coverage and previous correspondence with you. Do you have responsibility for that person? Have you done anything to deal with that situation? If so, what is it? If not, why not? Will you be doing anything? If so, what?

Please comment on the alleged failure to appropriately deal with waste at the facility.”

Email two: “Did Supercars crews and other participants get a reduction of mandatory quarantine from 14 days to 10 days? If so, why?”

Evasive reply: “None of the Supercars team members were in a hotspot when they were declared at midnight on 31 July and none have been in a hotspot since.

“All team members have been undergoing regular testing, with no positive results returned to date. They will continue to undergo regular testing while in the Territory.

“Some crew members had been in an area that was later declared a hotspot in the 14 days prior to it becoming so. The Chief Health Officer has been working with NTMEC and Supercars over the last few weeks providing continual detailed advice around managing the risk.

“Since the announcement of the hotspots, Supercars teams have been following strict Supercars COVID guidelines to manage those crew members. They are now undergoing supervised quarantine in a government-approved facility, away from other team members. This is at the expense of Supercars.”

The News seek to clarify this: “Thank you for your email. So, as recently as seven days ago some people were in places which currently are hotspots. Would that mean anyone else would be required to enter 14 days’ quarantine upon entering the NT?

“How many days are the people mentioned above required to quarantine? In the supervised quarantine you mention, are they in contact with each-other and other people?”

We asked Bill Whitington, Senior Communications Consultant, Strategic Communication and Engagement, Department of the Chief Minister, in a text yesterday, when could we expect a reply to our questions. When he called back he complained that we were disturbing him on his holiday (of which we had no opportunity of being aware; Mr Whitington had not bothered to divert his phone) and then told us the NT Government has 24,000 public servants. We should find one who will answer our questions.