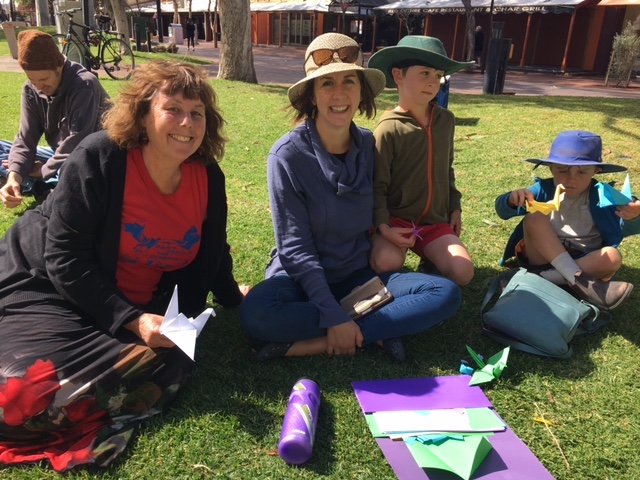 “The 75th anniversary of the bombings of Hiroshima and Nagasaki comes even as the risk of use of nuclear weapons has risen to levels not seen since the end of the Cold War. Military incidents involving nuclear states and their allies have increased in frequency, and nuclear-armed states have made explicit threats to use nuclear weapons.”

This warning comes not from the peace movement – inexplicably small in Australia given the size of threat – but from the International Red Cross Red Crescent Movement.

“There are over 14,000 nuclear bombs in the world, thousands of which are ready to be launched in an instant,” their statement of 31 July reminds us. “The power of many of those warheads is tens of times greater than the weapons dropped on Nagasaki and Hiroshima.”

Yesterday, 6 August, many around the world remembered the terrible loss of life and suffering in Hiroshima 75 years ago when the United States dropped a nuclear bomb on the Japanese city. It killed an estimated 70,000 on that day and injured, often horrifically,  tens of thousands.

Three days later, on 9 August, the Americans devastated the city of Nagasaki with a second nuclear bomb, immediately killing 39,000 people.

By 1950 an estimated 340,000 had died because of the bombs’ effects, including from illnesses caused by exposure to ionizing radiation.

The commemoration of Hiroshima Day is not just about remembering this tragedy. It is a reminder of what needs to be done to avert such horror ever occurring again.

“Treaties to reduce nuclear arsenals and risks of proliferation are being abandoned,” says International Committee of the Red Cross (ICRC) president Peter Maurer, “new types of nuclear weapons are being produced, and serious threats are being made. That’s an arms race, and it’s frightening. We must push all states to ban nuclear weapons and push nuclear weapons states to negotiate, in good faith, steps towards their elimination.”

These steps include the Treaty on the Prohibition of Nuclear Weapons adopted by 122 states at the United Nations in July 2017. The treaty will become legally binding for countries that ratify it after 50 do so; to date 40 have.

Jonathan Pilbrow, one of the organisers of the local Hiroshima Day gathering and of the group known as Alice Springs Peace Action Think Tank, says the treaty is “the key to our future: a world without nuclear weapons.”

“This treaty greatly strengthens the global consensus against these weapons and increases pressure on the nuclear armed countries to disarm. It is in the hands of everyday people to ensure our leaders are on the right side of history”, says Mr Pilbrow.

The ratifying nations include our close neighbour New Zealand, one of our Five Eyes partners, but not Australia. 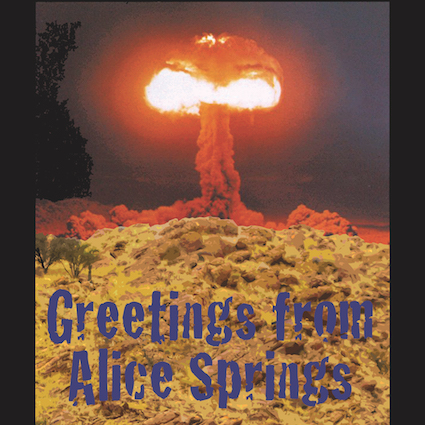 At present, our government not only declines to sign on to the treaty but actively supports a policy of nuclear deterrence and does so in a way that brings it close to home for residents of Alice Springs.

“Australia is not only a beneficiary of the US policy of extended nuclear deterrence, it is an active supporter of it, through our joint efforts with the US at Pine Gap and at other facilities, such as the Naval Communications Station Harold E. Holt, and the Joint Geological and Geophysical Research Station [in Alice Springs],” former defence Minister Christopher Pyne told the Australian Parliament in February las year.

“As the then-Prime Minister, Bob Hawke, noted in his public statement on Pine Gap in 1984, Australia should not claim the protection of nuclear deterrence without being willing to make a contribution to its effectiveness. Hosting these joint facilities and US strategic capabilities on our soil is Australia’s important contribution to the Alliance.”

It is not hard to see how an existential threat to Alice Springs arises from this position, given the town’s proximity to Pine Gap and the potential of that facility to become a military target.

This though was not the focus of the small gathering in Alice yesterday, but rather the catastrophe for humanity of ever using such a weapon again.

Among them Anneke Marks and her little boys were making paper cranes, as they and other family members have done in previous years. The cranes have come to be the symbol of Hiroshima Day and all that it stands for, a legacy of a young Japanese girl, Sadako, who died aged 12 in 1955 of radiation sickness caused by the bomb.

In this year, dominated by the pandemic, Ms Marks feels that peace is more important than it ever has been:

“While we do that with the people that are immediately close, Hiroshima and the story of our history shows us what goes drastically wrong every time we get too focussed on our immediate needs and not considering the other people and the generations who follow.

“That’s why I’m here. Politically we forget and it’s really not ok. That us and them, we just do it all the time.”

But a nuclear conflagration would impact all of us, wouldn’t it? It would be a global catastrophe.

“But it’s also dangerous. If we’re not careful that will flick. With all the talk about China at the moment, i just feel like, don’t draw a boundary, don’t put us against them because that has never ever worked out well for our world.

“We do need to keep each other safe but we need to do it in a way that thinks bigger than just the people who are immediately around us. I want my boys to grow up knowing that. We pull them out of school and come and sit here and think about peace.

“Eli, my seven year old, wrote this little song at Easter just sitting around the campfire: ‘May the poor become rich / may the rich become poor/ may we all share together / to have hope forevermore.’

“I think it’s there in kids, we lose it as we grow older, the ability to hold life to more simple principle, which is sow what you want to reap, don’t make boundaries to keep other people out.”

Below: On the Flynn Church lawns in Alice, people observe a minute’s silence, remembering the victims of the bombs at Hiroshima and Nagasaki 75 years ago.