Home Issue 31 Pine Gap: A tiny crack, but enough to let some light in
Issue 31Volume 25 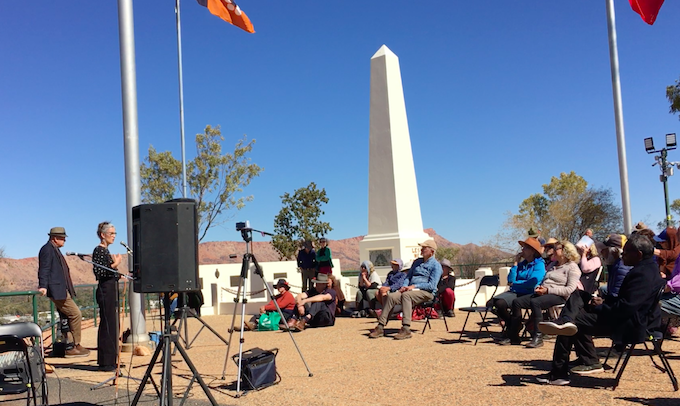 The bright sunshine on Saturday morning delighted the 88 people on top of Anzac Hill, including Arrernte law men Benedict Kngwarraye Stevens and Peter Coco Wallace Peltharre who were there to speak to the place on which the crowd had gathered – an Arrernte place increasingly overlaid with war commemoration (no longer simply honouring the fallen).

The mind of the 89th person, lawyer Russell Goldflam, was far from sunshine when he addressed the crowd about the “darkness, the dark business” of the book’s subject, Pine Gap, a manifestation of formidable power against which a handful of “Peace Pilgrims” pitted themselves, stepping over the cattle fence around the “The Base,” playing a lament for the dead of war and risking seven years in jail. 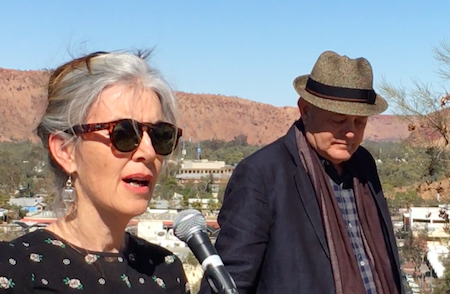 Their lack of power yet abundance of conviction, taking on an institution of international brutality, is what make this book powerful in itself.

Their courage was praised by another speaker at the launch, artist Jennifer Taylor.

The Peace Pilgrims were breaching the “spooky silence that often prevails around Pine Gap,” whose purpose the author advocates “should be out in the open,” offering for public discussion the role it “plays in lethal, illegal drone strikes against citizens of countries with whom Australia is not at war, and the human consequences of this lawlessness.”

When it comes to the Pilgrims “we see how the law is applied in this instance of what the author wryly calls a ‘reckless act of prayer’.”

Said Mr Goldflam: “Finnane could have written a whole book just about … what Pine Gap does and how it does it: about shadowy networks of hovering geostationary satellites; about covert committees meeting in closed rooms to decide where to focus antennae so as to suck up all manner of electronic data and eavesdrop on whoever, wherever they choose; about Pine Gap’s key role in carrying out extrajudicial terminations – or to use plainer language, murders – by targeting drone strikes in places we’ve never heard of, assassinating people whose names we’ll never hear.

“About how thanks to the embarrassingly supine compliance and complicity of successive Australian governments with the United States military apparatus, Pine Gap has entangled us all in a radically dangerous geopolitical game, dicing with arbitrary death and mass destruction.”

The book, published by UQP (University of Queensland Press), has already attracted national attention at a time when the unpredictable Donald Trump – the commander of The Base – wants to win another election and Australia is grappling with the question of how to deal with him while China is looking over our shoulder.

Mr Goldflam, a long-time opponent of Pine Gap’s presence and familiar with the activist group as the “intermittent solicitor” for them and the earlier Pine Gap Four, said most people regarded the Pilgrims as “fruitcakes and even nutjobs, casually dismissing them as weirdos”.

He says: “Finnane conscientiously and compellingly dismantles that caricature, and draws us in to the quiet, committed, rigorous, loving world of Margaret, Jim, Franz, Andy, Tim and Paul.

“There’s nothing at all uncanny about them. Indeed, as courtroom tacticians, they were very canny indeed. Finnane deftly describes, with thinly disguised delight, how they made the QCs, who’d been flown in from interstate at taxpayer expense to prosecute them, flounder and squirm.

“The Pine Gap Four eventually had their convictions overturned thanks to some even cleverer QCs who flew in from interstate (at their own expense) to help out.”

A change to the law blocked such a possibility for the more recent offenders.

The book highlights the absurdity of bringing to trial under the Defence (Special Undertakings) Act 1952 – only the second trial in the Act’s history  – people variously armed with a violin, a rattle and a poster – alleging that activists, their lives otherwise committed to helping those in need, were a danger to the nation’s security. 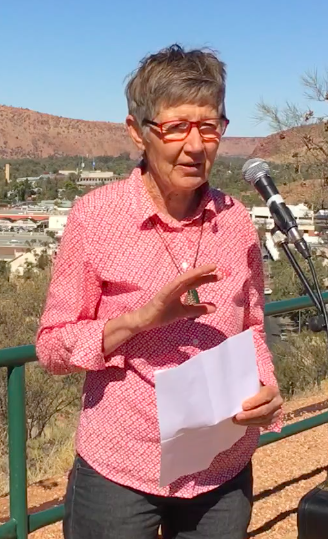 Ms Taylor quotes Peace Pilgrim Margaret Pestorious from the book as she insists she does “all those ordinary things that ordinary people do – putting my ordinary little body on the line. Being a non-violent activist is about disruption, stopping harms, facing up, witnessing, speaking truth to power”.

Said Mr Goldflam: “The Peace Pilgrims, without a lawyer to represent them in their trial, did something that had never been done before, not even by the Pine Gap Four: They opened Pine Gap, by persuading the trial judge to allow the jury to hear evidence from experts about what Pine Gap actually does, including an extraordinary interview with the late Prime Minister Malcolm Fraser in which he explained why the base needs to be shut down.

“Finnane documents, day by day, how the Peace Pilgrims found a crack, and, millimetre by millimetre, prised it open, just enough to allow the light to trickle in.”