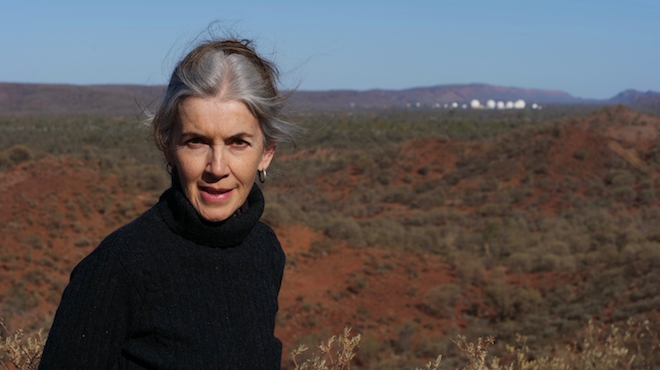 Writing Peace Crimes, my new book which is launching this Saturday, started in these pages – with a 2016 review of a photographic work that jolted me out of my complacency about the Pine Gap military base and its activities.

Thinking about the photograph primed me for interest in covering a conference that year, marking the 50th anniversary of the agreement between Australia and the US to have the base on our soil. Held in Alice Springs by the Independent and Peaceful Australia Network, it drew people from around Australia to hear expert presenters and international guests. I realised how much I had to learn about this ultra-secret so-called defence facility in our neighbourhood.

I went on to provide detailed reportage of two 2017 trials in the Supreme Court of non-violent activists who had staged actions inside the boundaries of Pine Gap. They were charged for what really was a simple trespass under the draconian Defence (Special Undertakings) Act 1952. Maximum penalty, seven years in gaol.

The oppressive state, intolerant of dissent, came into full view when real time in gaol was called for, for people who had harmed no-one, damaged nothing. They were supposedly a threat to national security.

The activists, who call themselves Peace Pilgrims, knew what they were getting into. I was interested to find out what prompted them to risk so much.

Peace is one of those things – like a stable climate and a pristine planet – that we may all want but most of us are not willing to pay the price. I came to see the large view the Pilgrims take of their social responsibilities, how their field of action is the whole of life, as far as their capacities and nonviolence can take them.

They are connected to campaigns and movements, and even specific groups within them, but within the bounds of their strong spiritual and moral frameworks, they seem remarkably free – unconstrained by waiting for consensus, or theoretical coherence, or numeric strength, or likely success. In this way what they do is very open, an offering, for others to make of what they will. I made my book.

More challenging was the research into Pine Gap itself, getting a handle on what it does and the evidence for its role in covert military operations. I needed to know enough myself – and to convey enough to the reader – to establish that the Peace Pilgrims’ actions weren’t based on fanciful concerns, rather they should be the concerns of us all.

In this video film-maker John Hughes interviews me about why I wrote the book as part of a film he is making about the life and work of the late Desmond Ball, the foremost civilian expert on matters Pine Gap until his death in 2016.

The film is called Twilight Time: Desmond Ball: the man who saved the world. The interview takes place at one of the locations on the edge of our town from where you can see the base.

The video was compiled and edited by Fiona Walsh.