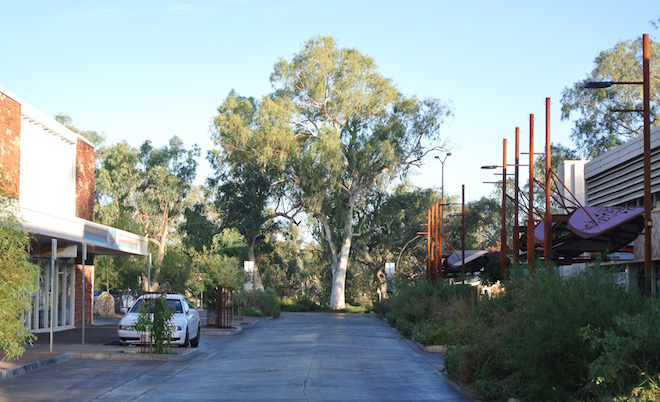 Above: Parsons Street looking towards the river, a previous generation of revitalisation works in the foreground. The river bank in this area will  become an “activation zone” in plans to be released tomorrow. Photo from our archive.

At the eleventh hour, the public will finally see the designs for work intended to “revitalise” the CBD.

Money for the project has been on the table since the Gunner Government was elected. So-called public consultation was conducted in 2017.

I say so-called, because without the ability to influence the final outcome – which meaningfully would involve some feedback on the actual designs – the process undertaken needs another name.

I examined it in detail at the time: a “vision” video, showing an unrecognisable town, a survey, pop-up information stalls.

As I noted back then, this was a far cry from the detailed consultations, in forums, small groups and public meetings that went into the process behind the redevelopment of Todd Street North.

“Disappointment,” I wrote at the time, “in the impact of that redevelopment should not obscure the detailed information and ideas that emerged from the process, and the defined projects, of which Todd Street North and the related work on Parsons Street was but one.”

Sadly, despite a lot of process, the end result has not been transformative and is not much loved, if you can judge by the sparse use of the area.

Perhaps those earlier processes have been made use of to inform present plans, but who knows?

“Two local subcommittees with key local stakeholders” have informed the plans, according to Member for Braitling Dale Wakefield who will release the designs tomorrow.

The Town Council has been part of that process. There have been allusions to it during council meetings, some evidence of frustration around process and money matters, but never any detail.

Given its responsibilities in our public spaces and the fact that it is stumping up $2m+ for the works, I asked Town Council CEO Robert Jennings – a late arrival in the project’s evolution, taking up his post only nine months ago – what council’s stance has been on public involvement.

After all, we have just seen in the case of the solar-powered street lights in Hartley Street, how upset the community can get over the degrading of the public space.

Mr Jennings said council has no “resolved stance” on that issue – meaning, no doubt, that the matter has not been the subject of a formal council resolution.

As a general rule he said council is “always keen on community input”. On this project, however,  my question should be put to the NT Government as it’s their project.

Shouldn’t council be defending the interests of the community in this, and the interest of its public spaces? (I could equally and perhaps more fairly have put this question to the Elected Members of council.)

“Council does do that regularly, I’ll just leave it at that,” said Mr Jennings.

I asked Ms Wakefield, via a spokesperson, when the public would get to see the plans, which is when I learned that they will be released tomorrow.

If they are not going to be shared in a timely manner, allowing for public feedback, why was this decision made? I asked.

Which is when I was referred to the 2017 consultation, with no further explanation on why the public has not been given a chance to comment on what’s happening in the heart of its town.

Any ideas the public might have now will not influence how its money is going to be spent on this endless and so far fruitless tinkering with the CBD, and the Mall area in particular.

From the sparse council references to the project, I knew that it involved shade structures, lighting, “activation zones”, and the Kwatja water-play park.

I asked for clarification on what is meant by “activation zones”.

I learnt that there will be one, by the river at the end of Parsons Street.

It has good natural surveillance and will be well-lit and visible at night, I was told.

Its features include shading, seating, police CCTV, lighting, USB charging stations and CBD WIFI connectivity during the day, and water misters for use during the summer.

I also asked if shading for the overall CBD project includes tree-planting (so sorely needed) and was told it does.

Watch this space tomorrow for more detail, including visual plans.

Who knows, perhaps we will all be pleasantly surprised by the government’s input into our public spaces.

The proof will come with their use, as it’s people not infrastructure (and not street art either) that make a place vital.