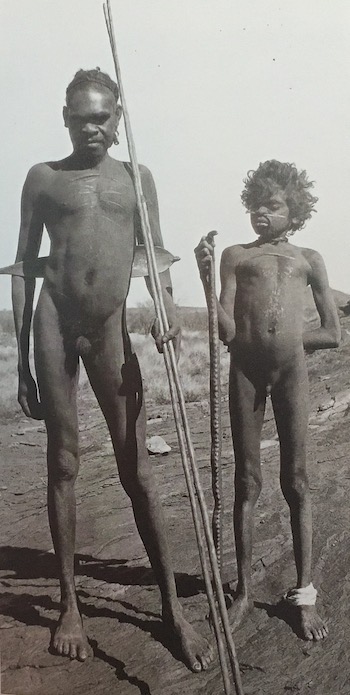 Any person who can establish genetic link to Australia in 1787 may be acknowledged, honoured and respected, by official recognition as a First Australian.

There is constant debate about Aboriginal Affairs and I make some hopefully positive suggestions on semantic issues, as the nation looks for positive ways to “close the gap”.

As we should, for it is not a gap: it is a chasm. We certainly need to be thinking big, to allow meaningful interpretation of our history, going back centuries in reflection.

Left: Luritja man, Nanatugubra, and a young boy, Nanabanji, photographed near Ilbili rock-hole, June 1931. Nanabanji is holding a sandhill carpet snake, kunea, which he killed for food. [Outback evangelist Ernest] Kramer had earlier treated the boy’s sore knee, placing a bandage around it which had slipped to his ankle. Source:  Images of the Interior by Philip Jones.

My first semantic suggestion is that we forget the word “treaty”.

Treaties are invariably drawn up by conquerors purporting to help correct, perhaps rehabilitate former adversaries. They are inevitably one sided and often counter productive.

I suggest “mutual recognition” be the quest for procedure and that an Australian word be established.

Forget “Makarrata” though: whitefellas can’t pronounce the word properly and it is not an appropriate word in any case.

A makarrta (note spelling) is a trial by ordeal, involving blood letting. I know a few appropriate Australian words suitable to promote mutual recognition, but as I am not a First Australian, I am thereby not authorised to advance them.

All other residents of Australia may be referred to as Australian, if it is indeed an established fact that they are Australian citizens.

So I propose that, in all official debate, we concentrate on using “First Australian” as a means of identifying First Australians, who collectively have the right to national recognition. Exclusively.

There are many other contentious words in use; let me discuss these.

One constantly hears the word “indigenous” and I’m occasionally amused by “indigenity” and “indigeneity”.

The dictionary tells us that indigenous (adj.) is used to describe people and things “originating in and characterising a particular region or country”.

Now Pauline Hanson and many other people insist that they are “indigenous” Australians, on the grounds that they were born here. Good luck to them.

Aboriginals of various skin tones claim the word as exclusive to them. Good luck to them too. But I would argue that a person or plant cannot be “part-indigenous”.

A ghost gum is indigenous. Kangaroos, emus and koalas are indigenous. Almost certainly Vincent Lingiari, Albert Namatjira and Truganini were indigenous Australians in the true sense. Roses, gladioli, horses, cattle and sheep: noice, but not indigenous.

There are probably 20,000 people in Australia who, today, could accurately be classed as indigenous, but that takes us into the apartheidish business of splitting hairs and counting drops of blood.

Nowadays one hears all sorts of people describing themselves as “indigenous” and they mean “possessed of a non- Caucasian skin colour”.

As well as First Australian people of mixed descent, Polynesians, Africans, whatever, use the word “indigenous” to describe themselves – often with the assertion that they thereby deserve special treatment. Forget it. 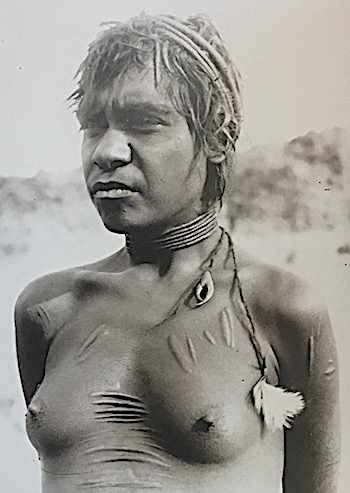 Even the words “Aboriginal” “aboriginal” and “aborigine” are likely to confuse matters if we seek to talk positively about social progress in Australia. Of course it is fair and accurate to say that “Aboriginals (with a capital “A”) are Australia’s aborigines (with a lower case “a”)” – the country’s original people.

Right: A young Arrernte woman at Alice Springs Telegraph Station, ca. 1895. She is wearing head rings and necklets of red-ochre vegetable-fibre string with a bird claw and fur pendant. Her body bears the ornamental cicatrices regarded among Arrernte as embellishments of beauty and maturity. Source:  Images of the Interior by Philip Jones.

But the overwhelming majority of today’s First Australians are of mixed descent. They have every right to assert proudly their Aboriginality and their honoured status as First Australians; but rather than “over-identify” as First Australians, as so many people do today, they should also acknowledge other components of their DNA and behave accordingly.

Let’s think again around divisive terms like “Invasion Day”: many of the protesters have inherited the genes of the “invaders”. Let’s establish and honour a day we all proudly recognise as Australia Day. (See my early “Irritation” – February 2019 –and my reasons for suggesting 8 September as Australia Day).

We used to often hear reference to “part Aborigines” and “part coloured” people. Smart people sorted that out: “Show me where the coloured part starts”! Fortunately.

Occasionally we hear reference to “First Australian Nations” and I am ambivalent here.

There is no credibility to the notion that Australia as a continent was – prior to 1901 – ever a single “nation” in the accepted sense of the term – “a unified group in dialogue with a common language”.

The Tiwi and Tasmanians did not know of the other group’s existence. We are all aware of our nation’s sad history: only about 20 of an original 300 plus languages are viable today and, unless we take drastic national action in this respect, there will be no acceptable lingua franca in Australia, other than English, by about 2050.

But if First Australians wish to call their own clearly defined areas “nations”, that should become national practice.

The Warlpiri Nation, one group of people speaking one still viable Australian language, recognised owners of an area of land larger than Switzerland, have every right to refer to themselves as a nation.

And there are four languages in Switzerland! Mind you, the declaration of “nations” is a difficult task, so let us perhaps set a few undeniable precedents. There are just a few very straightforward cases.

A note of warning: prospective leaders of First Nations within Australia would be well-advised to maintain good relationships with the properly constituted nation known as Australia. Mutual recognition, that’s what is required. Mateship indeed!

The delightful fact about Barack Obama that the world failed to recognise was that he was brown – half black, half white – a man for all seasons and situations and a colossal bloke in the process. We could have put paid to all the stupid race debates that plague the world if we had used him as a basis of recognition.

He was a worthy man: why refer to him as the first black President, or the first African-American President? Happy birthday, Mr President.

Around these semantic quibbles, I recommend that the Prime Minister of Australia take the “First Australian Affairs” portfolio and commence discussions on a reasonable basis with reasonable First Australian people, very capable of advancing their claims for “mutual recognition”.

We might be pleasantly surprised at the immediate effect on national morale.

In my book Due Inheritance I recommended the election by First Australians of a First Australian Academy (cf, L’Académie Française) to present to the nation items vital for national consideration.

That did not arouse any interest, but I suggest it as the best approach for a First Australian Voice to be heard.

The much-vaunted Uluru Statement seemed to seek a referendum to propose First Australian representation in Federal Parliament. I suggest that any referendum seeking to affect First Australian issues has a snowflake’s chance in Hell of getting national endorsement.

The 1967 Referendum was a total aberration. The Parliament could set up an Academy with a single bi-partisan stroke.

The reader should be made aware that in the 1950s I worked for the Native Affairs Branch of Northern Territory Administration.

It was common at that time for Aboriginal people to be called “natives” and there was shameful counting of drops of blood to create pejorative terms like half-caste, quadroon and octoroon.

I feel terribly sad about that: we muruntawi (whitefellas) certainly had better opportunities. But in 1974 I resigned, to make way for the many young First Australian people that I had helped train to be the proper advocates for a better deal for their people. Bring it on!


Note: Images of the Interior by Philip Jones was first published by Wakefield Press in 2011. Our review here.

Ted Egan lives in Alice Springs. He was a member of the First Reconciliation Council. He wrote the song ‘Gurindji Blues’ in 1969 and recorded the song with Vincent Lingiari and Galarrwuy Yunupingu.