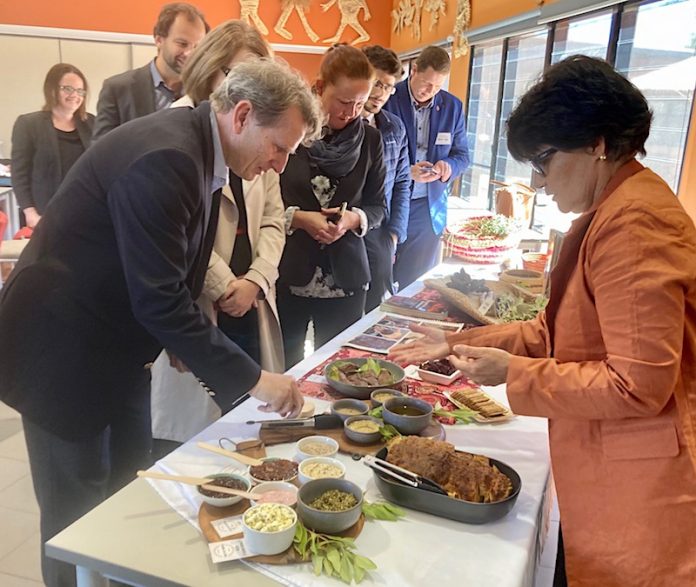 Bush food from The Centre seems set to play a role in international export and investment as relations with China are in turmoil and Australia is negotiating a free trade agreement with the European Union (EU).

A 19 member delegation from 14 countries – ranging from Germany, France, Italy, Spain, Poland, to the new ones, like Estonia – were in Alice Sprigs yesterday.

The group was headed by the German ambassador of the EU to Australia, Michael Pulch, in search of “opportunities for trade and investment”.

Asked for what he regarded as the highlights he named a demonstration and tasting of bush foods by Rayleen Brown, co-founder and owner of Kanga’s Can Cook.

He said blending traditional foods with modern cuisine in Europe would “enrich” the food.

“I am convinced there is a market for these type of products in Europe.

“There is a strong vegan development in Europe, and many of these products would fall exactly into these type of categories.”

Aboriginal art came a close second for Dr Pulch: “And of course Central Australia is the birth place of Indigenous arts, and no visit to Alice Springs would be fully consumed without having access to the fine art that is produced here by Indigenous artists.”

He described the planned national Aboriginal art gallery as a “very good idea”.

The Indigenous owned dialysis service The Purple House impressed the delegation by “how they deal with medical supplies in their care for the Indigenous population”.

Dr Pulch said the development of technology permitting the reduction of coal requires rare earths, scheduled to be mined north of Alice Springs, and other minerals: “We are very interested in diversifying our supplies.”

The negotiations started in June 2018, with the 11th round due next week. Dr Pulch says he is “optimistic” a conclusion can be reached by the end of this year or early next year.

The deal wants to engage small to medium-sized companies: “These are the backbone to our economy in Europe and in Australia,” including Indigenous businesses, traditional food, medicine and arts.