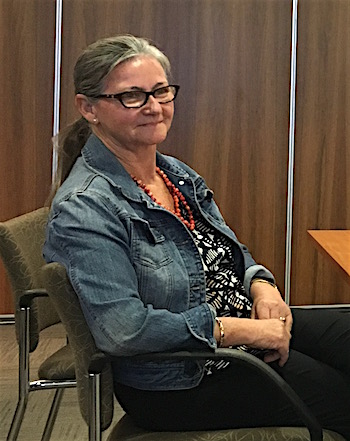 Government plans “exclusive of any meaningful consultation with the community affected by the proposal.”

As the year draws to a close these words from Margo MacGregor (left), a health and social services consultant, representing the recently formed Coalition Against Prisons in Town, summed up the local political picture: a distant government holding the purse strings, calling the shots and seemingly incapable of either listening to or communicating frankly with the people and their local representatives.

Ms MacGregor was appealing to council to help bring the NT Government to the table with the community for a thorough exposition of its plans to build a new juvenile justice facility in Alice Springs. She particularly wanted the Chief Minister Michael Gunner and Territory Families Minister Dale Wakefield to be present.

Council agreed: they unanimously supported facilitating a community forum on the subject in February next year, and to developing the invitation list in collaboration with Ms MacGregor.

But good luck with that!

In the same meeting councillors voted to write a letter to the government asking why they have not written back to the last two that council sent them.

The first, sent more than 30 days ago, rejected the high-handed demand from the government to hand over (“transition”) ownership of Anzac Oval for the government’s proposed National Aboriginal Art Gallery.

The second was sent early this month, asking the government to clarify information in its flyer distributed by mail to Alice Springs residents, headed “Why the National Aboriginal Art Gallery is being built at the Anzac Precinct”.

Among its points was the statement that the Anzac Precinct is the only CBD site allowing for at least 40,000 sqm to create the gallery, together with green space and carparking, a statement which Cr Eli Melky described as “grossly misleading”.

The government-owned part of the site, the former Anzac Hill High, amounts to only 28,800 sqm. To make up the recommended minimum of 40,000 they need the adjacent council-owned Anzac Oval.

Council logically wanted to know what site the government was referring to since council has told them of the oval, “it’s off the table”, to quote Mayor Damien Ryan last night.
If the government is going to compulsorily acquire the oval, then shouldn’t they let council and the people know?

To the substance of Ms MacGregor’s concerns:

The government has announced it will spend upwards of $18m to build a prison – her word – for juveniles within the municipality.

She said this sits outside the recommendations of the Royal Commission. It said nothing about a new youth detention facility for Alice Springs, recommending rather that the current facility be upgraded and that increased resources be put into prevention and rehabilitation.

She said the government’s communication on the subject had been “inadequate and unclear” and seemed to have sidestepped a wide consultation process with experts in the NT.

She had written to Minister Wakefield twice, seeking to meet; both requests had been ignored.

She had also attended a recent Territory Families presentation on diversionary measures. It seemed to her that a lot of “repackaging” was going on and if there is any reinvestment, it pales in comparison to the $18m for the “prison” which is unlikely to turn the problem around. (She did not mention the more recently announced staggering figure of  $67m for a “Client Management System Alignment program.)

This was why she was asking council to take the lead in setting up a “meaningful dialogue” with the government.

She said the situation touches also on a “wider issue” – the extent to which council and the people of Alice Springs have control over development decisions made in town.

Councillor Jamie de Brenni said he was 100% behind her. He also said council must follow up on questions that are put through the forum, giving previous examples of government failure to do that: a forum with police two years ago that was supposed to report back in three months, “never happened”; a presentation by the Minister (he didn’t say which one) six months ago, supposed to report back in two months, “still hasn’t happened’. 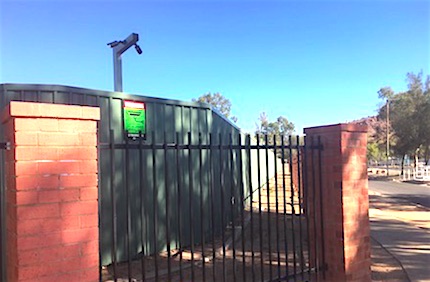 Cr Glen Auricht’s main concern was about accommodating juveniles in houses in the suburbs, about which there is a lot of “community angst”: housing these “professional thieves in amongst us” is not what the community wants.

Left: Facility in the Gap neighbourhood where young people on bail are  “accommodated”, under lock and key.

That did not seem to be quite where Ms MacGregor was coming from but her main point was that “we don’t know what’s on the cards”.

The government’s current proposal, she said, is “piecemeal, ad hoc, inconsistent”. She is unsure of whether it includes “transition houses”, but that would not not necessarily be a bad thing, if they were attached to an alcohol and drug rehabilitation program, for instance.

She said a lot of young people coming through justice system have “entrenched criminal behaviours”, others come into contact with them and pick up these behaviours, but there are others still who don’t and who would benefit from support.

A lot have experienced trauma, she said. That doesn’t excuse breaking law but it does provide some background.

Cr Jimmy Cocking said he really supported her request but was concerned that the community forum be more than an occasion to let off steam. He suggested council, as “stewards of the town”, undertake a process of engaging stakeholders ahead of the forum, including young people, not necessarily in a public forum.

Ms MacGregor welcomed the idea of a more structured process, with council taking the lead.

Cr Cocking said the issues won’t be able to be solved in one meeting, but it might improve an understanding of where everyone is coming from. He wanted to see council working on a way to deliver short term gains but also building in a longer term strategy, to reduce recidivism, and reduce the trauma that victims of crime and young people are going through.

Council has endorsed DM Paterson’s proposed Community Outdoor Space, agreed to set up a working group to take it further and for council to discuss the proposal concept and funding with the government.

Cr Banks could not get any support for waiting and considering the proposal in the context of the central area master planning council is doing; not even from Cr Cocking who has been the lead proponent of the master planning approach.

Cr Banks said council has been warned by experts about pursuing projects in isolation from a master plan; she spoke of a similar riverside park in Katherine and how it tied in with the Katherine Town Council’s inspiring master plan.

She also said the proposal “really clearly contradicts what we are working on in confidential” – whatever that may be.

“This isn’t good governance,” she said, and therefore was  “not in best interest of community”.

Cr Melky spoke of the “serious ramifications” of the cuts for town’s economy. He wanted council to protest to Qantas.

Mayor Ryan suggested talks with Virgin “might be more productive”.

He said it was “disappointing” that the government thought the changes to Qantas services were “a good outcome” for the Territory. More seats into Darwin and Yulara, but fewer to Alice “doesn’t help us”.

Cr Cocking suggested some caution given that Qantas has yet to announce where they will put their second training academy.


Note: Alice Springs News Online has asked Minister Dale Wakefield if she has ignored requests from Margo MacGregor for a meeting, twice? If so, why?

And, would she be willing to attend a public meeting, facilitated by the Town Council, to give a thorough account of what the government plans with respect to youth detention in Alice Springs and youth rehabilitation?
We will post answers if and when they come to hand.

I welcome any interested parties to engage in conversations about the new Alice Springs Youth Justice Centre. I also welcome any community-led initiatives and will attend the proposed meeting to listen and address any concerns.

Discussions and consultations have and are taking place with a range of key stakeholder groups on the potential site, as well as on a best practice model for a modern Northern Territory youth justice centre.

The next stage of development from the Territory Government will involve the contracting of a design consultant, and also the establishment of specialist advisory groups to consider the program design for the new youth justice centres.

A key requirement of the design consultant will be to consult broadly with the Alice Springs community and key stakeholders through the design and construction of a new youth justice facility.

As yet no decision has been made regarding the site.