Home Issue 8 Reverse discrimination: Views differ in the NT and the US
Issue 8Issue 9Volume 25

Reverse discrimination: Views differ in the NT and the US 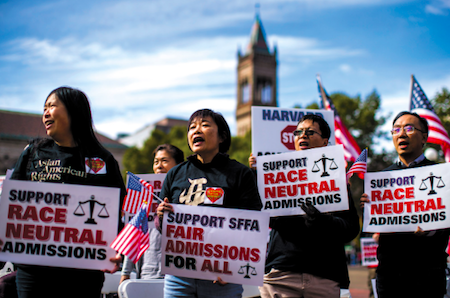 Unequal treatment on the basis of race is something the Americans lose a great deal of sleep over, while here in the Northern Territory its government, without blinking, excluded whites from three initiatives for blacks just last week.

Is there a case for reverse discrimination in the NT? As it happened the events here coincided with a piece about affirmative action in the New York Review of Books, called Justifying Diversity.

Writer Noah Feldman examines the issues on his side of the Pacific in the light of the Trump Administration and its appointment of Justice Brett Kavanaugh to the Supreme Court.

It would be fair to ask whether a parallel story in the Territory would need to be headlined “Justifying Discrimination” as three government ministers bestowed millions of dollars of public money upon people whose race was a key condition for the allocations.

By contrast, reverse discrimination (as we sometimes call it) is regarded to be proper if it is just one consideration, judging by Mr Feldman’s article about the American university admission system.

In one of the three initiatives last week in the NT Education Minister Selena Uibo provided substantial scholarships “to encourage more Aboriginal Territorians to become teachers and educators”.

Non-Aborigines need not apply for that money, of course.

American universities use “diversity” as a yardstick in their student admission policies and how that can be achieved is a complicated argument.

An unsuccessful white applicant for admission has claimed that affirmative action, if it plays a role in the admission process, violates equality under the civil rights laws as well as the Constitution’s 14th Amendment: That says no state must “deprive any person of life, liberty, or property, without due process of law; nor deny to any person within its jurisdiction the equal protection of the laws”.

Conservative judges, who with Justice Kavanaugh’s appointment are now the majority in the US Supreme Court, have used this in their attacks on affirmative action.

They have “struck down various types of affirmative action as violating the equal protection rights of whites,” writes Mr Feldman.

“These decisions undermined the rationale for affirmative action, which was, its advocates generally maintained, to make up for slavery and segregation by ensuring that AfricanAmericans (and sometimes Latinos) would be able to obtain professional opportunities that had historically been denied them.

“The conservative justices repeatedly cast doubt on this argument by saying that a sufficiently close connection between past harms and current remedies had not been demonstrated.”

So over here the question could well be asked: What progress have our Aboriginal peoples, and the government policies in interaction with them, made in areas of economic independence, employment, underemployment and the charade of work for the dole; health, life expectancy, education and crime since – say – the passing of the Aboriginal Land Rights Act in 1976, their consequent acquisition of freehold ownership of half the Northern Territory landmass, and the concurrent receipt of many billions of dollars from the taxpayer?

Writes Mr Feldman: “Justice Antonin Scalia, the most aggressive of those conservatives, went further, insisting that any classification by race for any reason whatever violated a principle of constitutional colourblindness that he ascribed to the equal protection clause.”

Before the arrival of Justice Kavanaugh the university admission issue was deadlocked and that “left the balance of power with Lewis Powell Jr, the swing justice.

“Powell offered a compromise position: affirmative action in admissions would be unconstitutional if it assigned explicit weight to race,” writes Mr Feldman.

“It would be permissible, however, to take account of race as part of a policy that considered ‘diversity’ as ‘only one element in a range of factors a university properly may consider in attaining the goal of a heterogeneous student body’.”

No such mucking around like that in the Territory.

Ministers Dale Wakefield ($5.4m), Ken Vowles ($10m) and Selena Uibo (up to $60,000 per applicant, no number of applicants given) allocated public money to people on the condition of being Aboriginal.