There was a “massive increase” in the number of glass wine and spirit bottles cashed in at the Town Council’s tip shop over summer.

It went from just under 29,000 in the previous summer (December to February) to just over 43,000 this summer – nearly 15,000 more, Mayor Damien Ryan told the government’s Alcohol Review Implementation Team at last night’s council meeting.

He also said an “unprecedented” number of plastic wine bottles had been picked up on Clean Up Australia Day in public areas between the back of the Civic Centre and Wills Terrace.

This coincided “really directly”, he said, with a less than comprehensive presence of police at bottle shops (POSIs) this summer.

He said he has “real concern” about what will happen between now and the future coverage of bottle shops by police auxiliaries, as trained Licensing Officers, announced by government yesterday. 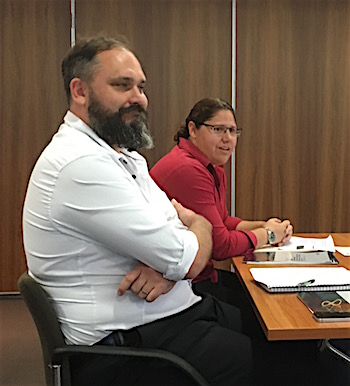 He asked Giovina D’Alessandro, head of the team, what guarantee there will be of “full lockdown” in the interim.

“I can’t give you that promise,” she said.

In fact, far from that. A “transition plan” will be built to  “phase in” the 41 auxiliaries assigned to Alice Springs (others of the 75 will go to Tennant Creek and Katherine).

She did not argue with Mayor Ryan’s use of the tip shop statistics as an indicator of increased consumption. Government has no data on alcohol sales in the Territory, an identified weakness in their data collection, something her team is working on in response to the Riley Review’s recommendations.

Consumption figures are based on information from NT wholesalers which do not capture online sales. She herself orders her wine online, she said. The team is speaking to Australia Post about how this supply source could be measured.

Neither do NT consumption figures capture the legitimate arrangements of some suppliers to source their liquor products from wholesalers interstate, she said.

Mayor Ryan said her remained “very concerned” and asked that she take the “dramatic” figures he reported back to her “area”. He reiterated the council’s full support of the Riley Review – all its recommendations – which has been conveyed in letters to the government, opposition and independent MLAs.