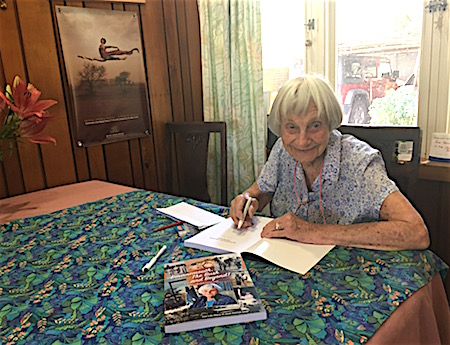 Looking at her long life, 93 years and counting, we can say that José Petrick OAM has been up for it: she has relished her experiences, great and small, and always gone forward to meet them or seek them out, not driven by a singular ambition but by the desire to live a life of meaning and value, to herself and others.

Such is my impression after reading her autobiography, Bournemouth, The Bush … and Beyond!, published by the Historical Society of the Northern Territory and launched recently at the Old Telegraph Station in Alice Springs.

This spirit took her as a young woman from her native England to the other side of the world on a working holiday. She was a registered nurse, a profession suited to her natural practicality and kind heart, but she didn’t hesitate to let it go in the interest of expanding her horizons.

She jumped at the chance to spend three months on a central Australian cattle station as a governess. Her stay on MacDonald Downs Station with Mac and Rose Chalmers she describes as “one of the happiest and most carefree times “ of her life.

This was in September 1951, before I was even born, which brings home to me the duration of her story. It really takes off from here and I think most readers will find this, even if they are not central Australians.

It’s because here she lived her most unusual experiences – they are a fairly select group of people, the cattle women and men of remote Australia – and also here that she met Martyn Petrick. They were immediately drawn to one another: on Christmas Day that year he proposed that they marry.

José does not write in any detail of matters of the heart, whether the joys of love or the grief of its loss, but between the lines about their day to day life we understand that they found great happiness and companionship with one another. They were two people pulling on the same string.

She took to station life, its exigencies and adventures. The couple were hard-working but they still took time to enjoy the country they were in, the people they met and the sweet things of life, such as music. They early spent all their savings of the time on a pianola. José paints a memorable picture of first playing it under a roof in the corner of their yard and realising there were eyes upon her – four Hereford bullocks “watching me in silent awe!”

It is in the context of her daily life that we also gain a social picture of the times, on the stations and in Alice Springs, where they go for stores and medical attention, social gatherings and entertainment at Snow Kenna’s walk-in picture theatre. José does not question things and does not often reflect upon them, she simply lays out what was going on around her as she saw it.

So in passing we hear about “Mac’s ‘boys’, as he fondly called them”, referring to the Aboriginal station hands who were undoubtedly grown men.  If we baulk at this terminology we also need to put it alongside the fact of Mac and his three siblings being fluent in the local Aboriginal language (José doesn’t specify which), having grown up with Aboriginal people as their chief company. 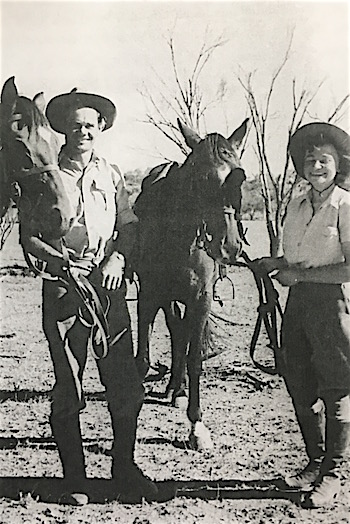 Later, José and Martyn move to Neutral Junction Station – bought by Martyn’s parents, Bill and Elsa (née Johannsen). A group of  50 Aboriginal people live just 100 metres from homestead. Some of them supply labour, the men as stockmen and station hands, the women in the homestead (“house girls”). Their lives are separate but José evokes a comfortable accommodation between them.

Right: José and Martyn on their honeymoon. Photo by Mona Byrnes, 1952.

When José goes visiting at a neighbouring station, she takes many of the women with her to visit their family and friends there. As a registered nurse, she takes charge of the clinic and dispenses medical care to whoever needs it with a down-to-earth commitment.

The government later asks that an area known as Tara be excised from the station for the local Aboriginal population, and that a school be built for the children. This seems to have been done at the station’s expense and certainly involving their organisation and labour.

We learn a lot about the technology of the times that shaped the habits of daily life, such as the kerosene fridges, initially frightening, and the early telephone service, operated for limited hours out of the Barrow Creek Post Office.

Movingly, we learn about the greater fragility of life in those days of less comprehensive medical services and under the impacts of remoteness. Martyn’s brother Werner, not long engaged to marry, died of gas gangrene, developing from a wound incorrectly treated. This was in 1960, a particularly sad year for José when she also loses her mother. They were close, writing to one another weekly ever since José departure from England, but they had never seen one another again.

A decade later, night-time road conditions contribute to the tragic death in a road accident of Martyn’s sister Margaret who lived on the station with her husband Dale Colson and their two small daughters. Martyn’s parents, Bill and Elsa, also lived on the station and this loss is a heavy toll on them and on all the family, still grieving the earlier death of Werner. In a rare reflection José writes: “People living in the bush have a comparatively isolated life. They do not have as many distractions as do people living in towns or cities, and tragedies stay vivid in their thoughts.”

Perhaps thankfully, Bill Petrick died in 1972 before suffering the loss of a third child, for José’s beloved Martyn died from a heart attack in 1974. He was only 48 years old; he and José had been married for 22 years. They had had two children, Suzette and Grant. Suzette had just begun her training as a nurse, Grant was still in school.

José does not write of what must have been a very hard time for her and the children. She is perhaps of her times and her British background in this reticence but the silence, coming after the account of a full and happy life together, has its own eloquence.

Some 18 months later she was ready to tackle the next phase of her life, moving with Grant to Alice Springs. At 52 she took up a junior cadetship with the Centralian Advocate, where Erwin Chlanda, now editor of Alice Springs News Online, was then one of two senior journalists (the other was Bob Watt). Advocate editor of the time was Tony Malone, who was initially unenthusiastic about what would become one of José’s great undertakings: a feature on the history of local street names.

This would later become a book, constantly updated and now in its fifth edition, and it contributed to her being awarded the Medal of the Order of Australia for her service to “the preservation and recording of the history of Alice Springs”.

It is not clear whether the authorities involved with the award were aware of her involvement in the 1997 campaign to save the Old Gaol in Alice Springs from the bulldozers. National Trust members set up a 24-hour guard of the site. Together with Jeanette Cook, José took the night shift, the pair sleeping in swags outside the high gaol walls. She was on hand to hold the ladder for the famed break-in by campaigners Domenico Pecoraro, Mike Gillam and an ABC television journalist, whose footage made the public aware of the gaol’s heritage values. I wonder if anything like it would happen again today!

Another episode that José records prompted a similar thought: the massive effort by the combined service clubs to set up Hamilton Downs Youth Club. There were some government grants involved but much of the organisational initiative, energy and labour seems to have come from the community. Could we again harness such community spirit?

José has had many experiences, including overseas travel, interesting encounters and personal achievements that I have not touched upon here. For that you must pick up her book, the record of a life well lived, marked by generosity, kindness and keenness. And which goes on!