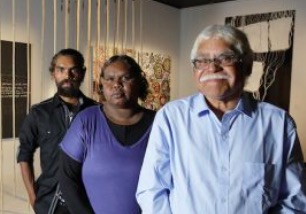 The South Australian Government pumps $2m a year into the running of APY but its chairman had to borrow a computer and email facilities from a mate in Amata on Monday to send an email to the CEO telling him he’s been sacked and he has to leave the “Lands”.

That’s the short name for the Anangu Pitjantjatjara Yankunytjatjara lands, the southern backyard of Alice Springs, 103,000 square kilometres of arid land in the far northwest of South Australia, 10% of its landmass, inhabited by 3000 people.

The atmosphere in the statutory body created by SA’s 1981 APY Land Rights Act – five years after Canberra enacted land rights in the Northern Territory – has been toxic for a long time, according to locals.

The chairman is Frank Young, an outstanding artist, co-winner of this year’s Telstra award who will tomorrow give a presentation at the opening of Desert Mob in Alice Springs, one of Australia’s most prominent cultural events.


In Mr Young’s letter to the CEO, Richard King, which was leaked to the Alice Springs News Online, Mr Young suggests Mr King hasn’t been assertive enough opposing an amendment to the land rights act.

The amendment extends indefinitely, beyond a sunset clause that had been reached recently, the powers of the SA Minister for Aboriginal Affairs to “suspend the [APY] board and appoint an Administrator for any reason he thinks fit”.

Mr Young says in the email to Mr King he has been advised by prominent QC Ron Merkel that “the amendment destroys Anangu property rights in the APY Lands and makes the APY Lands an Aboriginal reserve – of which you [Mr King] seem to think you are the superintendent.

“We will strike down the Amendment in the High Court.”

Mr Young claims that the SA Country Cabinet sitting in the Lands last week was an elaborate exercise “to mislead and deceive vulnerable Anangu people into thinking the Government of South Australia is on their side, is listening to their views, and is acting in their interests.

“Nothing could be further from the truth.

“I ask you [Mr King] to accompany me and other senior traditional owners to the Umuwa police station [where] we will ask you to leave the APY Lands as you don’t have a permit by board resolution. If you don’t leave I will seek an Intervention Order.”

Mr King says Mr Young has no authority to evict him from the APY Lands as this would require a decision of the board which had not been made.

Mr King says he has a statutory position, ratified by the Minister, under the Act.

As the statutory officer he implements the permit system. He has no requirement to have a permit, but he has one, anyway.

He says he will not be leaving the APY Lands nor resign his position.

He confirmed that he had received Mr Young’s email, and that a board meeting had taken place at Umuwa on Tuesday when 13 of the 14 board members were present.

During that meeting police had been called because of the conduct of a former board member, who attended as a community member, and ultimately left the meeting of his own volition.

That person was the previous chairman, Trevor Adamson.

The APY Lands are mostly west of the Stuart Highway and extend 250 kms south from the NT border, and west to the WA border. The administrative centre is Umuwa.

The executive board is the governing body. Its 14 members are elected for a three year term in an election supervised by the Electoral Commission of SA.

The board, which must meet at least every two months, chooses its own chairperson.