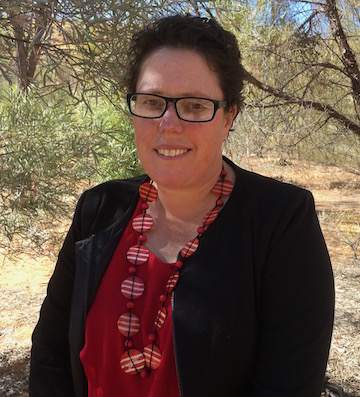 Donna Digby first came to Central Australia from Victoria when she was just out of high school. The Green Corps* offered her a stint at Watarrka, which set her on a career path as a “natural resource management practitioner”.

A decade later, in November 2008 a ranger’s job brought her back to Watarrka (King’s Canyon) where the national park was now under joint management with its traditional owners.

This 20 year association with The Centre and the kind of work she has done equip her to be “a passionate councillor” for Alice Springs, says the candidate for the forthcoming election.

From Watarrka she and husband Matt came into town, where she was supervising trainee rangers at the Telegraph Station, “young blokes”, aged 17 to 21, developing their “skills and confidence in park management”.

She then took on operations management for the Australian Feral Camel Management Program, a partnership of 20 organisations – a job that was all about “working together, making decisions together”.

Subsequent positions have been with the Department of Lands and Planning’s  Crown land management team and the Department of Primary Industry and Resources, focussed on Central Australia’s bush foods harvest (mostly by women) and its opportunities. As the NT Director of Australian Women in Agriculture, she convened a national conference showcasing this traditional form of agriculture as well as women in present-day pastoralism.

Her work history has honed her skills in relationship-building and this is particularly what she feels she has to offer in local government: her commitment would be to “rebuild relationships” between the community and council.

Some candidates are motivated by strongly held views on certain issues. Not so Ms Digby: she’s committed to Alice Springs and its future but what that future may look like she says needs to be developed in discussion with the community.

She sees the town as well provided for, “lucky” in its core services. Council’s role is to show “leadership and guidance” to make the most of new opportunities.

She mentions those that are on the Territory Government’s agenda, such as the revitalisation of the CBD and the national Indigenous art gallery: “We need to put the community in the driving seat”, “have the conversations”, “strengthen their involvement”, “work collaboratively.”

Council has a string of advisory committees with community membership. Is she saying that council needs to do more?

The committee system may be fantastic and may be enough, but perhaps more could be done: she is interested in the Kitchen Table Conversations approach that has been used to such good effect in the Victorian electorate of Indi. It activated and informed the campaign of Independent Cathy McGowan, contributing to her upset election win in 2013, but more importantly it gave her a clear and detailed picture of the electorate’s aspirations and ideas for the future, upon which to base her representation of them.

With any decision, Ms Digby is convinced that if council is open, transparent and talking to “the right people”, there will always be “a way forward”: it comes down to “leadership and accountability” but sometimes, she says, issues also take time to be resolved.