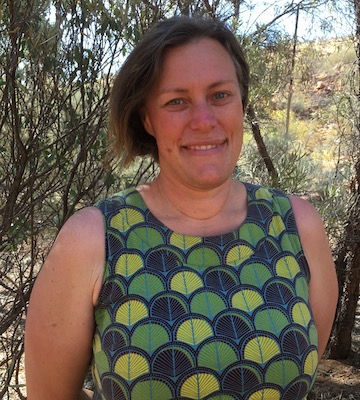 Door-knocking is one way to make yourself known in the community but for council candidates that’s a whole townful of doors to cover. One advantage of being endorsed by the NT Greens is to have a ready-made group of volunteers, in addition to friends and colleagues, ready to take on the burden with you.

It’s just one part of the process that Jodi Lennox is loving. She gets together with whoever is available on the day, they divide the streets amongst them and go through the kinds of things she wants to say to people and the kinds of answers she might give to people’s questions.

“It’s mostly mine,” she says of the message they are presenting, but there’s a strong alignment between what she thinks is important and what the Greens stand for – broadly speaking, protection of human rights and the environment.

The reception so far – from the residents of Eastside – has been positive. Why start there, when it’s already friendly ground for the Greens?

Exactly, says Ms Lennox with her trademark big smile, “we’re starting where we know we have allies” – consolidate that base and gain experience, before moving on to other areas.

She has also had a stall at the Todd Mall markets. She felt quite nervous to start with but soon found she was thoroughly enjoying it, talking to all sorts of people and hearing from them what they think is important.

People can raise issues that she has not thought about; example, a man largely confined to a wheelchair, about to start work in the CBD, spoke to her about the absence of all-day carparking for disabled people: “That’s a great one for council to work on,” she says.

As a councillor, she would want to promote things she is passionate about but equally to listen and be open to what people in the community want.

She has a strong background in community work. Indeed she grew up with it. Her parents, Colin and Sue Lennox, were the founders of OzGREEN, a multi award-winning organisation committed to equipping people, particularly young people, through education and connection, to become leaders of sustainable social change.

Between studying – for a diploma in project management and graduate certificates in international and community development and in social ecology – Ms Lennox worked for her parents’ organisation for seven years, including on projects in India and Pakistan and elsewhere in rural Australia.

Feeling the need to branch out, “to make her own mark on the world”, she then began to look for suitable work. She already knew a bit about Alice Springs through previous youth leadership work her with OzGREEN. A successful application for a job with Girls in the Centre, based at the former Anzac Hill High, made the town her new home. 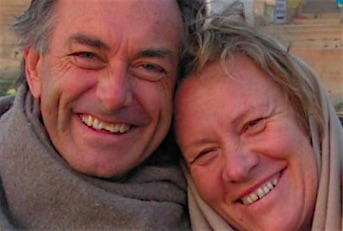 The unexpected death early this year of her father (Colin Lennox, pictured at right with Sue Lennox)  was in part the impetus behind her decision to run for council. he was only 64. It has been hard, says Ms Lennox, but it has also spurred her on to want to do more with her life, to have more of an impact.

At present she is employed by the Baker Heart and Diabetes Institute, coordinating health research projects, particularly a five year study on Aboriginal youth well-being and an evaluation of an early learning centre: “If they’re things we can get right it will make a difference.”

Youth issues are important for council, especially at the moment. What is her take?

She says one issue that unites youth across the board, black and white, is that there is not a lot to do (outside of organised sports), especially of an evening. Council plays a role – school holiday programs, its Youth Action Group – but may be able to do more.

The representative route (like the Youth Action Group) is great for getting young people who are engaged or ready to be, she says, but it leaves the majority of them out, as well as their families.

“It’s a challenge and you have to come at it from different angles,” she says. How?

By partnering with programs that are already having success, she says, giving as examples Girls at the Centre, Gap Youth Centre, the youth programs run through Tangentyere Council, and Congress.

Many existing programs effectively divide black and white. What’s the way around this? She says the best way is for programs to be demonstratively inclusive.  Once again, Girls at the Centre is a good example. Its engagement is with girls, not specifically Aboriginal girls, and when she worked there she saw “beautiful relationships growing” amongst them: “They came from different backgrounds but had a lot in common.”

Given her stated openness to community views, let’s say there was a strong demand for a night-time youth curfew. How would she handle that?

“If that was coming from just one person, I would want to have more conversations,” she says. “Really, it’s all about the broader community opinion.”

Some people are better at having their voice heard than others: getting that broader conversation as well as a good flow of information is critical.

As for her environmental passions, she wants to see council “stand with the community” in  opposition to fracking, and represent the community’s “strong voice” to the NT Government.

She’d like to see council do more – than the “great stuff” they’ve done already – towards running the town off solar energy, with “the technology getting better and better, and cheaper and cheaper”.

It should also expand its efforts in recycling, for example to include food waste.

(A November 2015 audit of Alice Springs wheelie bins found that  38.01% of the waste stream consisted of organics, including non-containerised food waste.)

She doesn’t herself raise the issue of the management of the river (the Todd and Charles systems for which council is the trustee) but has no doubt that council should look at how better to use it and take care of it “in a communal way”, including by involving traditional owners.

On the whole, her report card for the previous council in the environmental area is “mixed but doing well” on some issues, but “certainly with room to move”.

Having greater diversity of representation on the next council – and she considers her own election would contribute to this – would be a step towards realising some of these aspirations.