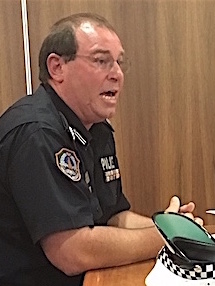 Acting Assistant Commissioner Danny Bacon (pictured) said the officer and three colleagues were conducting patrols of Anzac Hill about 2am.

“Members were speaking to the occupant of a car when a 22-year-old woman approached the vehicle yelling at officers.

“She was directed to move away, before she smashed a bottle of alcohol.

“While being arrested, the woman allegedly grabbed the female officer, dropping her to the ground. During a struggle, the officer received head and facial injuries.

“A 21-year-old woman then approached a police vehicle with a weapon. She ignored a direction to stop, and was subdued and arrested.”

This was the third time in a week officers have been injured while on the job.

“Violence should not be inflicted upon anyone in their workplace – especially those who are there to protect and keep Territorians safe,” Acting Assistant Commissioner Bacon said.