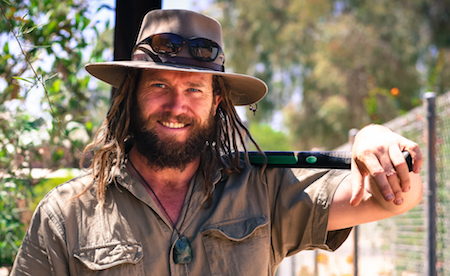 “Keeping our kids and streets safe,” better town planning, opposition to fracking, developing the “great outdoors as a world class adventure playground,” recycling and low rates are among the policies of Jimmy Cocking (pictured), Director of the Arid Land Environment Centre (ALEC), who is standing for Mayor as well as Councillor in next month’s town council election.

In a statement released this morning he says he has called Alice Springs home for 10 years and has been “working solidly for the local community since the day I arrived.

“Having dedicated a quarter of my life working towards healthy futures for arid lands and people” he says he has served on boards and committees including Watch This Space, Olive Pink Botanic Gardens, Alice Solar City, Alice Water Smart and the community garden. Mr Cocking is currently a member of Desert Knowledge Australia and the deputy chair of the Regional Economic Development Committee. He is also a founding co-director of the popular music and arts festival, Wide Open Space.

‘Those who know me understand that I am a good team player and work to get action and outcomes that benefit everyone,” says Mr Cocking in his statement.

“I have been working alongside council on a range of different projects and programs for almost a decade. I understand how local government works and I know how to get things done. I commit to working with whomever is on council.”

He wants to be a “strong voice on fracking, toxic waste dumps and other damaging proposals for our region” while “developing a world class adventure playground and ensuring our community spaces are well-maintained and improved”.

Mr Cocking says there should be no rates rises beyond CPI.

He lives in Braitling with his partner Karine and young son, Louka.

Facebook
Twitter
Pinterest
WhatsApp
Previous articleSenior Arrernte men take a stand: time to do something about young people causing trouble on their country
Next articleDrags weekend: Top Fuel team to go for record at 4:30pm