Senior Arrernte men take a stand: time to do something about young people causing trouble on their country 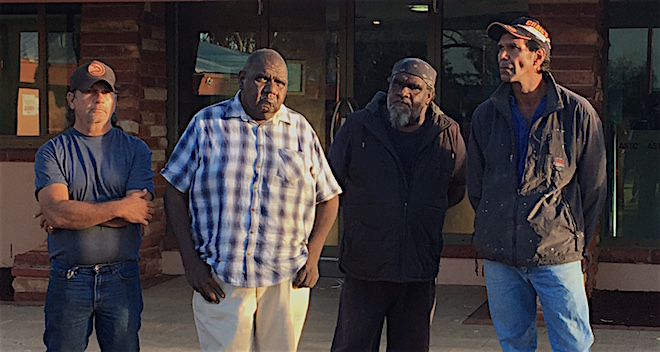 “This is not just a town,” senior Arrernte man Phillip Alice told the small but significant gathering on the Town Council lawns.

“They cause a lot of trouble and they don’t respect this community.”

He and other senior men had approached the native title holder body, Lhere Artepe Aboriginal Corporation, to  faciliate the meeting. It was time for the Arrernte nation to step up “to do something about all these young people who are causing problem in Arrernte ground”. 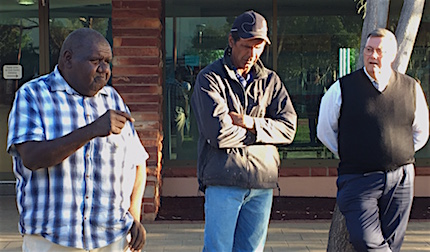 “We can’t just let whitefeller mob, non-Aboriginal people, talking a lot on newspaper, Arrernte mob need to go forward now because this is Arrernte country and we’re the leaders.”

It’s about more than talking:

“We want to try and set up an Arrernte community patrol, so they can drive around, woman and men working together, so we can walk the streets … them mob causing trouble, send them back.”

This is the Aboriginal way:

“If we go to their country, as Aboriginal people, blackfellers, we don’t cause any trouble. If we cause trouble there, they just have a meeting and they tell us ‘Go!’”

He recognised the problem of parents “not looking after their kids”: “One mob is drinking, one mob is not worried for kids … A lot of kids in town, they’re just running around, they’ve got no guidance.”

Guidance is what senior Arrernte people “walking the streets” can give them.

Mr Alice was a community police officer at Santa Teresa for 25 years and he wants to work closely with police, night patrol and other organisations. He mentioned Tangentyere, Bush Bus.

Andrew Lockyer and Ken Lechleitner, representing Congress, and Kerry Le Rossignol and Greg McAdam from the Institute for Aboriginal Development were among the crowd and expressed their strong support for the “cultural authority” of the senior men. IAD also offered a meeting venue for the future as well as liaison with their Arrernte Elders groups. 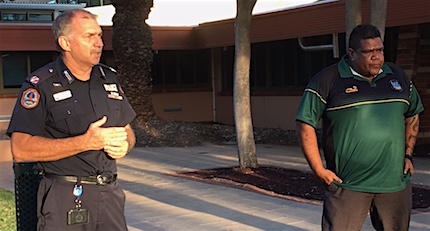 Lhere Artepe will put its own resources into the initiative although they are approaching government and private corporations as well for support. Robert Campbell, the current CEO, also said a proposal will be put to the Lhere Artepe board to reduce the hours of sale for takeaway alcohol through the outlets in the three IGA supermarkets that Lhere Artepe own.

Mr Alice said his group, “as senior traditional owners of the land,” had suggested this.

Part of the plan is also for a few of the senior men to go out to surrounding communities, said Mr Campbell, “to explain what is going on here in Alice Springs, how much devastation this antisocial stuff is causing local businesses, local people here within Alice Springs.”

They also want to work with “your surrounding clans, your Warlpiri, Pitjantjatjara and a few others to help out with the patrolling as well to alleviate some of the problems with their particular clan groups”, said Mr Campbell.

He was realistic – “We’re not going to alleviate all the antisocial problems” – but also hopeful.

Mentioning the recent events at the Peter Kittle car dealership as well as others in “the local businesses just around here, in the Plaza, in the mall”, he said:  “It’s gone too far now and we all need to work together as a collective group, rather than having individual groups, and … work as one to achieve this common goal.”

Senior police welcomed the initiative as a “positive step”, showing leadership and taking ownership of some of the problems.

“This is not a night patrol, there’s no legislative powers, locking people up,” said Commander Tony Fuller.

“It’s more about reinforcing to visitors to this area, to say, hey there is cultural obligations on you when you are on this land.”

With Mr Alice, they had talked about a model for the community patrols: “We discussed getting shirts, maybe only coming out when there’s problems or a greater influx of people in the area rather than a 24/7 patrol.”

Member for Namatjira Chansey Paech acknowledged “our Elders here, they’re my family, I respect them”. He also said they need help: funding for “cultural programs for our kids that are in care and don’t have that cultural responsibility handed down to them because they are removed from their families.”

“When you are disempowered you do run amok,” he said.

The group had already done some thinking about that, said Mr Campbell, about being proactive, not just reactive: “There’s a few individual senior men that have stations … they can actually do stuff, exactly what you are talking about, doing the cultural stuff, getting them out of town, overnight camps, if not weekly camps.

“There are people out there who have put their hands up and are willing to do that.”

Matthew Palmer, who lives at Corkwood, an outstation north of town, later told the Alice Springs News Online that he is keen to be involved with this. He also commented that it is not only businesses and property owners who are hurting as a result of the recent disturbances.

“They are burning our sacred sites, this is a big reason for what we are doing,” he said, expressing particular hurt about the recently destroyed trees south of the Gap, “totems for us Arrernte people”.

“This is linking us with the business people, we are all in pain,” he said.

Mayor Damien Ryan expressed the Town Council’s desire to work with the group. For example, it might be possible to involve some of the senior men on occasions with the nightly youth pickup service, run jointly by  Council and Congress.

Jimmy Cocking, from the Arid Lands Environment Centre, asked about the possibility of a deeper engagement between senior Arrernte people and the council. While it is great to see the senior Arrernte men taking a lead, he said it is a shame that “the only time we have this engagement is when stuff goes wrong”.

With discussion at federal level about having an Indigenous voice to parliament (the proposal the Referendum Council wants to have put to the Australian people), what about having an Arrernte voice to council “to help council to work in ways that are more culturally appropriate?” asked Mr Cocking. 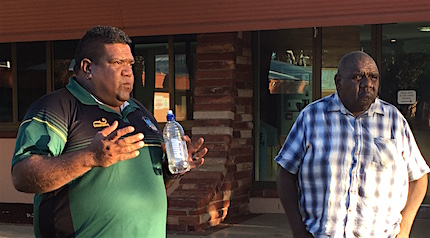 There is a memorandum of understanding between council and Lhere Artepe, said Mr Campbell: “We’ve had a few talks now, one particularly last week.”

He also spoke of Lhere Artepe’s work on creating a rangers group “not just to concentrate on the river corridor and our sacred sites, but trying to educate people as well, going around to local schools and anywhere we get invited to, to talk about the importance of Alice Springs to Arrernte people, giving the cultural perspective that our senior men and women have, how much it means to them. That story hasn’t been getting out.”

Councillor Brendan Heenan asked how the senior men were going to approach the kids on the street, to communicate  with them about learning their culture, their Aboriginal ways and law.

Mr Campbell said some of the senior men will take younger siblings with them to “have that communication at that level, rather than at a senior level, we need to accommodate all scenarios, older, younger, middle-aged as well.”

K K Akarana (Akers), instigator of the community group called FOCAS (For Our Community Alice Springs), made a strong point about not leaving behind “the kids who are doing the right thing” because  “we are so concentrated on the negativity that is happening at this stage”.

FOCAS gets 10-12 volunteers – “multi-ethnic long-term residents, people that understand the differences of Aboriginal law and white man’s law” – most Thursday, Friday, and Saturday nights, doing foot patrols in the CBD, keeping an eye on the kids in the streets and coming out of the disco at Youth Centre, talking to them.

The majority aren’t the ones causing the trouble, she said, but unfortunately they are “painted with the same brush” as the minority.

“Some kids will go home, some won’t, they don’t have a home to go to or they refuse to go home.”

Ms Le Rossignol said she also hears from kids in schools that what they need is “a safe place to sleep at night”. She said having a youth centre for a few hours is “a bit of a bandaid solution”.

Ms Akarana suggested that when the youth bus service finishes at 11.30pm, the majority of kids are still on the street. Until there is an after hours facility, “where are you going to take them?”

“This is the stuff we want to hear,” said Mr Campbell. “It’s something we can work on, a strategic plan to do that, in the safest way.”

Ms Akarana thanked the men for “stepping up”: “A lot of people tend to think, especially on the social media, you aren’t trying enough. This is going to make a massive difference.”

But Mr Campbell said it was not about “trying to feed social media”: “For us, it’s about senior men wanting to making a difference on their own country.”

Shane Lindner, one of Lhere Artepe’s directors, who had stood alongside him the whole time, wrapped up the meeting with two words: “Let’s start!”