The Top Fuel dragster in Alice Springs at its first pass today.

“Not really. The car can go a lot faster than that. We want to run a four second pass by the end of the day.”

So says Phil Lamattina, manager of the Top Fuel Racing team, when asked whether he was happy with his rocket’s first pass at 12.30pm.

His team is the star attraction of today’s National Drag Racing Association fixture in Alice Springs, with 76 entrants from all states.

The ear-splitting Lamattina machine was clocked at 5.51 seconds early this afternoon, at just over 200 mph for the quarter mile.

The driver is Kelly Betts (pictured) wants to do better.

She says she started racing at age 10: “I was born into racing, My family was always into it.”

Does she get scared?

“There’re moments when you do get scared but you just can’t be scared. You’re in there and you’ve got to be prepared for anything it might throw at you. Being on fire and the throttle sticking is probably the worst possible scenario. You deal with it at the time.”

Mr Lamattina was in the car twice when it broke up at 500 km/h. How did he feel? 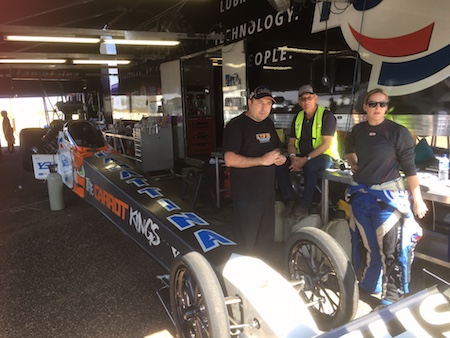 “Could have been better,” he said today.

“The earth shakes. Kids will start crying. Men will say you’ve got to be kidding, how can that happen?”

She’s one who commands 10,000 horsepower and reaches 521 km/h in 4.66 seconds, consuming 45 litres of nitromethane in one-twelfth of a minute.

Her name is Kelly Bettes and she will be the star of the Desert Nationals in Alice Springs this weekend.

Her body weight times five will be pressed into the back of her seat at the hit of the throttle, and strain the harness at the blossoming of the chute.

And the strain on the car is such that much of it is dismantled after each race to check and replace parts.

Her Lamattina Top Fuel Racing rocket, which has reached the third fastest speed in the world over the quarter mile, will have the last pass tomorrow, one pass in the early afternoon on Sunday and the last pass of that day.

The crowd will have their fingers crossed for Ms Bettes (pictured): The dragster she’ll be piloting snapped in halves with owner Phil Lamattina inside, at 500 km/h, twice.

After that his family insisted he hire someone else to drive, says Mr Probst.

PHOTO: Bettes with Lamattina (left) in the pits today.