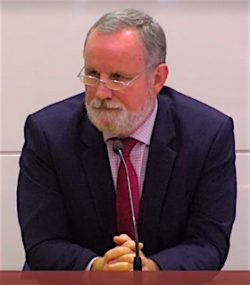 Former Minister for Families and Children John Elferink (right) has been taken to task by Commissioner Mick Gooda over the issue of forced and underage marriages in  “a number of language groups”.

He had been asked in his statement for the NT Royal Commission, presently conducting hearings in Darwin into issues of child protection, to raise any concerns relating to child protection policies, priorities and practices. This was one.

Commissioner Gooda (below left) said that as the commission has visited communities around the NT, Aboriginal people have consistently expressed their willingness to talk about and take responsibility as parents for problems confronting their children but “not once have they mentioned underage marriage”. 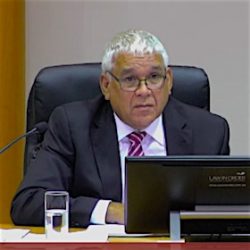 Mr Elferink wanted to know how often a question was “asked about cultural marriages specifically”.

There was no answer to this.

Counsel Assisting the Commission Peter Callaghan SC challenged Mr Elferink on the timing of his comments – why hadn’t he raised the issue earlier in the commission’s process?

Commissioner Margaret White was also concerned that the commission may have missed investigating this practice.

Mr Elferink said his anecdotal evidence came from the time (1997 – 2005) he served as MLA for McDonnell in Central Australia, in Western Desert country, and he said a number of criminal trials arising out of the practice have come from other communities.

Mr Gooda referred to the NT Intervention having occurred since then and suggested that Aboriginal people may have already addressed the matter.

Mr Elferink said than when he spoke to Alison Anderson and Bess Price, two former Central Australian Aboriginal MLAs, they told him the practice hadn’t gone away. If communities have addressed it, good, but he would “welcome them saying so publicly”.

Jacinta Price (right), daughter of Bess Price and filling her mother’s shoes as an outspoken defender of the rights of Aboriginal women to live free of violence and coercion, told the Alice Springs News Online that she is appalled that Commissioner Gooda would so readily dismiss forced and underage marriage as a concern.

As long as male initiation continues, promised marriages will continue, she says.

She says she is personally aware of its continued practice. She says it is often used “to pull a teenage girl into line” if she is seen to be “playing up”. Their promised husbands, who can be decades older, are “expected to sort them out”.

However she says some young women are refusing to submit and are “getting their own way” through forming a relationship with a younger man.

Mr Elferink also raised, under the same heading as underage marriage,  boys’ initiation practices which he said could result in genital mutilation – a matter of concern.

Mr Callaghan reminded him that as Minister, when asked to comment on a reported case, he had said that it was not a matter where the state could interfere “because it’s a free country”.

He also said he had taken the advice of professionals on the issue, that that advice reflected government policy at the time, but his personal opinion was otherwise.

He was challenged again on this particularly by Dr Peggy Dwyer, representing the North Australian Aboriginal Justice Agency (NAAJA). She put to him that the two cultural practices referred to “have nothing to do with the protection policies, priorities, or practices of the Government”, which was what he had been asked about.

Mr Elferink replied: “I thought about raising these issues long and hard, and it would have been easy for me not to talk about them.  But I thought, and I hoped, that the Royal Commission might turn their minds to it and Aboriginal elders turn their mind to it, because it gives them an opportunity to set a benchmark of acceptable and non-acceptable behaviour.”

Dr Dwyer put to him that “empowering Aboriginal communities with strong culture, connections is the way in which children are best kept safe in the Northern Territory”, but Mr Elferink was not ready to agree: “I don’t know if it is true by virtue of the fact that the vast majority of children that come into our system come from these remote areas and regional areas, and Aboriginal families in the urban areas.  If I’m going to be guided by the evidence of numbers alone, then the fact that so many Aboriginal children are in the custodial environment in terms of protection environment is indicative that those cultural practices are not succeeding.”

Dr Dwyer challenged him on the cultural insensitivity of his remarks but again he pushed back: “There has got to be a baseline of what is acceptable child protection.  There is a battle here between cultural rights and the human rights of the child.  And I will always prefer, in those instances, the human rights of the child, irrespective of which culture we’re talking about.”

Mr Elferink asserted repeatedly that he thought these practices were issues the Aboriginal leadership should address.

Earlier Commissioner Gooda had  pointed out that since the NT Intervention,  cultural practices could not be relied upon as a defence and that underage marriage is dealt with as sexual assault. He put to Mr Elferink that “only four per cent – and it should be zero – but four per cent of Aboriginal children in care are [there] as a result of sexual abuse”, a percentage lower than for the non-Aboriginal community.

Said Commissioner Gooda: “The proposition I want to put is, given that it’s now treated as sexual assault, and there’s such a low rate of sexual abuse as a reason, don’t you think leaders might already have changed?”

Mr Elferink: “The practice, as I understand it, still continues and that’s the message that I want from leaders.”