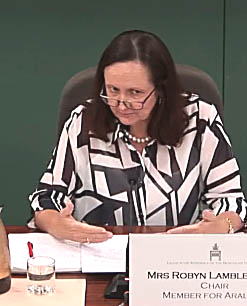 Sir – I have resigned from the Estimates Committee because Labor has turned the whole Budget Estimates process into a farce.

In all reality there will only be time to ask as few as 4 to 5 questions on each area, depending on the length of the answers Ministers choose to provide.

This all makes for an estimates process that does not allow for proper scrutiny of Government. I believe Territorians deserve better.

In the May sittings the Labor Government changed the Budget Estimates process from 60 hours to 30 hours in June. In exchange they have added 30 hours of questioning on Annual Reports in November, which has a limited scope.

The Budget estimates process is the best opportunity we have in Parliament to ask the difficult questions and to drill down and find out what is really happening inside government. It is wrong that this new Labor Government is running away from scrutiny.

This Government is not opening the Parliament up to the people. It is actually shutting it down, and instead of being a part of this this sideshow I will be submitting all my questions as formal written questions through the formal Parliamentary process.

They say: “These steps are in stark contrast to Labor’s promise it would restore trust to Government.

“How can cutting Budget scrutiny by half and inflicting the Government’s own schedule on those responsible for holding them to account be fair, open or transparent?

“Labor’s Budget delivers the biggest deficit ever in the Territory’s history, but the shortest time for Ministers to be scrutinised. What does this Government have to hide?

“In order to make a very clear statement we will not support a sham process, we announce today we are stepping aside from the Estimates hearings until Government listens to – and acts upon – the very reasonable concerns we have raised.

“In acknowledgement of the hard work done by Territory public servants, the Opposition will provide the Clerk with written copies of the questions we have prepared for Estimates.”