It's not just another inquiry: Royal Commissioners 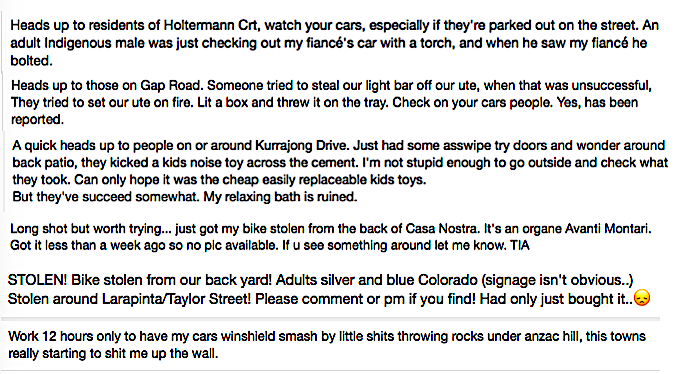 A town under siege mirrored in recent Facebook posts: What can we expect from parents of rampaging delinquents? Margaret White and Mick Gooda, who are heading up the Royal Commission into the Protection and Detention of Children in the Northern Territory, respond.

If not now, when?

This was the question Royal Commissioner Margaret White AO put before a small crowd at a public meeting in Alice Springs yesterday afternoon.

“This whole historic moment is upon us and it may well be the win we’ve been waiting for,” she said, signalling that the Royal Commission into the Protection and Detention of Children in the Northern Territory will go well beyond its title.

“It’s a pretty big ask to expect people to tell you their experiences when we are the last in a long line of inquiries that have done that and, in sense, their confidence has been betrayed because nothing’s made a difference,” said Commissioner White, making it clear that her current task will be “a very important one in my life”.

“Writing a report and handing it to the government has been done many times in the past and it won’t work.”

A young woman describing herself as a front line worker suggested that “there is quite a lot of information that hasn’t been passed on to the Royal Commission” by Territory Families.

Commissioners White and Mick Gooda, encouraging the speakers to call them Mick and Margaret, said they had no concerns about the cooperation by the NT Government.

The commission can give notices to produce documents to the NTG, they said, and “hundreds of thousands of documents” had already been produced to the commission tipped to cost $50m.

“We don’t feel things are hidden from us. This government wants the commission to come up with some really workable recommendations.”

The commissioners also want  people in the community to come forward with ideas: they can take advantage of the current sitting in Alice Springs (at the Convention Centre until Friday) to ask for private hearings or speak with commission staff (easily identifiable by their yellow or black lanyards).

Mr Gooda said he wanted to stimulate “appetite in the Aboriginal community to do something … that’s what we’ve got to concentrate on here,” he said.

In a chaotic and uncoordinated public funding regime “80 service providers can turn up” in a community.

“They literally bump into each-other [with] little input from the Aboriginal community where the money should be spent.”

Both commissioners gave a comprehensive answer to a question about parental responsibilities asked by the Alice Springs News Online, against a background of yet another volley of stone throwing, and gangs of children in their young teens roaming the streets at night, stealing cars and using them in ram raids.

Above:  The small crowd at yesterday’s forum.

GOODA: How do I answer that? We’ve certainly had a grandmother come before us in Katherine, so [are you] suggesting we should lock up the parents because she is sick of going down to the court house with her grandchildren, and taking them to school. I wouldn’t be recommending that.

Our terms of reference go to what the government’s done. I think we won’t bring parents before us to cross examine them about their failings, I can almost guarantee that.

But we will be looking at the systems that should kick in when children are at risk. International standards are the state, in this case the Northern Territory, has the ultimate responsibility for the welfare of children, in the absence of anyone else stepping in.

There are going to be cases when kids should be removed. You’ve got to put them in a better place than they are coming out of. Our job is to look at the terms of reference, it’s around the Youth Justice Act, around the failures of the child protection system. That’s what we’ll be looking at.

WHITE: The issues you raise are two-fold. One is the issue of support for failing parents. That’s true for all parents, whatever their colour.

Parental support seems to be more needed today than ever before and there are some successful parenting programs, some of which are particularly adapted to Aboriginal families, addressing early the problems which lead to challenges in families. This is something that everyone who has spoken to us is advocating for.

It’s evidence based and often for very little money in terms of resources, rather than the incredibly expensive process of removing children, so parental support [is needed] where there are perceived issues.

The other [issue] is to embed in a much more coherent way the concept of kinship care, and [how] the wider family and community can play a part if it is permitted to do so in resolving the many of these problems.

If the biological parents are not up to it then there are a whole host of family and wider family that can do so. It requires an understanding by government that there is a different way of looking after children, and in that way families will come to accept responsibility for children, rather than just biological parents.

We hope that those Aboriginal and Torres Strait Islander experiences of family and kinship may be in fact reflected in other parts of our community which don’t have that long tradition. So we think that’s the way you make them in a sense answerable, by finding solutions not just talking about the problems.