The unfinished business of Sorry Day

Above: Hope for the future, children from the Sadadeen Primary School Choir singing at the Sorry Day commemorations.

The trauma of forced separation for Indigenous children and their families was remembered at the Alice Springs Sorry Day gathering last Friday on the Flynn Church lawns.  The occasion also marked the 20th anniversary of the Bringing Them Home Report on Australia’s Stolen Generations.

William Tilmouth, speaking to the gathering,  recalled the apology to Indigenous peoples made by then Prime Minister Kevin Rudd on behalf of the nation in February 2008, which was “especially for the removal of Aboriginal and Torres Strait Islander children from their families, their communities and their country”. 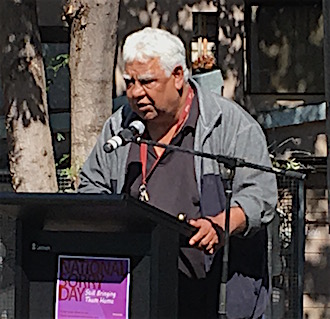 The apology was “a first step”, as Mr Rudd himself said. Indigenous people are still waiting for the second step, said Mr Tilmouth (at right), which is to have a say in the control of their own affairs.

Mr Tilmouth also decried the advent of a new Stolen Generation with steeply rising rates of removal of Indigenous children from their families. The current hearings by the Northern Territory Royal Commission, focusing on the child protection system, may reveal a clearer picture of this situation, but the stories told last Friday were stark reminders of the ruthless system of the past.

Ten people from Pat Ansell-Dodds’ family were removed across the decades.

Her father was put in a home at the back of Stuart Arms before being put to work on a cattle station.

Her mother was caught near Ryan’s Well (near Aileron), tied to a tree by a policeman when her father was out mustering. Her grandmother was grabbed as well and they were both brought into town to the Telegraph Station. Their family tried to get them back but without success. 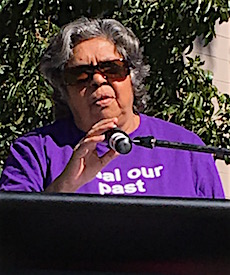 Her mother’s sisters were put in a Catholic Church mission; two ended up on Melville Island and were not allowed to stay in touch with their family.

“It affected them and the whole family,” said Mrs Ansell-Dodds (at left).

An aunty, Norma Nicker, was put in The Bungalow, then taken to St Mary’s before ending up in New South Wales: she never really came home, she didn’t know who she was or that she’d been taken there by government, she thought her family didn’t want her. Then when she was a young woman she had her daughter taken from her.

Mrs Ansell-Dodds herself and her sister were taken in the early ‘50s to St Mary’s where they spent a couple of years, until their parents managed to get them back. Her father had worked for years for the town council and he and her mother challenged the removal in court: “They said they was quite capable of looking after me and my sister.”

Much of this family history Mrs Ansell-Dodds found through research in the archives when she was doing her Bachelor of Arts degree.

“People think they know you, but they don’t know your full story,” she said. 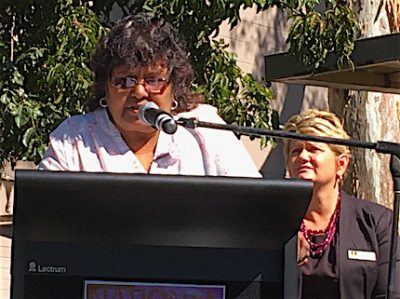 Margaret Furber was taken from Gap Cottages when she was eight years old. She was living there with her grandparents while her parents were away working. Her grandmother came home from work and found she was gone.

At right: Margaret Furber, Tracey Brand in the background.

Her brother (Harold) and sister were taken too, far away to Croker Island. The family were not told where they were going.

On the island brother and sister were separated, and eventually this sister was taken for adoption in Queensland.

Much later, the siblings found out that another sister had been taken straight from the hospital, and adopted by a white family down south. She wasn’t told anything about her background until her adoptive mother was dying.

Some belated comfort for the Furber siblings came with a “fantastic” family reunion and smoking ceremony a few years back, assisted by Link-Up. 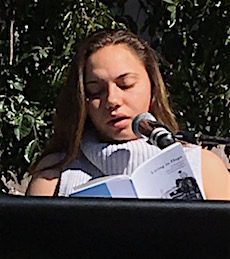 The gathering also heard from the granddaughter of Frank Byrne, Delphina (at left), who read a passage from his autobiographical account, Living in Hope, launched at the recent NT Writers Festival. He was living happily with his mother and stepfather on Christmas Creek Station in the Kimberley when he was taken at the age of six. What happened is harrowing. No explanation, no preparation: this little boy was held back physically as he saw his parents loaded up onto a truck and driven away.

We didn’t hear about it on Friday but in the short account (the first three chapters of a longer book in the making) Mr Byrne goes on to tell us that he was then turned out into a paddock “just like a poddy calf” and left to fend for himself. “I think I went mad,” he writes. The only help he received came from other removed children like him and, thankfully, a few Aboriginal families camped there who did their best to take care of them.

MC for the occasion, Tracey Brand spoke of the importance of greater awareness by the wider community of the unresolved trauma of forced separations. These personal stories drove the message home.

Below: Seven-week-old Gabrielle Stuart in the arms of her aunty, Melinda Hooper, and the ‘hands ‘ representing families affected by forced removals. Bottom: A smoking ceremony to calm, cleanse and heal was offered to the gathering by women from Akeyulerre Inc. 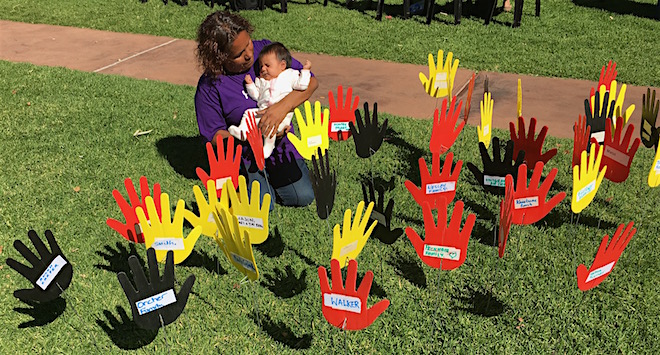 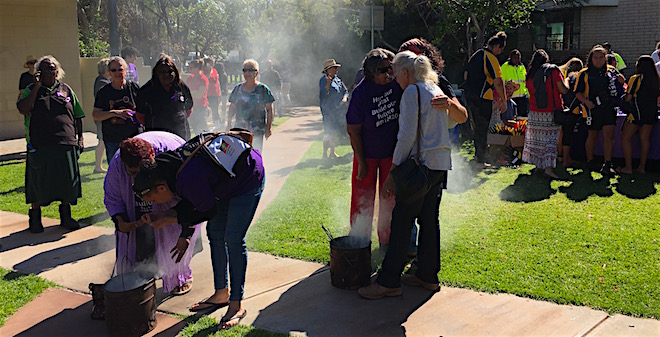