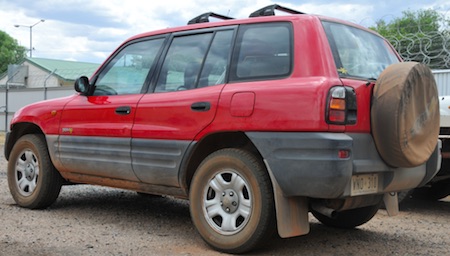 Police have charged a 35-year-old man with murder in relation to the death of a French national at Conners Well on Wednesday evening.

Only the initials of the man’s name have been released: “PV.” Police say it is long established policy to release only initials of people charged, and not to release the names of victims nor their partners.

The suspect’s name has been widely reported as Melbourne man Pande Veleski. The name will be on the public record on Monday when the local court list is published, and the man, who has been remanded in custody, will to appear in Alice Springs Local Court.

He also says the victim’s partner would like to thank the Alice Springs community for their support.

Detective Superintendent Travis Wurst is urging motorists who may have dash-cam footage of the vehicles involved, or the local area around Connor Well, to pass the vision onto police.

Police have now released images of the victim’s red Toyota Rav4 (at right).

“We are particularly interested in speaking to a man who may have been at the Connors Well rest stop about 10 minutes before this incident occurred.”

“We would also encourage anyone who may have seen any activity at the Connors Well roadside stop at any stage during Wednesday 30 November, not just in the late afternoon, to contact police.”

The alleged offender remains in Alice Springs hospital, where he is being treated for heat exhaustion and dehydration.

Anyone with information is urged to contact police on 131 444 or Crime Stoppers on 1800 333 000, says Superintendent Travis Wurst. 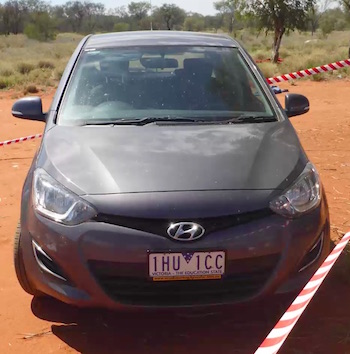 The man in custody is in the Alice Springs hospital under police guard undergoing psychiatric assessment.

The wife of the dead tourist was discharged from hospital last night, it was disclosed this morning.

Media reports this morning, unconfirmed by the police, claim that the man held by police is from Melbourne. Police said this morning they have yet to interview the victim’s wife who is in the Alice Springs hospital.

Two French tourists, husband and wife, are believed to have been at a rest stop 30km south of the Aileron Roadhouse on the Stuart Highway when they were approached by an unknown man, according to Detective Superintendent Travis Wurst.

He said: “The man allegedly stabbed the male tourist to the neck, in an unprovoked attack. He passed away at the scene.

“The attacker then fled in a vehicle. Shortly after, that vehicle was stopped by police near Ti Tree, however the driver fled on foot into bushland.

“He was arrested near Ti Tree at about 8:30am today.

“A crime scene will remain in place for the remainder of today.

“Police will continue to speak to a number of witnesses to establish the exact circumstances surrounding the death,” says Superintendent Wurst.

“The partner of the victim is currently at Alice Springs hospital where she is being treated for shock. 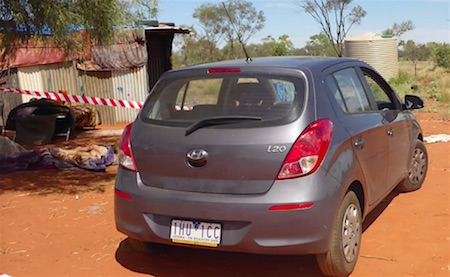 Police are asking the public for information about the movements “in the days leading up to the incident” about a vehicle with Victorian licence plates and its 35-year-old male driver.

Police released images of the vehicle this morning.

Superintendent Wurst said in a media conference it is “yet to be determined if the person is a local resident or not”.

He was arrested near Ti Tree, 200 kms north of Alice Springs, after a first-light search by helicopter.

No charges have been laid as yet. “He is currently in custody and will be interviewed in due course,” says Superintendent Wurst.

“Police ask anyone who may have witnessed the incident or anyone who was in the Connor Well rest area yesterday afternoon to contact them.

“The victims were driving a 1998 maroon Toyota Rav4.

The dead man, a French tourist, was 33 years old.

Below: The headlines appearing on French language sites.