Home Issue 9 CLP: Back to the future
Issue 9Volume 23

CLP: Back to the future

By ERWIN CHLANDA and ALEX NELSON

The Country Liberal Party on the weekend elected someone who doesn’t live in the Northern Territory as its president: Shane Stone, a former Chief Minister, and president also of the national Liberal Party.

Alice Springs CLP chairman Jamie de Brenni could not be reached for comment but the party’s candidate for Araluen in the August 12 election, Steve Brown, says the election of a “fly-in, fly-out opportunist” was the work of the old guard which all but annihilated the party and caused its drop from 16 seats in Parliament to two.

Mr Stone, a lawyer, made no secret of the fact that he came to Alice Springs in 1986 to get into politics.

Within weeks of arrival he sought preselection for Araluen – one of the four town seats at the time. 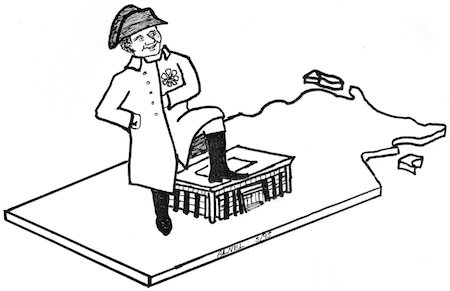 Mr Stone moved to Darwin in 1988, gained the seat of Port Darwin and became Chief Minister from May 1995 to February 1999.

His pushy attitude resulted in a narrow defeat of the statehood referendum in 1998.

Mr Stone resigned as a consequence and was replaced by Denis Burke who lost the next election, ending 27 years of CLP rule of the Territory.

Mr Stone is known as a very capable administrator and operator behind the scenes.

He likes to travel and consult widely, pressing the flesh. He’s very good one on one, very persuasive.

Judging by his earlier performance, in his bid to turn ‘round the party’s disaster he is likely to be looking for people with skills, with strong business backgrounds, a high profile.

Not much of that is likely to be happening in Alice Springs, the party’s birth place. The town now has only two seats, neither held by the CLP: The main game will be in the Top End.

It would not be a surprise if the idea of a Centre Party – centre geographically as well as politically – would get a new lease of life, mooted by tourism figure Rex Neindorf in 2008 and by ex-mayor Fran Kilgariff earlier. 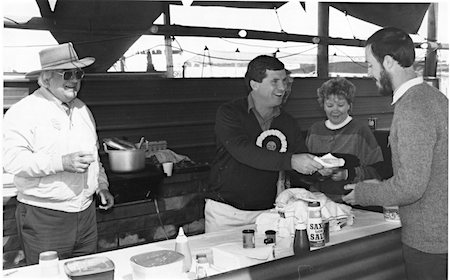 The style of governing in the NT altered during Mr Stone’s time. The centre of gravity shifted to Darwin, and Mr Stone became notorious for his gaggle of minders, many of them sourced from the Murdoch newspaper stable.

Another hallmark decision was Mr Stone appointing himself as a Queen’s Counsel.

[Alex Nelson is a local historian and a significant former player in the CLP, including being the chairman of Flynn Branch in 1990.]

All photos supplied by ALEX NELSON. From top – Chief Minister Marshall Perron and CLP president Shane Stone at the party’s annual  conference in Alice Springs, August 1988 • “Napoleon” Stone in a cartoon I drew for the Alice Springs News in 1995. Mr Stone and Bonaparte had much in common, including the first names of their wives: Josephine • CLP President Stone, manning the party’s stand at the Alice Springs Show, serving me a sausage sandwich on July 1, 1988. At left in the photo is Dave Bottrall, and at right, June Tuzewski.

By GEOFF MIERS Worms are the world's best recyclers and every home should have a worm farm. This is the ideal time to set one...
Read more
Issue 1