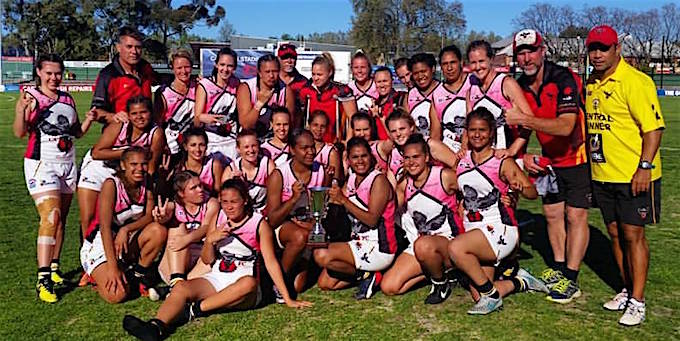 The Alice Springs Pinktails usually play 12 a side footy on half an oval. But that didn’t stop the women’s side of the Redtails from holding Port Adelaide scoreless, winning 7/3 (45) to 0/0 (0) in the Around the Campfire Cup at Norwood Oval on Saturday, playing on a full size ground.

Our center half forward Ashley Fitzpatrick dominated the game from the get go, kicking four of the seven goals and our senior players such as Kerry Anne White, Jordann Hickey and Katie Dean lead from the front with some fantastic leadership.

Game two was against the SA Indigenous side. We lost two of our key players in the first half for the rest of the tournament, being Fitzpatrick and Kelea Lovell, one of our gun mid fielders to major injuries.

The side was clearly rattled and trailing the game with only a couple minutes left to play. The Pinktails managing only five shots at goal at this stage, all being points, and the SA side whilst only hitting the score board once with a goal, lead by a single point.

Time was ticking the team started gathering momentum and our inspirational leader Kerry Anne White gathered and kicked truly, allowing the team to gain their second win with not much time to spare.

Game three against Adelaide University came at a great rate, which meant young gun Rachel Hartung had to step up and fill the shoes of Ashley at center half forward – and that’s exactly what she did.

At the age of only 15 this young lady was simply outstanding. With the team coming to terms with the loss of two quality team mates, it seemed the determination needed just seemed to galvanise the group.

They all lifted backing each other up, encouraging every effort from each other and growing as group. The Pinktails would go into the Grand Final undefeated with this game ending in a 4/4 (28) to 0/2 (2) win to the Pintails.

The Grand Final was going to be against the team we played when we lost two of our stars, the SA Indigenous Team, whom the Pinktails had only defeated by 5 points.

The ladies knew that they had played better than the score board suggested in the first encounter and you could see the belief in each other had grown.

They had been a professional outfit all day with the coach of the Adelaide Crows women’s team reinforcing this when she came to the rooms after the second round win.

The game got under way and right from the get go our captain was leading from the front and every single Centralian was backing her up in a display that had everyone at the ground thinking WOW!

Rachel Hartung finished off her inspirational debut for the Pinktails with two goals and with Sam Hoogeveen-Hill and Kerry-Anne White kicking one each the Pinktails ran out winners kicking 7 goals 7 points (49) to SA Indigenous Women’s team one point.

The day was clearly an outstanding success with the team kicking 133 points and allowing only nine points against us, but more importantly the Redtails Pinktails Right Program continues to engage our men and women in all the outcomes that it sets out to do, with 2016 being amazing results for both the Redtails and Pintails. The men defeated the Port Adelaide reserves earlier this year.

It’s our off field achievements that we are all most proud off, with more of them engaging in school, becoming employed and engaging their friends and relations in doing the same. These young men and women from Central Australia are becoming Ambassadors of Life!

The Pinktails were lead by Captain Kerry-Anne White and Vice-Captains Jordann Hickey and Katie Dean.