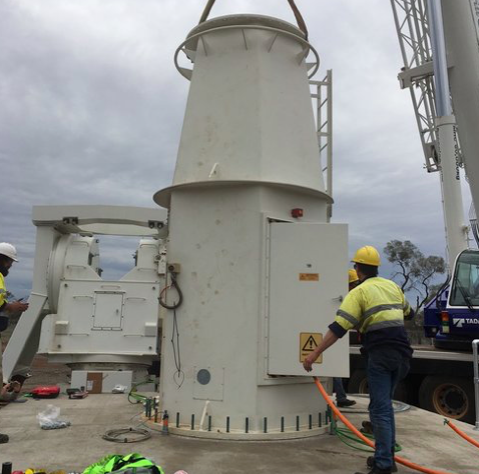 “We’re unashamed about our history. We walk into the biggest banks in this country, on projects worth hundreds of millions of dollars.

“We can go and match it with some of the biggest engineering advisory firms in the country, because we bring understanding and appreciation of what it’s like at the other side of the Dividing Range.”

The reluctant suit wearer’s office is in Alice Springs, and that makes a lot of sense: The mega renewable energy plants are not in the CBDs of Sydney nor Melbourne: They are and will be in remote areas where working and living require special skills that need to be honed over decades.

Ekistica, 14 years in The Centre, has done that, and its CEO, Lyndon Frearson (pictured), has been on board for much of it, as he told guests of Business at Sunset staged by the Chamber of Commerce this week.

The firm, whose 30 staff are now operating throughout Australia and  Asia-Pacific, started a subsidiary of the Centre for Appropriate Technology (CfAT), CAT Projects.

Fast forward to today when Ekistica manages the construction of utility scale wind and solar farms such as the  $300m wind farm in remote Tasmania.

The activity of the 30 staff, all based in The Alice, in the last three years oversaw the delivery of over a billion dollars worth of infrastructure around Australian and overseas plus “due diligence” advice worth a further $2.5m, says Mr Frearson.

The late Jim Bray, a long-time chair of CfAT, put the bush savvy underpinning the firm’s success very simply: “Aborigines are not just consumers of technology, resources and knowledge. They can export these from Central Australia and indeed from remote regional areas.

“We have to understand the issues, not the technology,” Mr Bray told Mr Frearson, as he recalled.

Says Mr Frearson: “The way we communicate knowledge and deep technical challenges is different. There are lessons to be learned from remote regional Australia.

“We built a team of people who are dedicated in their understanding of the opportunity that comes from thinking differently when you’re working in remote and regional areas.”

If there was any further proof for that it was supplied by Covid-19.

Ekistica became the first company permitted by VIASAT – a multi national satellite company – to build their dishes without being members of the company who could not travel to Australia.

Even trainees of CfAT’s were on site: “We found them, we trained them. We had live video links going back to Atlanta watching Indigenous trainees assembling satellite dishes.

“And we assembled these dishes faster than they have ever been assembled before.

“We’ve all seen the challenges of people who come flying in from somewhere else, deliver a solution and then fly out. We know how much we hate it.”

The pitch to clients is: “The people who work for you understand what it’s like to be met with something that you don’t understand, something we had to deal with ourselves.”

Like Darwin in the NT “Hobart draws most of the attention. And so we felt really at home, except for the snow and the knee-deep water, in minus two degrees and sideways mud slides”.

It makes sense to serve the South-East Asian region “all the way from here in Alice Springs,” says Mr Frearson.

“We do this deliberately. We are absolute passionate about our belief as to what can be shared from places like Alice Springs, and indeed all the isolated and remote townships across Australia, what they can do, what they can deliver around the rest of the country.”

UPDATED on April 12 with additional information and corrections provided by Mr Frearson.