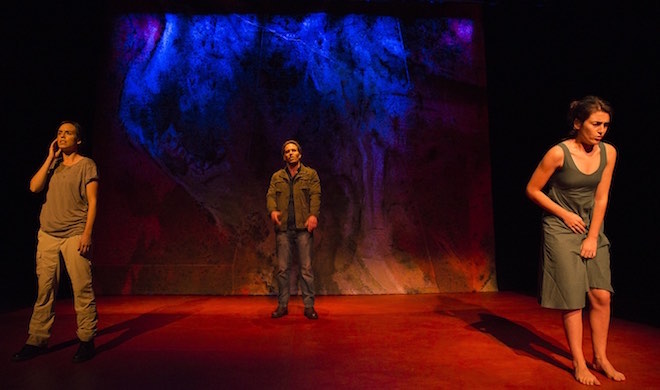 Above, from left: Shaynee Bradshaw, Gus Murray and Cilla Williams in the Knock-Em-Down Theatre production of Broken. Photo by PAZ TASSONE.

The play Broken, by Northern Territory writer Mary Anne Butler, made history in this year’s Victorian literary awards, winning not only in the drama category but also the Victorian Prize for Literature – a first for a play. To do this it had to succeed on the page, in its quality and integrity as a text standing on its own, without all the things that actors and staging could bring to the experience.

Butler achieved this by having a compelling story to tell, one that involves each of its three protagonists in life and death decisions, tightly inter-weaving the three strands and propelling them forward, line by mostly short line, so that it reads like a long narrative poem. Stage directions are minimal – a beat, a silence, a brief indication of action – so that the only brake to this forward movement on the page is the necessary naming of who is speaking.

To experience the flow of her powerful text without even this disturbance was one of the things I looked forward to in the Knock-Em-Down Theatre production of the play, presented at Araluen last week, part of an Artback NT tour after selling out eight performances at the Darwin Festival.

The play starts with a rollover on a lonely Outback road. This frightening event involving a young woman, Ash (Shaynee Brayshaw), has barely had time to penetrate our consciousness when it starts to be interwoven with another, involving Mia (Ciella Williams) who, we soon realise, is in the painful throes of miscarriage. 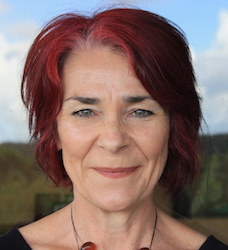 Starting at this pitch was always going to be a challenge. Reading on the page, Butler’s writing triggers you to reach that pitch with the layer upon layer that your experience and imagination can supply. In a theatre though your attention needs to be commanded by the performers and whatever stagecraft can be brought to the moment. If they don’t get you there, if there’s a gap between text and its dramatic interpretation, the whole experience is diluted.

Director Gail Evans adopted a minimalist approach, relying almost entirely on the strength of the script and her performers. In the intimate space of Brown’s Mart Theatre in Darwin this may well have succeeded. In the much larger space of the Araluen auditorium in Alice Springs, I felt the opening struggled to have the impact it needed and the performance never quite caught up with the lag in emotional engagement that this generated.

Monologue is particularly challenging and the performers were at their best when they were in interaction with one another, that is each of the women with the man, Ham (Gus Murray). They also worked well when they could slip into the lighter moments of their stories.  Brayshaw, for example, was engaging in self-deprecating mode as she tries to track down Ham; likewise Williams as she recalls how she and Ham first met. The naturalism that suited these scenes unfortunately spread to the whole text, tending to gobble it up in the cadence of everyday speech. This undermined the poetic quality of sections where the lines needed to breathe, to have their own space, and obscured the script’s many wondrously wrought transitions between the experiences of the three characters.

The scale of the Araluen stage might have also been the problem with the production’s evocation of the vast desert landscape lit by full moon, so well rendered by Butler. A painted backdrop shrank the space, when we needed to have a sense of its expansiveness.

My misgivings no doubt go to show how intimately connected a production needs to be with the theatrical space in which it is presented and for a touring show I recognise that this is necessarily difficult.

Meanwhile, I urge readers to treat themselves to a copy of Butler’s deservedly acclaimed work, published by Currency Press.