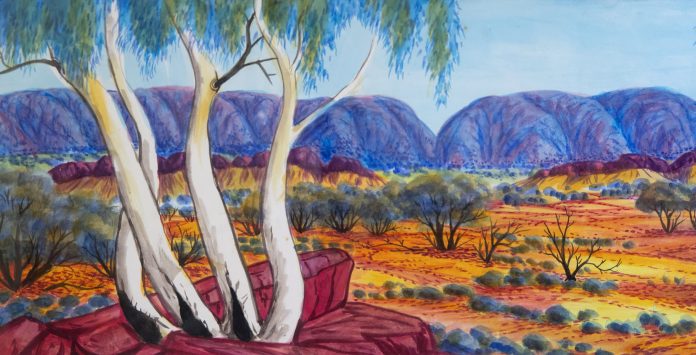 In the last year of his life, Michael Bowden OAM, well known in Central Australia after having lived many years in Alice Springs, wrote an account for the general reader about the phenomenon of Arrernte Catholicism.

Called Unbreakable Rock, it centrally examines how, over decades, the relationship between the Catholic Church and Arrernte faithful has led to a unique blending of Arrernte and Christian beliefs and spiritual practices that serves not only Arrernte people but is putting its stamp on the broader Catholic experience in Alice Springs.

For Bowden personally his investigations, equally over decades, transformed his own conceptions and practices: his faith became at least as syncretic as theirs.

Bowden’s name was made initially by his career in the AFL premier league in the late ’60s, playing for Richmond  – a great entree to the football-mad Northern Territory and an especially useful bridge-builder with Aboriginal people, who were at the centre of his professional life here, as a community advisor and teacher. The book reveals how important some of them became in his personal life too, as close friends and companions of his questing mind and spirit. 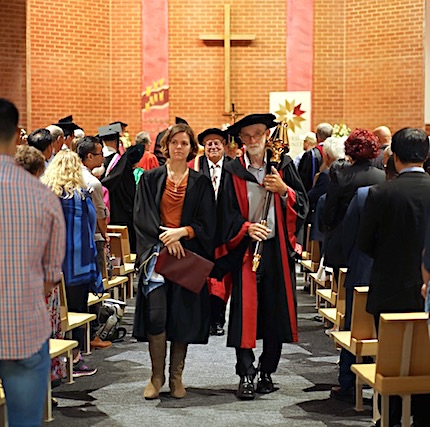 While his life was cut short by the degenerative, and at present incurable, Motor Neurone Disease  – diagnosed in 2017, he died in 2020, aged 73 – it was a life richly lived, as the book also makes clear.

Much of Bowden’s historical account of Arrernte Catholicism and his reflections on its evolution and relationship with Catholic theology is drawn from his PhD thesis for the University of Divinity, completed during his illness. By the time he graduated in December 2019 he had significantly weakened. (He is pictured here with daughter Majella, carrying the university mace, during his graduation ceremony.)

Not surprising then that in subsequently writing this account for the general reader he would take the opportunity to look back on his life more broadly. Early pages introduce us to Bowden the school boy, his emerging talent on the football field and his sense of vocation, which led to him spending two years in a Jesuit seminary training to become a priest.

He may well have become one had the church allowed priests to marry. He realised that the celibate life was not for him, but his faith remained central and active alongside football, especially in the early years, and always his wife Judy, whom he married in 1969, their six children and grandchildren and many friends. 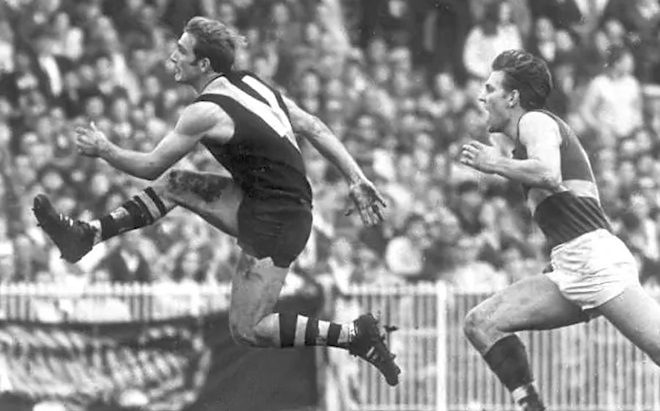 An airborne moment during his career with Richmond Football Club.

Counted dearly among those friends were Aboriginal people he met in the Centre, first at Pukatja (Ernabella), where he worked for two years as a community advisor, and later in Mparntwe Alice Springs. He became quickly fluent in Pitjantjatjara but despite his long years working with Arrernte people and his enthusiasm for learning their language, he struggled with it.

Still this is a book rich in Arrernte language and concepts. Central to them is Altyerre, “their ancient, all-encompassing and enduring world view.” He sees it as “a Creation Theology” and under its influence, his own sense of God was profoundly refigured. He stopped using the word, preferring rather the term Mystery, “which encompasses everything that can be held in the notion of God but discards the idea of an anthropomorphic ruler in heaven”.

He still cleaves to a “Cosmic Christ”, but this names something neither male nor female, beyond the historic figure of Jesus of Nazareth. It is rather “an immanent presence in the joys and travails of the universe”,  a notion not alien to Arrernte cosmology.

“Arrernte people,” he writes, “in the mountains and deserts of Central Australia similarly discovered a world view or developed a consciousness that offers a dynamic presence in all aspects of nature. They call it Altyerre.”

His guides in this search for meaning were the Arrernte leaders of the Ngkarte Mikwekenhe Catholic Community, which developed in Mparntwe in 1986 in preparation for the visit of Pope John Paul II. These same leaders, through their published and creative work as well as generous community engagement, are also the guides for many non-Christian locals, interested in understanding the Arrernte world view and perspectives on history and contemporary life. 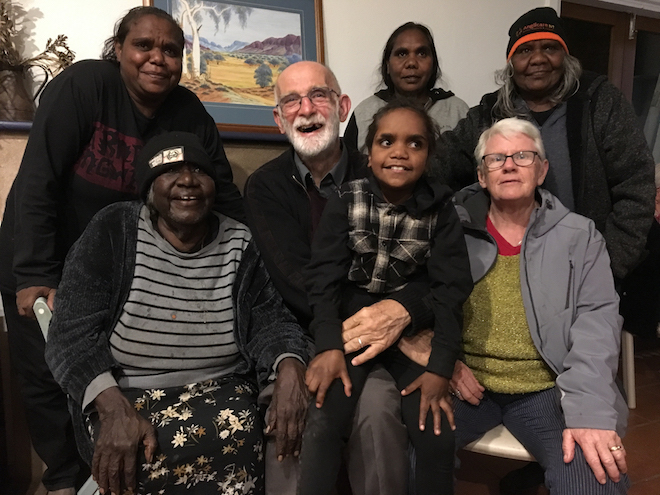 Michael and Judy Bowden with MK Turner, her daughter Shirley behind her, Shirley’s daughter on Michael’s knee, Felicity Hayes and her daughter Anna Maria.

They are Margaret Kemarre “MK” Turner, and her book (with Barry McDonald), Iwenhe Tyerrtye – what it means to be an Aboriginal person; the artist Kathleen Kemarre Wallace, author (with Judy Lovell) of Listen Deeply, let these stories in; Margaret Heffernan, author (with Gerard Waterford and Frances Coughlan) of Gathering sticks: lighting up small fires; and artist Therese Ryder, who, “full of Arrernte wisdom”, spent much time with Bowden, story-telling and exploring language and cultural  concepts (they are pictured together below).

Her paintings were also inspirational for him – one of them hung above his desk as he wrote the book and now adorns its cover. It expresses, he writes, “‘Country in Mind’, a key Arrernte concept that permits Arrernte people estranged from their land to remain spiritually enlivened by it”.

It worked like that for him too, far away in Darwin at that time. (Titled Tyuretye – McDonnell Ranges, a detail is reproduced at top.)

A rewarding vein of the book for anyone interested in Central Australian history is Bowden’s account of the Catholic Church’s relationship with Arrernte people over the years, and the way the relationship  intersected with the broader society.

He recognises good intentions and some material benefits but they came “at the expense of severe cultural damage”, he writes of the Little Flower Mission at Arltunga, describing it as a “total institution”.

Bishop Francis Xavier Gsell was then “the supreme ruler” of Northern Territory Catholics. He believed that there is no salvation outside of the Church, and under him Catholic Mission was about turning Aboriginal people into “thorough-going Catholics” as well as participants in the Australian economy and society – “at a menial level”.

Gsell was succeeded by Bishop John O’Loughlin who was hardly more respectful. In contrast to other Christian missionaries, like the Lutherans at Hermannsburg and the Baptists at Yuendumu and Lajamanu, he actively discouraged the learning of Aboriginal languages and their use for mission work. This attitude was “consistent with the prevailing government policy of assimilation”, writes Bowden.

It changed after the Second Vatican Council, with Pope Paul VI calling for Catholic evangelists to take other human cultures with “absolute seriousness”, but, writes Bowden, they might “then decide that the cultures were deficient or unsatisfactory in some aspect”, requiring that Indigenous peoples be liberated from them.

Still there were individual missionaries who began to work more collaboratively with Indigenous people, recognising the spiritual richness of their cultures and moving towards integrating their practices with Christian ceremonies.

Patrick Dodson, then a priest, the first Aboriginal man to be ordained in Australia, saw the limitations of this approach: it did nothing to change the relationships of power between missionaries and their congregation. His view, one shared by Bowden, was that people make the church, not the priest. Disagreements with Bishop O‘Loughlin on this principle led to Dodson leaving the priesthood. (He is now in the Senate, representing Western Australia). 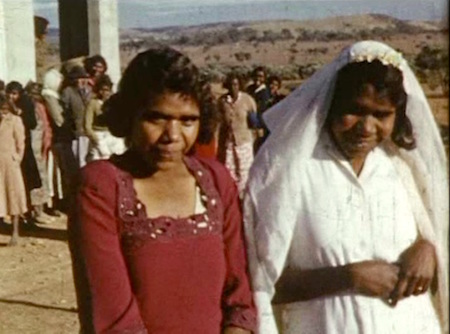 Bowden uses that power relationship lens to look at the history of the Santa Teresa Mission at Ltyente Apurte in the 1970s and ‘80s.

MK Turner (in red) as bridesmaid at Santa Teresa Mission in the 1950s. Still from the film The Stone Houses.

He finds the missionaries were poorly prepared for their complex responsibilities, especially as Arrernte people came under the intense pressure of outside influences such as alcohol and welfare payments, at the same time as embracing the move towards self-determination, asserting their cultural identity, fighting for their rights to their Country.

Some of the people resident there at the time though had their totemic Country elsewhere and that produced another layer of difficulty. They were effectively disenfranchised from local governance.

From this painful history, Bowden writes, Arrernte people at Ltyente Apurte and in Mparntwe have not only survived but are now “revitalising communities”. Part of that movement has been the way they have incorporated elements of Catholicism into their world view – Altyerre –  and practice.

They are “in bonus”, he writes, as he too felt himself to be, under their influence.

These personal and historical strands of the book are interwoven with his theological explorations, which can make for a quite demanding read. This is partly due to the language of theology, dense, academic and at times arid, especially alongside the Arrernte conceptions, just as complex but poetically expressed and always connected to Kin and Country, indivisible.

Still, I learned a lot, about both traditions, for although I was raised a Catholic, the more refined developments of modern Catholic scholarship, that clearly engrossed Bowden intellectually and spiritually, did not reach me. And I wonder to what extent they have reached contemporarily practising congregations.

Towards the end of the book Bowden lays out some challenges for today’s Catholic Church in Alice Springs. He records the many ways in which the parish has moved towards its Arrernte members – including most recently the installation of the stained glass window (design pictured, image courtesy the artist and OLSH) above the church altar designed by Kathleen Kemarre Wallace, which in its every detail is an expression of “Altyerre-Catholicism” as Bowden comes to term it.

He also argues for formal recognition of Arrernte ownership of the land on which the church buildings are sited – a dancing ground associated with their sacred site directly opposite, Atnelkentyarliweke (Anzac Hill, also called Untyeyetwelye). This could take a form similar to the handback lease arrangements in national parks, he suggests.

Michael Bowden ran out of time. The book could have benefited from more work on breaking down its denser sections for the general reader, on its structure, on fine editing. But any flaws are easy to forgive in the presence of its urgent striving for greater understanding brought to us by a dying man who rejoiced in the life he had lived and went, it seems, as energetically as he could and without self-pity or fear into his death.

Below: Michael with grandson Toby Mallard at Traeger Park in September 2017. Photo by Emma Murray. • Michael and Judy with their children, from left, Joel, Kane, Majella, Sean and Rhett.

All images, courtesy the Bowden family and publisher, are reproduced in the book, with the exception of the photo of MK Turner as a bridesmaid at Santa Teresa and the family photo at bottom. 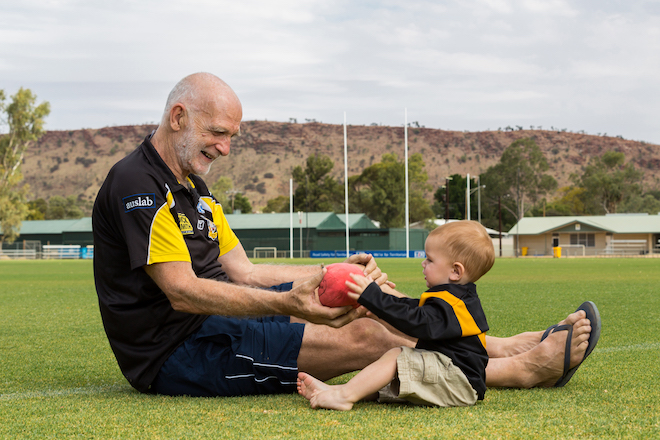 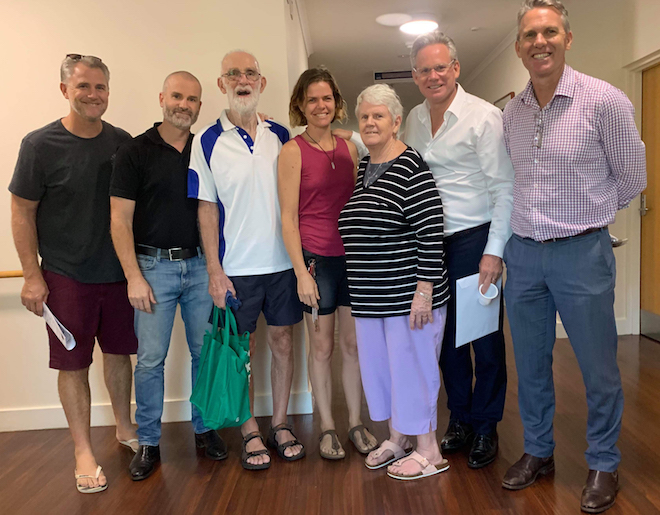