'Made in NT' Finke trucks head for China

Two NT entrepreneurs, one in Alice and one in Darwin, have spent six years building a business relationship around the Finke Desert Race with a giant off-road club in southern China.

There was a leap forward on the weekend: Baojun Yang (at left and in blue overall above), with navigator Ross Bohlin (above, centre), piloted a truck with a 6000cc Chev engine to 16th place outright and 6th in the class.

Mr Baojun, a wealthy member of the Wolf Pack based in Guangzhou, had never driven  the $350,000 machine in a race and had been behind the wheel only for about 10 kilometers. After the gruelling 440 km round trip he sure has a story to tell the 30,000 fellow members of his club.

At one point, as Mr Bohlin recalls it, the truck broadsided into a medium-sized tree – on his side – which cracked a stay in the chassis and crashed across the bonnet.

“What do we do now?” asked Mr Baojun 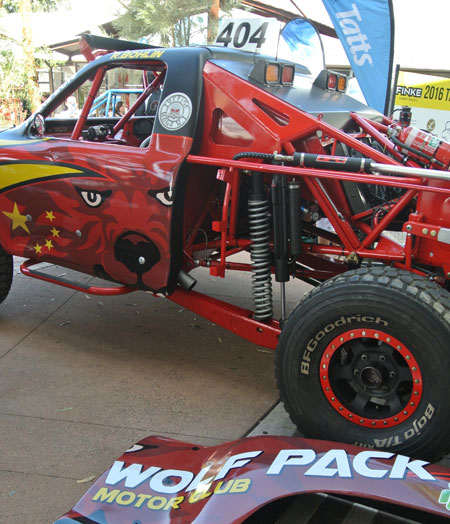 Right: The crack after the collision with the tree was in the horizontal tube above the rear left wheel and just behind the cabin. This photo was taken at the Tatts Finke media launch in the Mall last week.

Mr Bohlin built the car in Darwin and even before the good Finke performance he got enquiries for building two more, perhaps again starting with a Micklefab chassis, made in NSW.

“This is a potential export market,” he says. “Normally we see American trucks coming to Australia. I think the Australian trucks are just as good. The Chinese market is more aligned with Australia than with the US.”

He calls the recent Finke adventure “the impossible 40 day build” – “I hope we’ll have more time next time.”

Steve Strike, for many years an award winning photographer in Alice Springs, and who now lives part time in Guangzhou, expects there will be around nine new orders.

And some of the buyers are bound to have their eye on the Finke, to pit their skills against the best Aussie drivers.

The story started more than six years ago when Mr Strike received a chance invitation to visit the club.

It occupies the top two storeys of a 40-storey high-rise – it’s “like a palace”. Movies of club activities, shown in its own theatre, include drives across the Gobi Desert or on remote tracks in the southern jungles near the Vietnam border.

For events and gymkhanas closer to Guangzhou, the club builds temporary off road tracks on the nearby beaches, where they get up to “300 Hummers plus every 4WD you’ve ever seen, including old tricked-up vehicles”, says Mr Strike.

It was on. When he was shown club videos, Mr Strike couldn’t wait to return the favour with breathtaking Finke desert racing sequences sent by Finke president Antony Yoffa and vice-president Damien Ryan.

“The Wolf Pack had never seen anything like that,” says Mr Strike. “I asked them, do you want to come? They said yes and that was the seed.”

The female CEO of the club, Cherry Yang (second from left in the photo at top), came to look at the 2011 Finke and to make arrangements for a club member to compete in 2012.

Mr Strike took her on a 4WD trip through the West Macs. She drove down ‘the Widowmaker’ near Flynn’s Grave.

“She was scared,” recalls Mr Strike. They visited Palm Valley and other beauty spots. The second phase of the venture was born.

He now guides his Chinese guests in campervan road trips starting in Darwin 10 or 12 days before the Finke, taking them “wherever they want to go,” and after the Finke on to The Rock from where they fly to Sydney and back home.

In the 2012 Finke the first Wolf Pack team came and competed.  A vehicle was secured by Mr Strike in negotiations with Mr Bohlin. It was a great effort, with the Chinese finishing on the podium in their class at their first attempt.

However, in 2013 a new team entered which included a “Chinese national hero”, a professional driver. He bombed out when the vehicle broke down just 60 kilometers from Alice. Two film crews from the Chinese government TV network had little to show. 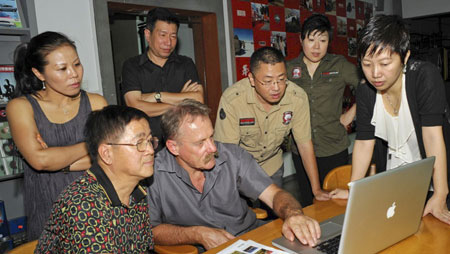 “There was bad blood,” says Mr Strike (at left, during a meeting in China). “It did not go down too well.”

As for Mr Bohlin, he became involved when Ms Yang, during her first trip in the company of Mr Strike, spotted Mr Bohlin’s truck in the Finke finish line-up.

She noticed the truck displaying a sponsor logo of Sinopec which is the petroleum arm of China Petroleum & Chemical Corporation. To this point Mr Bohlin had been dealing with the local distributors. Now he had a direct link to China.

In the years when no Wolf Pack driver was racing, representatives of the club still came to observe.

Says Mr Strike: “It’s not an easy road. You keep chipping away, chipping away. You’ve got to network, have contacts and links all over the place, you’ve got to have their trust, people really need to believe in you.”

That’s in China. The Territory, too, has its hurdles.

Mr Strike says: “In 2013 I got Tourism NT involved, but never again. They interfered with everything. They wanted to change my whole itinerary, they wanted to do it their way, the accredited way. I wanted to take the visitors to places that weren’t sanctioned by Tourism NT.

“I wanted to spend the first night at Mataranka Hot Springs. But that’s not a place accredited by the government. They said you’re not allowed to stay there. You have to stay in Katherine at this particular park.”

“They say safety is number one, cleanliness, there’s a whole range they tick off. I defied them, I took the visitors to Mataranka anyway.

“The other place I wanted to do was Devil’s Marbles, which is a must do – stay there for the night, watch the sunset and sunrise.

“Tourism NT said we can’t stay there either, because there was no mobile phone service, no running water, no flushing toilets. There is a security risk, if anyone gets bashed or murdered you can’t call the police for help.”

To Mr Strike and Mr Bohlin such obstacles – like the whoops in the Finke – are there to be taken with the pedal on the metal.

When Mr Strike  asked everyone about the highlight or most powerful experience for them during that 12-day trip, he got the most surprising comments: it was unanimous, Devils Marbles by a large margin followed by the midnight swim in Mataranka Hot Springs.

Great things are ahead: The Wolf Pack is working on their own Baja style race, a 3000 km track starting under the Great Gate of the Great Wall of China.

With luck, a few “Made in the Northern Territory” trucks will be on that starting line.