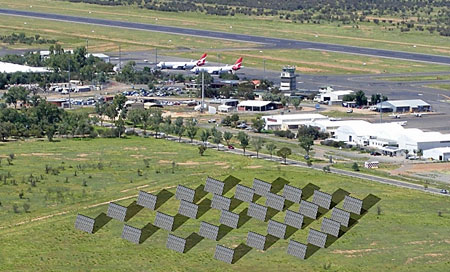 Chief Minister Adam Giles says electricity prices would rise 300% if all power for Alice Springs were to be generated by solar systems, which would cost $1.4b.

But he also says the $2000 vouchers under the new Home Improvement Scheme could be used for solar installations, and a massive savings in emissions could be be achieved by shutting down coal fired power stations: “If Labor and the Greens were so keen on protecting the environment, and reducing emissions, they would close every coal fired power station in Australia and use Northern Territory gas. You’d cut Australia’s emissions by 50% over night.”

Mr Giles was responding to questions from the Alice Springs News Online about the push by the environmental organisation RePower Alice Springs to reduce the 10 gas fired generators to be installed in a new power station to eight or six, and spend part the $75m on developing more solar energy.

We asked Mr Giles what cancellation provisions were included in Territory Generation’s contract with the suppliers of the 10 piston engines.

We also put that question to NT Treasurer Dave Tollner, the sole shareholder in the company, but have received no reply.

Territory Generation declined to provide answers because they are “commercial in confidence” – notwithstanding that the money being spent comes from the public purse and the tender is no longer open.

Mr Giles said in Alice Springs on Friday: “Territory Generation is an independent statutory body, a government body, a business entity on its own. Those questions could be answered in Estimates.

“What I will say though is that 23% of Alice Springs power comes from solar generation.

“There is a general rule that says, once you get to 20% you start to have load issues which is why you see blackouts in Alice Springs.

“On a cloudy day such as today you need to get the generators up and running on a speedy basis or you start to see challenges with the load.

“That’s why in the Budget we’ve identified $8.7m to put in place a new computerised network system that helps balance much of the load, so we can keep the solar going and we don’t have to burn as much diesel in particular, but also gas, so we have less emissions and more efficient pricing structures with the way the power is generated.

“I know there are some people saying, let’s go out there and turn the whole of Alice Springs onto solar and batteries.

“This will cost $1.4b to build the solar and the battery technology. It will see a multiplier of electricity prices going up by 300%. At the same time we still have to run the gas fired power units to make sure that we have speedy reserves and back-up capacity.

“The $1.4b will give you a five day back-up storage capability,” said Mr Giles.

“It all sounds very good until Territorians and Central Australians are paying 300% [more] for their electricity. We need to be fair and reasonable in how we get the balance right. 23% is good.

“We’ve just put out a $2000 incentive voucher for tradies and toolies to do renovation works. It’s a good incentive for people to go out there and use that for solar upgrades on their house, supporting our environment.”

Territory homeowner-occupiers can apply for a voucher worth up to $2,000 towards minor improvements, repairs and upgrades to their homes, says the NT Government website.

They can use the voucher for works of up to $20,000 carried out by a Territory small business which is registered with the scheme.

It is only available to Territory homeowner-occupiers and they will need to contribute at least half of the cost of works. Up to 30% of the voucher value can be used towards goods and materials as part of the job.

PHOTO and artist’s impression: Part of the solar plant of the Alice Springs Airport which now generates 50% of its energy needs from the sun.