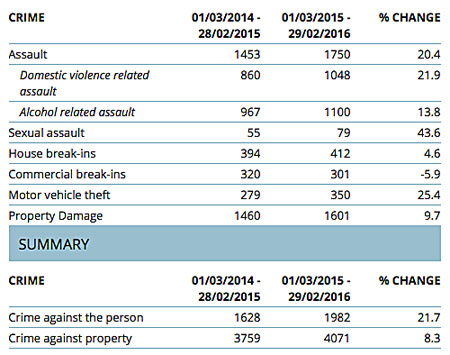 Crime in Alice Springs has increased massively in the year ending February 2016, with sexual assault up 44% compared to the preceding year.

This is based on high figures – an increase from 55 to 79 sexual assaults – which makes a big statistical error unlikely.

The crime statistics are prepared by the Department of the Attorney-General and Justice using data recorded by the Northern Territory Police.

Only commercial break-ins are down, 6%, possibly because many businesses have closed their doors.

Crime against the person rose 22% and against property, 8%.

The offence data were extracted from the NT Police PROMIS system on April one and released this week.

UPDATE May 16: Statement from the NT Government.

A government spokesman provided this statement today: “The figures spiked considerably late in 2015 and have been trending down since.  Any level of offending is too high, but police are encouraged by victims reporting all forms of assaults, be they domestic, family or sexual assaults in the comfort that they will be supported when they do speak out.

“The long-term trend in Alice Springs has been and continues to be very positive from a community safety perspective.
“The March statistics are due to be released on Friday and they’re expected to show that crime in Alice Springs is lower across most data categories than it was in August 2012 when the Country Liberals came into Government.
“Police advise that property crime continues to be largely opportunistic in nature, with premises left insecure with unlocked doors and windows.

“The theft of alcohol by adults is a trend identified given the restrictions in place with point-of-sale intervention and police are working with licensing authorities and commercial premises owners to address this trend.”