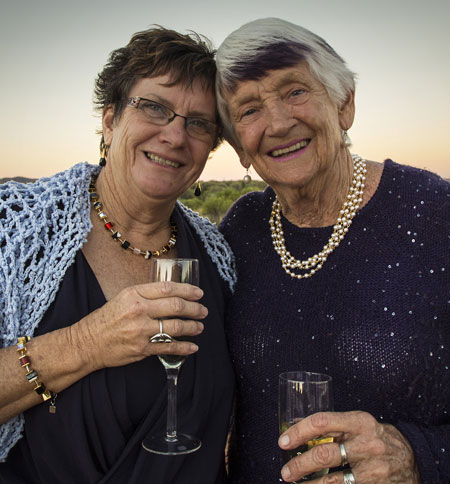 Two hundred people who’ve lived in The Alice for at least 25 years sat down together for dinner last night.

The Territorian Dinner, the hugely popular annual event and a major service project of the Rotary Club of Stuart, was a milestone for the place where it was served: the ambitiously named Earth Sanctuary World Nature Centre.

Sixteen years ago brothers Tom, Dan and Ben Falzon arrived in The Alice to do something big for the planet.

They had a prominent show biz career in Europe and Australia (Neighbours) behind them.

Now they wanted to translate the theory of climate change into action.

Their father, Joey, joined them.

They took up 50 hectares of bush on airport land and, by the sweat of their brows, carved out a complex where visitors can see, touch and marvel at a range of renewable energy equipment, learn about its use, look at the stars, and have a meal.

Joey lives in a geodesic dome they built. A second one, its coloured lights shining though the skin, is used as a classroom.

There are two bars built from bush timber alongside the outdoor dining area, partly under a roof, partly under The Centre’s legendary star sky.

For much of the time the brothers worked as paramedics for the St John Ambulance to raise the cash for their dream.

And like all they touch it turned to gold: Their often dangerous, sometimes distressing work in the streets of Alice Springs was turned into a documentary for the Nine Network.

It has already had an audience of more than a million, says Dan. The network has a contract for five more screenings.

He says the documentary made sure that not only the town’s troubles were shown, but also the region’s beauty, giving it the “respect it deserves”.

And of course it gave the sanctuary a powerful plug: It now has regular visits of around 60 people from big tour companies such as Expanding Horizon and AAT Kings.

Territorian Dinners have been every year for more than half a century. Rotary Stuart took over about 10 years ago, and last night’s was arranged by co-president Denise Brooks.

Dan says it was not only one of their most ambitious functions, in terms of size, but a big honour for them, to have as their guest people who have so resolutely made The Alice their home.

And so another dynasty of high achievers is taking root in Alice Springs.

School children learning about the environment at the Earth Sanctuary.