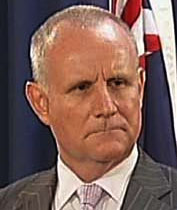 A Bill authorizing the use of restraints on juvenile offenders in detention has been introduced by Minister for Correctional Services John Elferink in the NT Parliament.

The Youth Justice Amendment Bill 2016 clarifies the devices approved for use by the Commissioner of Correctional Services to restrict the movement of a juvenile offender.

The use of hoods and tear gas to restrain detainees at the Don Dale Youth Detention Centre was widely reported and commented upon last year.

According to Mr Elferink, the Bill comes in the wake of incidents including assaults on detention centre staff by juvenile offenders wanting to “breach the perimeter of the detention centre”.

The Bill intends to legislatively empower the Superintendent to authorise staff to use approved restraints to restrict the juvenile offenders’ arms, legs and body, “when necessary to engage the offender or assist the offender in safely de-escalating the behaviour”. It will also assist in reducing the risk of escape from youth detention centres.

“This is about clarifying the processes, procedures and instruments used to ensure a safer working environment and provide options to prevent individuals from harming themselves and others,” says Mr Elferink

“The legislation is intended to clear up any ambiguity with a view to protecting staff in their workplace.”

Following passage of the legislation staff will receive further training in the safe application, removal and supervision of approved restraint devices. The Department of Correctional Services will also establish an advisory group to oversee restraint practices in youth detention.