Stance of the patriarchs and matriarchs 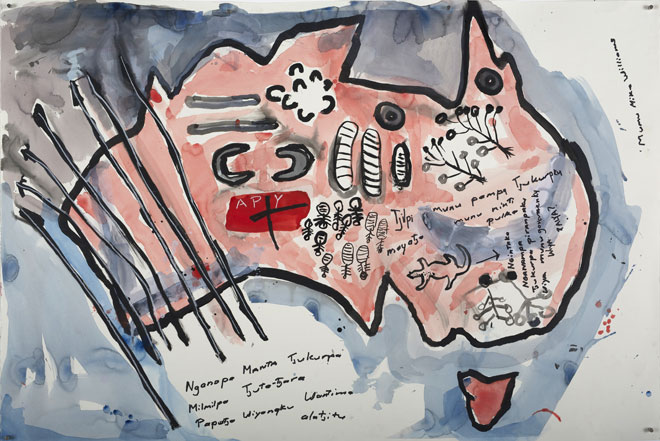 Mumu Mike Williams asked for a sheet of paper and a spear.

“The spear is our culture … we live by the spear,” Robert Fielding translated from Williams’ Pitjantjatjara.

Williams looked at the paper, and thinking of his largely non-Aboriginal audience, mixed in some English: “Paper … no tjukurpa, no anything … we got spear … we are teaching our young people … to look after law and culture.” 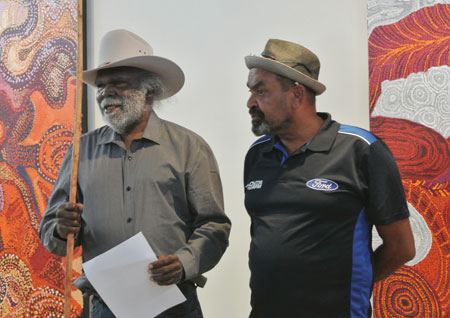 The message was clear, yet Williams has used paper – with ink, acrylics, pastel chalk, even tea – to create a gripping series of protest paintings, with an even more pointed message.

At first glance, I took them to be statements about prior occupation: that the Australian continent was and is imbued with Aboriginal law and culture. But there’s more to it.

A spreading dark stain in the centre of the country (below left)) is the radioactive cloud that spread across the APY lands following the atomic bomb test on – Williams is precise about the date – 15 October 1953.

“In the time of our ancestors everything was good,” he writes in Pitjantjatjara. “Until whitefellas put that poison on the land. That killed a lot of Anangu and damaged our land and culture. This happened first at Emu and then at Maralinga. This started at Emu on 15/10/1953.”

In his submission to the South Australian Government’s Nuclear Fuel Cycle Royal Commission Williams is unsparing about the traumatic memories his people have of that time. 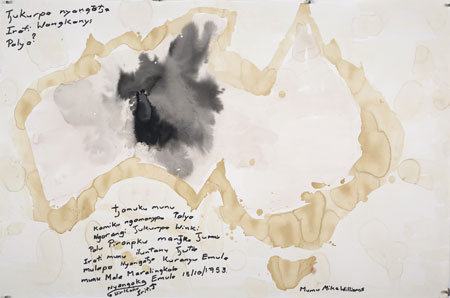 “At Maralinga when that bomb exploded, it came all the way here … Katheleen Tjapalyi was a little girl and saw that cloud coming through to Mimili. Kathleen’s mother and sister saw it too, they went and lay down, but didn’t wake up, ever …

“In Pukatja [Ernabella] in the mission days, when I was a tjitji, I saw a lot of Anangu tjuta dead in front of the clinic from that poison (uranium). Ron Turinger, the pastor of the church, was carrying all the Anangu bodies in a wheelbarrow to one piti, one big hole. They were carrying them like a dog to that hole.”

Little wonder that Williams has strong feelings about South Australia possibly expanding its involvement in the nuclear fuel cycle: “At Maralinga Tjarutja, they already ruined the land …

“If you gave us millions of dollars for that uranium and you mined that uranium on our land, that poison will kill all Anangu and then the money will be left floating behind anyway.

“You can keep your money and stay away from our land!”

In the paintings, the spears help make this fierce declaration and protest: “Our land and Tjukurpa are sacred. Don’t touch them!” 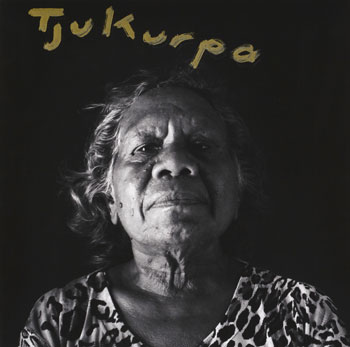 Williams’s paintings are part of an exhibition from Mimili Maku Arts showing at RAFT artspace in Alice Springs. Their title, Tjilpi Munu Pampaku Tjukurpa Kunpu Kanyintjaku, is also the show title. It means: “It’s the old men and women who really protect culture.”

At the show’s opening Fielding’s deep satisfaction to be part of this group was palpable. He is a younger man (born 1969), making his mark particularly in photography, last year winning the Telstra NATSIAA Work on Paper award for You See Black, I See Red. In this show he contributes fine black and white photographic portraits of each of the other artists.

“It is an honour to be showcasing with the patriarchs and matriarchs of our culture,” he said, “as they are the ones that hold the stories within.”

He went on to evoke the qualities of each, as expressed in their work and allocating to each a word from the show title.

He hailed the “great statements” made by ‘Tjilpi’ Mike Williams.

The “bold lines and colours” of ‘Munu’ Tuppy Goodwin. 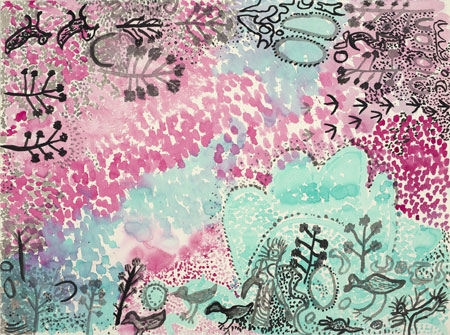 The “pastel shades of pinks, blues, giving her stories a wash away effect” of ‘Pampaku’ Kathleen Tjapalyi (left).

The “great storyteller, dancer and painter” that is ‘Tjukurpa’ Ngupulya Margaret Pumani.

‘Kunpu’ Punu Yanima who brings the canvas “alive with a heart beat”, holding the viewer “spellbound”.

Fielding then added a last word, from the title of his portrait series, “mulapa”, meaning “true”: ‘Mulapa’ Willy Martin.

“Mulapa. These are true stories that each and every one is telling on canvas, paper and photography.

“And to be part of capturing each and every artist’s image is a blessing. Also to me, that I am who I am because I have learnt from them the importance of culture and that culture will never die with the likes of strong art centres and artists working alongside one another.”

Shows at RAFT till May 7.