Unfinished business for the cattle industry 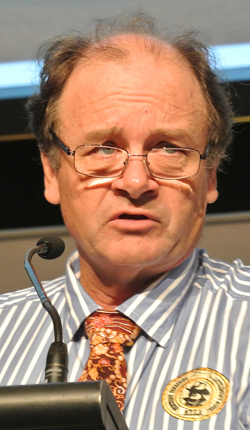 While the Giles Government last year ushered in a “new era of access agreements to pastoral leases” for oil and gas explorers, there is still lots of unfinished business about regulating that industry’s safety standards and mess left behind, with rehabilitation of “legacy mines” estimated to cost up to a billion dollars.

Tom Stockwell (left), the new president of the NT Cattlemen’s Association (NTCA) was addressing its 32nd annual conference, which opened in Alice Springs this morning.

He also spoke about the aftermath of the live export ban, red tape with the valuation process of cattle land and young Aboriginal men returning to stations in big numbers as ringers.

Mr Stockwell acknowledged the arrangements for miners getting access to pastoral land: The Giles Government “finally made that happen” and he called it a leap forward for pastoralists and [oil and gas] explorers.

Access agreements with pastoralists are now mandatory, and regionally royalty systems are being established.

“There has never been a more important analysis that the industry has undertaken,” he said, for the benefit of “the cattle industry, the country and our kids” – and it’s a pity that relationship hadn’t been established by earlier administrations.

But there is a long way to go with controls and regulations for when the gas and the oil begin to flow.

Says Mr Stockwell, from Sunday Creek which is “part of the 10% remaining available for exploration”: “We are calling for a system of adequate bonds in perpetuity to fully secure rehabilitation expenses and the rectification of negative impacts of any petroleum activity.”

He says there needs to be baseline monitoring data and maximum safeguards of water integrity both below and above ground, through appropriate regulation and legislation.

“The Territory Government and the oil and gas industry need to prove to us in practical terms how safety of water, in particular, will be assured.

“And if something does go wrong, how is it detected and rectified in a timely manner?

“World’s best practice and guiding principles are not explanations,” he says.

“How many inches of hardened steel, how far is the casing going past the aquifer … monitoring systems that we can see and touch and understand would be much better.

“Is fracking under the aquifer like an explosion you see in the iron ore mines or is it like someone driving in pickets on the other side of the MacDonnell Ranges?

“There are plenty of answers that need to be communicated, there are still a lot of people who don’t know.

“There are too many issues already in the Territory of legacy mines.”

However, he says there is no point in adopting a policy of “zero tolerance for risk or a barrage of yellow triangular signs with imaginative three word slogans.

“We would be no better off than those NIMBY mobs who react to a Four Corners show.”

Mr Stockwell says the live export trade suspension in 2011 and the subsequent disruption created an unforeseen burden to an industry well adjusted to the many other challenges, such as volatility in prices, seasons and staffing to “keeping the balance of our business”.

But the ban threw “cattle, country and kids wildly out of balance.”

Herd dynamics and pasture conditions are still “all over the place and it will take another decade at least until we get back to some sort of normality.”

A class action against the Commonwealth, with the Brett Cattle Company as the lead plaintiff, is not nearing its end.

Said Mr Stockwell: “The class action must be prosecuted to reflect a suitable dollar figure that describes the chaos, on and off property, and ensures no government ever does that to us again.”

Meanwhile he told the crowd of about 500 people from stations throughout the NT that the valuation process of unimproved carrying capacity “remains an open wound”. He’s not convinced that the consultation process is working.

“An inordinate amount of time and money is spent to allocate rentals and rates. It would be simpler to remove the pastoral leases from the community local government system.”

He said there were predictions 10 years ago that by 2015 oil would be in severe shortage, prices would be through the roof and we urgently need to plan to have natural gas as transport fuel.

“In reality today our power here is from fracked gas, and the reduction of diesel prices is largely due to the expansion of the shale oil industry in the US.”

He says miners are likely to “supply infrastructure for the pastoral industry that governments are failing to fund”.

Mr Stockwell referred to Noel Pearson encouraging “whitefeller cattlemen to be less shy about their connection to country and their love and understanding of their land, their custodianship of it, and their ability to make better decisions about its management than interest groups and governments in southern capitals [who would be] aiming at placating urban groups.” 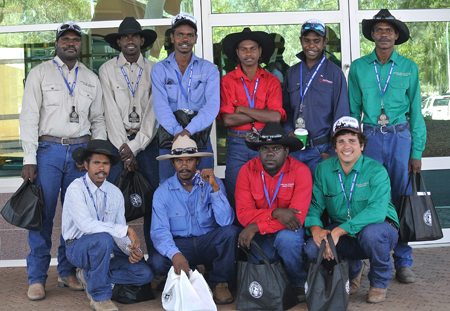 Mr Stockwell spoke about the equal wages case for Aboriginal workers on cattle stations, 50 years ago now, leading to the “relocation of fit, healthy, proud communities [to places] which can suck the happiness out of many people”.

Right: Stockworkers at the conference today, hailing from Katherine, Borroloola, the VRD and Queensland Gulf country.

But he said there are now again “happy proud faces like these” –  showing a slide of three young stockmen.

“They are still around and want to be back on the stations.”

The Cattlemen’s Association “has now trained and found jobs for 300 Aboriginal station hands.”

The NTCA is publicly supported the leasing of the Darwin Port because it “will need to grow and become more efficient as we grow and continue to contribute to northern economies.

“Private southern investment in the north, especially agriculture, appears to be resolutely timid.”

He quoted the ABC Landline program as reporting that less than point three of one per cent “of the trillions of dollars in superannuation are invested in agriculture”.