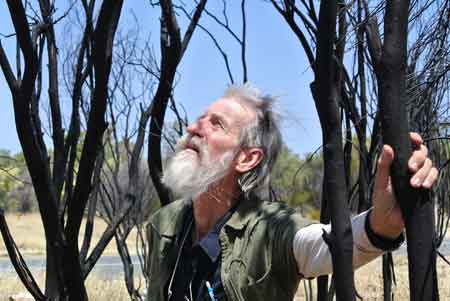 Long before the term ‘landcare’ was coined in the 1990s, Peter Latz (right) had dedicated himself to doing just that. Now his lifelong efforts have been recognised, with top honours in the NT Landcare Awards as Australian Government Individual Landcarer.

Well-known throughout Central Australia and beyond as an eminent botanist, author and landcarer, Latz’s love of plants developed as a child growing up in Hermannsburg / Ntaria and speaking Western Arrernte. He earned a Bachelor’s degree in Zoology and Botany from the University of Adelaide and later a Master’s degree from the University of New Engladn for his work on the Aboriginal use of plants. Over four decades he worked for NT Parks and Wildlife and has authored four books and dozens of reports and papers on the botany, ecology, ethnobotany, fire regimes and cultural history of desert Australia. His book Bushfires and Bushtucker is a classic Australian text that will be in demand for generations.

The depth and breadth of his observations over time are unparalleled. He has played, worked and travelled across Australia’s major desert bioregions for seventy-odd years. His radical propositions about the functioning of arid ecosystems have revolutionised approaches to fire management in our deserts. He is said to be the first person to identify the environmental risks of buffel grass now recognised to have major ecological impacts.

Latz’s individual landcare work grew alongside his professional activities and has intensified since his retirement. Today he continues the practical labour of real landcare. He is passionate about conservation and people’s role within it.

Left: Latz on his buffel-free block, flourishing with native grasses and plants. Photo by MIKE GILLAM.

He speaks, mentors and shares his expertise with diverse younger generations. These include Landcare groups, field naturalists, pastoralists, Aboriginal ranger groups, ABC audiences and others. He advises traditional owners, Territory government and NGO staff on the ecosystem management of national assets such as Central Australian National Parks, Indigenous Protected Areas and Newhaven Wildlife Sanctuary. He labours alongside staff to do scientific surveys, manage fire, control weeds and revegetate land.

FURTHER READING: For Peter Latz on his adventures in the bush with traditional owners, go to Searching for Kurpulunu. At the bottom of the story you’ll find the links to previous episodes. 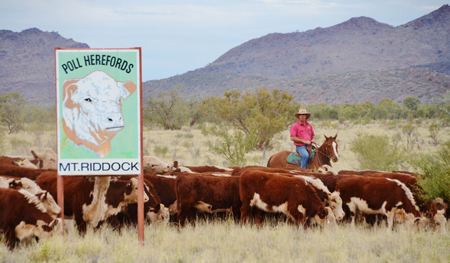 Other Central Australian winners in the NT Landcare Awards are Steve and Rebecca Cadzow, Mt Riddock Station, recognised for ‘Innovation in Sustainable Farm Practices’. The pastroalists are committed to growing quality chemical-free, environmentally sustainable beef on their family owned NT property, Mt Riddock Station. For them, taking care of the land means taking care of every aspect of the landscape as a whole for future generations. They are achieving this through a continuous adaptive management approach that has seen them lead the way in adopting innovative practices in their region. The Cadzows were among the first to adopt rotational grazing in the arid zone and have worked closely with researchers to test its potential in this landscape context.

Best Urban Group went to Jen Kreusser for Land for Wildlife – Garden for Wildlife Alice Springs, partner programs providing land holders with recognition, access to advice from environmental scientists, and connections to a like-minded community with decades of experience in wildlife habitat protection and restoration in Central Australia. The programs support landholders and residents to create biodiverse habitats on their private properties, and to develop corridors and patches of viable wildlife habitat in built-up areas. 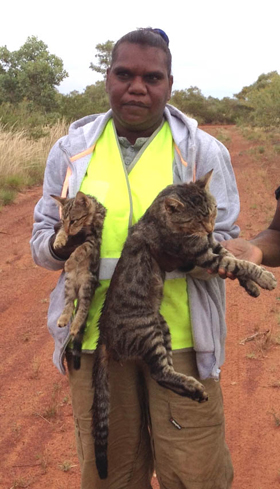 Christine Ellis (right) of the Central Land Council Nyirripi Ranger Group was honoured as ‘Indigenous Champion’, for her outstanding contribution to threatened species recovery and feral cat control in the Tanami Desert. With strong family support she manages to juggle raising four young children with full time employment and is an excellent role model for other young women. Currently employed as a Central Land Council ranger, over the past 12 months she has also regularly worked as an independent feral animal control contractor on a private wildlife sanctuary.

‘Agricultural Champion’ went to Tony Freshwater of the Indigenous Pastoral Program, which began in 2003 as a strategic collaboration between Traditional Owners, pastoralists and government agencies. The program works together for sustainable natural resource management and profitable Aboriginal pastoral business outcomes across 34 000 square kilometres of Indigenous held land. Managing 81,000 head of cattle, the program currently engages with 15 individual properties and their land holders. Through implementing practices to improve natural resource management and productivity outcomes and increasing Indigenous employment skills and knowledge, the program has and will continue to benefit Traditional Owners and their land.