Praise for $24m overpass over the top 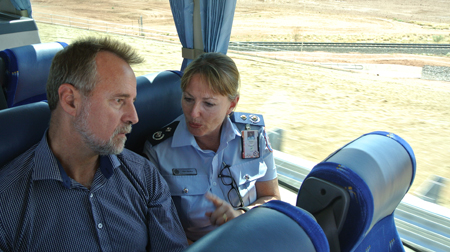 The spin doctors would have been working hard on this one: The rail overpass 12 km south of town is making history – no less – because it’s doing away with the last level crossing on a national highway in the NT.

I know a man who lives in town, has worked 30 years at Pine Gap and hasn’t ever seen a train there, let alone been run over by one.

Chief Minister Adam Giles, noted for his optimistic estimates, claimed “about 2000 vehicles a day” pass over the crossing.

Senator Nigel Scullion, as the only Federal Minister from the NT, got the job of opening the overpass today. He, too, was working hard to find justification for the $24m hump: “Good infrastructure is when you’re ahead of the load.”

It will be handy “when this road is going to be as busy as it is going to be. You need to be ahead of the curve,” he stated emphatically.

The ABC asked: Should the money have been spent on reinstating concession fares on the Ghan?

The Senator wasn’t up to speed on the matter but expressed readiness to meet with people pushing that barrow.

We asked him if the money would not have been better spent upgrading facilities in the West MacDonnell National Park, given that it is Aboriginal land, that he is the Indigenous Affairs Minister, and given that the whole community would massively benefit from that. 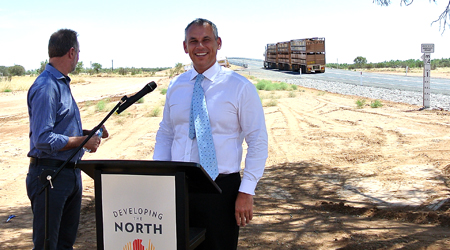 The money “comes from an infrastructure portfolio. This has been an excellent investment, as all Territorians would say,” claimed the Senator, and quickly strayed from the point.

“I’ve just invested over a billion dollars, not only in infrastructure but also in social services across Indigenous land.”

We asked Mr Giles, who was standing next to Senator Scullion and had heard the conversation, if the $24m for the overpass was money well spent: “Absolutely,” he replied.

PHOTO: Senator Scullion talking to Clare Barker from the Emergency Services on the bus passing over the overpass to mark its opening today. The railway line can be seen below in the distance, with no train on it, as it is almost always. ABOVE: Senator Scullion and Mr Giles with a cattle road train approaching the overpass.