Taking pop up to the next level 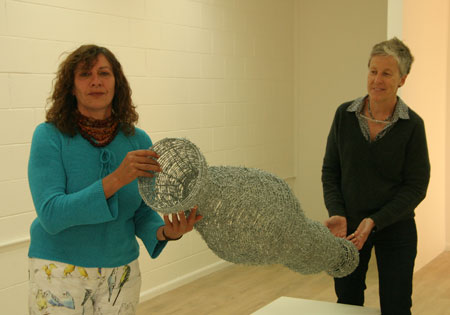 With art collectors and gallerists flying into town for Desert Mob – the annual exhibition of work from desert art centres – it’s a good time to test the waters for showing and selling work by independent artists.

That’s the idea behind a pop up gallery in Todd Mall, one of now five pop ups planned for the coming weeks.

Studio Five, showing work by 10 artists, is set to open at 3pm, 3 September for a month. The driver of the project is Liesl Rockchild, founding manager of Tangentyere Artists, now working independently as an art consultant.

Her pop up is in the former lingerie boutique, between the souvenir shop and Feelin’ Peckish cafe. It already had the advantage of being small, but not too small, of having clean lines and a timber floor. With a lick of paint, inside and out, sponsored by NT Link’s Libby Prell, it’s looking like the real thing.

The gallery will go hand in hand with a website which can, of course, outlive the physical presence of the pop up. Rockchild has also secured philanthropic help for this and her whole marketing plan, taking pop up to the next level.

Right: Orange is the signature colour for Studio Five.

The project has involved significant investment, especially in terms of her time, but the support that she’s been shown by everyone from the landlord and real estate agents to the Town Council and her private backers, encourages optimism.

“There are artists practising here with significant reputations,” she says, “who exhibit and sell interstate, who’ve won awards, and yet who don’t have regular regional representation. I think they deserve it.”

Best known as a writer, Cobby-Eckermann’s literary career had its beginnings here but has taken off since she returned to the country of her childhood, in the mid-north of SA: “I knew who I was when I returned,” she says.

Recently she has revived an earlier visual arts practice, taking her inspiration from the kind of materials found around the farm of her adoptive family, the Eckermanns, and the traditional Aboriginal woven fish trap. She finds sitting in the sun and weaving, even with barbed wire, deeply meditative, “like dot painting”: “It’s a good complement for the writing, especially when I’m editing – the right word will come floating up.”

Showing one of her fish traps at Our Mob, the SA equivalent of Desert Mob, resulted in a number of commissions. Cobby-Eckermann now sees the possibility of her art supporting her writing. 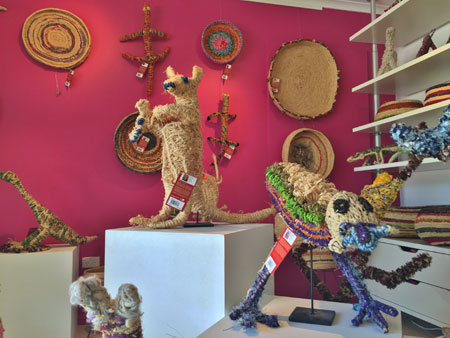 The Studio Five pop up will put out a feeler – is there a local appetite for this work that could sustain an art business on an ongoing basis? If it seems so, Rockchild might repeat the experience in a year’s time or take it interstate, or even think about prolonging the local physical presence. The beauty of pop up: scary but not too scary.

Meanwhile, yet another pop up for the mall has come out of the woodwork! Tjanpi Desert Weavers are bringing their colourful wares (left) into a shop in Cummings Plaza, between the old Don Thomas Saddlery (site of the ‘Full Stop. Pop Shop’) and Confucius Palace Dumplings.

This exercise too will piggy back off Desert Mob, which runs from 3 to 5 September. Tjanpi will open their pop up on Monday 31 August and run through to the following Monday, 10am-4pm. They will be selling baskets, sculptures and painted seed jewellery, hand made by over 400 female fibre artists from the 26 communities of the NPY lands.

On display also will be one of their impressive installations, Minyma Kutjarra, made by a collective of Tjanpi artists from Docker River.