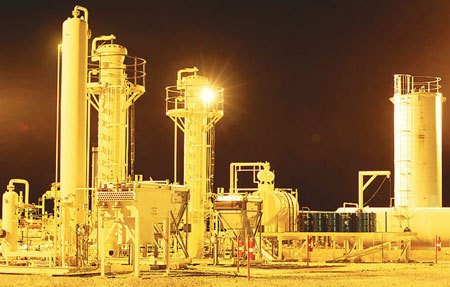 Is the fracking cat out of the bag? Yes, but it could be put back in, without exposing the NT Government to litigation.

The cancellation of oil or gas permits to explore and produce is not likely to happen under the present government, unless the producers blatantly disobey the regulations which are among the world’s strictest, says Ron Kelly, the Chief Executive of the NT Department of Mines and Energy.

In the event of breaches of conditions they stand to be shut down immediately.

In the NT the companies include Origin, Santos and Pangaea in the Beetaloo Basin (around 500km southeast of Darwin) and Daly Waters, and Central Petroleum in the Mereenie basin (pictured) near Alice Springs.

Currently granted exploration permits are covering about a quarter of the NT, and they run for five years from date of grant.

After that the companies must relinquish part of the permits and if all conditions of the permit have not been met Minister may not renew the licence.

Mr Kelly says the Minister is empowered to refuse the renewal of a licence, without risk of litigation, even if all conditions of the permit have been met.

“Sovereign risk” can also play a role, defined as “the probability that the government of a country (or an agency backed by the government) will refuse to comply with the terms of a loan agreement during economically difficult or politically volatile times”.

Mr Kelly says to decline an extension for reasons other than a very serious breach of regulations would be a pretty bad look, likely to discourage companies from dealing with the Territory.

It would also deprive the NT of significant royalty income: 10% of the wellhead market value, irrespective of how much the companies are spending on production, transport and marketing.  He said it should also be recognised that onshore gas from the Mereenie field has powered the Territory’s major centres for decades without incident.

Royalties for oil and gas produced offshore go to Canberra, on-shore ones go to Darwin.

Mr Kelly says some people in the fracking debate misinterpret the recommendation, in the Hydraulic Fracturing Inquiry by Allan Hawke, that the controversial process should be subject adequate regulations.

“People read this as meaning we don’t have these regulations. We do,” says Mr Kelly.

“Dr Hawke said a fracking moratorium is not required.”

While regulations in place in the NT are “world standard” they are being improved even further, he says.

Government is preparing new legislation to take Dr Hawke’s recommendations into account and the companies continue to develop methods for complying with government requirements put in place from time to time.

Mr Kelly says with shale oil the exploration wells must have the same standards as the production wells, featuring three steel casings with the spaces in between filled with concrete to avoid contamination of the water table through which the wells are being drilled.

Mr Kelly says some 62% of the NT had been under oil and gas applications, but the 2014 amendment to the Petroleum Act is aiming at restricting acreage to locations preferred by the government.

Some applications don’t proceed past native title, sacred sites and traditional owner approvals, and the government can refuse to grant permits, he says.

“While we have exclusion zones, with the changes to the Act government now controls what land is released for oil and gas exploration and when it is released avoiding areas around some of the major population centres and other sensitive areas.”

Mr Kelly says his department is not handling the proposed gas pipeline – as a “major project” it is a responsibility of the Chief Minister’s Department, which is expected to make an announcement later this year.

The Alice Springs News Online understands that this morning the company Murphy Pipe and Civil made a presentation to Town Council members about a pipeline linking the Mereenie fields with Moomba via Alice Springs.

We understand the deadline for submissions to construct a pipeline is next month, with a successful applicant to be announced in October.

Meanwhile a Katherine reader, Bruce Francois, has forwarded to us an email from Opposition Leader Michael Gunner in which he says about fracking: “The Party at its most recent conference adopted a moratorium position pending independent scientific investigation. This is our position.”