Home Issue 10 Temporary Beat Locations – are they on or not?
Issue 10Issue 11Issue 12Volume 22

Temporary Beat Locations – are they on or not? 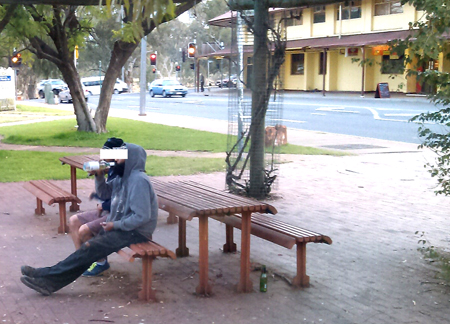 In the past week police have been conspicuously absent on most days hot spot bottle shops in Alice Springs such as the Todd Tavern, the Gapview Hotel and the Eastside and Northside IGAs.

The adverse effects are immediate and distressing for the whole community. What is going on?

Last Thursday for example, PAAC members noticed people drunk, arguing and fighting around the Todd river bed in the presence of children, and others sitting outside the Eastside IGA drinking from bottles of wine.

Police were contacted about the former incident but rang back to say no-one was available to attend. Dr. Boffa says it’s not good enough by a long shot.

TBLs prevent a lot of harm including assaults and child abuse by deterring people from purchasing take-away liquor.

This has been widely accepted, including by the current CLP Government, which introduced and supports TBLs in their current form.

When they are not in place and there are violent offences including sexual assaults, we need to ask if these incidents were preventable.

NT Police said months ago that by the end of April there would be coverage of all Alice Springs take-away outlets during opening hours. Additional staffing will always be needed for major events like the Finke race and the Show. It’s not an excuse. TBLs were effectively supposed to become PBLs – Permanent Beat Locations.

This has not occurred and the families and communities of problem drinkers will bear the brunt of drinkers’ access to grog due to the sporadic TBL presence.

Police and Licensing data shows greatly reduced liquor sales and rates of offending, including assaults, since TBLs were increased at the direction of the current NT Government.

They are the most effective strategy we have at the moment to reduce alcohol supply.

Is there simply a problem with police rostering? Is there a lack of commitment or is there not the money to pay for them?

The Attorney-General and Minister for Justice and for Health John Elferink, Police Minister Peter Chandler and the Police Commissioner need to sort this out at once and ensure that there are sufficient police officers to cover all take-away outlets during all opening hours in Alice Springs, Katherine and Tennant Creek.

Get TBLS working consistently or investigate alternatives such as the abandoned ID scanning system.

PHOTO: Drinking wine in the park across the road from Todd Tavern last week.

By KIERAN FINNANE The reinvention of the Alice Plaza – and its owners' attempts to involve the Town Council in their plans – prompted the...
Read more
Issue 10