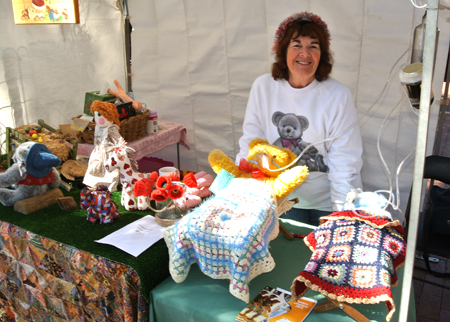 Maureen York, who’s had a stall at just about every Todd Mall Market since its inception in the late ’80s, is a one woman disaster relief organisation.

Her story puts into perspective this great Alice Springs institution – so much more than a place where you merely go to buy something.

It’s where Maureen gets to hear about disasters that befall people, and where she raises money for them in her Teddy Bear’s Hospital, producing or “curing” hand-made Teddies or dolls – for a donation.

The proceeds go to people who get overlooked by the established charities: “It’s things that other people won’t pay for,” she says.

Maureen has a scrap book of people she helped: “This girl lost everything in a fire. So I paid the body corporate fee for her unit for the next quarter.”

Maureen and the Cancer Council paid for a young man, a leg amputee, to visit his mother who was dying from cancer in Alice Springs.

Another photo: “This young girl had cancer. We raised money for her. She got better and here she is, helping me with the Teddy Bears Picnic, to send these three kids (she points them out in a photo) up to Dreamworld. Their mother had died of cancer.”

Another photo: “Somebody stole his car. He had cancer. He lived in that car. He got it back but the windscreen was smashed. I paid to put in a new one.

“This little baby was hurt in a fire down at Kulgera. The mother got its brother out and the father smashed the window and got the baby out. But the baby died on the way to Alice Springs. They had lost everything. I was able to give them $200 or so, and then money to buy clothes for him to get buried.”

Maureen teamed up with Fish’s Run to buy a computer for Isaac Elliott to start a new life after being paralysed in a motorbike crash. “And now he’s down in Melbourne, making movies.”

A photo of an African girl: “She went to Queensland and had her legs repaired, and she’s walking now. The Teddy Bear’s Hospital helped raising funds for her in Alice.”

Another photo: “This girl died at 31. So I raised money for her as well.”

A newspaper advertisement placed by the Department of Health, announcing it would arrange the burial of five babies whose bodies had been left behind in the hospital morgue.

Says Maureen: “I went down to Mad Harry’s and got five little Teddy Bears and took them down to the funeral parlour. I had them put in the coffins with the babies so they didn’t have to go on their own, so they’d have someone in the coffin with them.

“I went to the funerals. The people who were there were ministers from different churches and one couple.

“There were five babies at that time but I read recently that there were 17 at another time.

After nursing in NSW Maureen came to Alice in the 1960s, on her way to Broome, but never made it there.

In Sydney the rules had been to be in the nurses accommodation by 10pm. The rules were similar in Alice but they were blissfully ignored: “We had great parties in the nurses quarters.”

The seven men to one woman population ratio at the time was a big attraction for Maureen, as were the fascinating medical challenges, including dealing with Aboriginal people who had been sung: “You never come across that down south.”

As a stalwart of the Market Maureen founded the Teddy Bears’ Hospital as “everybody started to bring me Teddies. So I turned my stall into a hospital for Teddies.”

The development of the Market into a must-do for thousands of locals is a great joy for her.

She said yesterday, after a minus two degrees start, became a marvelous winter’s day of 22 degrees: “You can walk down here any time of the week and there’s very few people, but look, you can’t move when the Market is on.”

In what way has the Market changed?

“It’s grown. I don’t think it’s changed that much.

“The types of stalls haven’t changed but there are more people and more stalls. As the town has grown, so has the Market. At the beginning it only went up as far as the church but now it goes all the way.”

As a once-a-month affair the Market started outside the Polana Centre in Smith Street but soon moved to Todd Street – which was closed for vehicles on Market day.

It became a fortnightly event and soon additional Markets were added after major events such as the Show and the Camel Cup.

“The stalls, the atmosphere. It’s a happy day. An outing. It’s very social for me,” says the retired nurse. “Ex-patients, ex-staff I worked with. You get all your social engagements over in one day.”

Food stalls were always mostly offered by Asian people, with Indians now present in greater numbers: “It’s unusual to find a stall that sells steak sandwiches. Except Beat Keller has been selling European sausages for many years.”

Should the Market in summer be in the evening?

Isn’t it very hot in summer?

“It’s very cold in the winter, so what’s the difference? (Laughs.) We adjust. There’s a power point out the back of my stall. I’ve thought of bringing a heater once.”

Is the Market perfect or should something be changed?

“No. I’m really happy with what it is. Any changes we just adjust. It doesn’t change all that much.”

“Is Teddy recovering?” It’s one of the seven passers-by who said hello to Maureen in our 17 minute conversation.

How many people stop to say hello over a whole Market day?

“Heaps and heaps. I should be a politician. That’s how many people know me.”

Well, there’s Warren Snowdon’s stall opposite you, ever thought of standing against him?

“I decided no, I like what I do. The politicians all come by and say hello, including the Chief Minister, but he’s not here today.”

There’s never a dull moment: “I remember somebody across at the stall over there, a man grabbed her bag and I grabbed him from behind, held his arms, and another stall holder took the bag off him and gave it back to the woman, and then a fellow waiting in line to get food was an off-duty policeman and he grabbed him.”

“Excuse me, I think he needs to go to the toilet,” says a woman, pointing at a Teddy in a hospital bed, wearing an oxygen mask.

Another day Maureen says she chased two teenagers who stole a collection tin. “I was 70 and they were 14.” They got away.

“This Aboriginal lady said to me: Did they steal your money? I said: No, the charity’s. She said: Well here, I want you to have this. It’s all I’ve got. It was $6.50 because she’d bought a sandwich and this was her change. It meant so much to me, her doing that.

“And the police came and they helped me taking down my stall. So that – kind of – was another good Market Day.”