Impu to spend at least 14 years in prison

Bruce Impu (pictured), who pleaded guilty to eight counts of rape at gunpoint of two European tourists in Alice Springs in 2012, was today sentenced to 15 years with 12 year non-parole period.

It will start at the end of a sentence he is currently serving, which has two years to run.

This means Impu will be behind bars for at least 14 years from now, for a crime which Justice Jenny Blockland described as a “particularly brutal offence of a demeaning kind” as well as “callous and painful lengthy assaults”.

Impu’s two co-defendants were previously sentenced to 15 years with a nine year non-parole period. Justice Blockland said the longer non-parole period was in recognition of Impu being the principal offender, the gravity of his offending, and his long criminal record.

The judge said he will need to be monitored after release “for some considerable time”.

The public gallery was packed with relatives and friends of Impu, police officers and media.

Before the judge entered the court Impu’s mother, holding a baby, approached Impu who was siting in the dock.

She spoke to him in language. Impu smiled at the baby. Justice Blockland, in her reasons for judgment, mentioned that Impu was a father but the child was born while he was in prison.

A Corrective Services officer told Impu’s mother to stop talking to him.

She then sat in the gallery in the seat nearest to her son. However, as Justice Blockland read out in graphic detail the sustained sexual acts performed by “three cowardly and aggressive men attacking and humiliating two women,” Impu’s mother walked out of the courtroom.

As the judge described the multitude of sexual assaults on the two women, who had been sleeping in their car in a well-lit residential street near the casino, Impu sat motionless in his chair, not displaying any emotions.

Justice Blockland said Impu told the women they could not again stay in place of the crime because it was a sacred place.
He also told the women not to go to the police: His family was in Alice Springs and “we know your face”.

The crime was in the high range of seriousness, was performed in company, had two victims who were particularly vulnerable, the three men were brutal in their demands and threatened the victims with a firearm, said Justice Blockland.

The two women feared they would be killed or seriously injured.

She said the events had a devastating effect, took a terrible emotional toll. 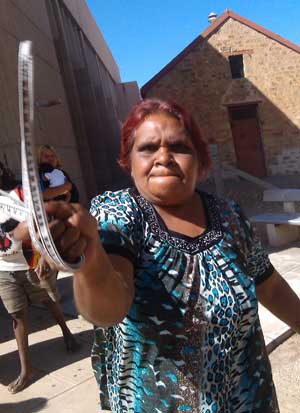 The victims are finding it difficult to form personal relationships, have great difficulties at work and study, each one feeling guilty what happened to the other.

They are suffering great tiredness and depression.

Justice Blockland said Impu was raised mostly by his grandfather. He died when Impu was 13. He went back to his mother who drank heavily and provided no real parenting. He was deprived of childhood nurture that every child deserves, said Justice Blockland. Alcohol, drugs and offending had an ongoing effect on Impu’s life.

She said his guilty plea was taken into account when the sentence was reduced (she said the maximum penalty is life).

The remorse expressed by him to his defence counsel “is likely to have been belatedly expressed”.

PHOTO: Impu’s mother attacking a photographer outside the court this morning.

In the year ending September 2020 the tourism industry took a 52% hit, according to Tourism Central Australia CEO Danial Rochefort. Asked whether there had...
Read more
Issue 3