Dining like kings with a bushman of high degree 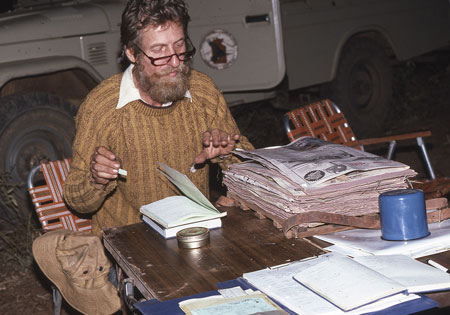 Early in 1970, carrying a biology degree, I returned to a full-time job in Alice Springs as a Plant Ecologist with the Northern Territory Government. (The crocodile job had not eventuated.) In October of that year, another botanist, Clyde Dunlop, and I carried out a botanical collecting trip into the Peterman Ranges area.

Docker River (now called Kaltukatjara), had only just been set up as an Aboriginal settlement, and we proceeded from there to the south. At that time, what is now the township of Pipalyatjara, was nothing more than an open plain, with a hand pump in the middle of it, which could supply water to passers-by. We stopped there to fill up our water tank, and came across an elderly Aboriginal couple, who were out there living off the land, probably several of the last true desert nomads in that area. We gave them whatever of our supplies we could spare, and continued on our way.

It was to be another year before I came into contact with black bushmen in my work, and this time it was back in the Top End. In late 1971, I was given the job as botanist for a biological survey of the Wessel Islands, which lie about 600 kilometres east of Darwin.

By this time Dave Linder had been transferred to the north and finding bigger and better reptiles up there, he had forgotten all about his former love of the desert. He was the fourth white member of our expedition, and he had somehow wangled the system to get Tiger, a traditional owner of Coburg Peninsula, to accompany us. Although the Wessels were far from Tiger’s country Dave had worked with him in the past, and knew that he would be a very handy man to have along. And he proved to be just that, a bushman of high degree.

At that time Tiger was already an old man, but he had the body of a Greek god and only his eyes showed his age. He was tough as nails, and a story Dave related to me, emphasised this point. Like most of the old bushmen, alcohol was Tiger’s weak point, and when in town he was a binge drinker.

This particular night Tiger had drunk away all his ready cash and so he turned up on Dave’s doorstep, under the weather, demanding a loan to get some more grog. Now Dave’s house was one of those on stilts, so there was a landing by his front door, with rails around it to prevent one from dropping to the ground three metres below. While Dave was trying to convince Tiger that he had had enough to drink and should have something to eat, somehow or another Tiger managed to spectacularly somersault over the protective rail and land headfirst onto the concrete floor below.

Greatly alarmed, Dave examined Tiger and could find no sign of life.

“Hell,” he thought, “he’s killed himself, but there’s not much I can do tonight, I’ll report the accident in the morning.”

And sorrowfully he repaired to bed.

Early next morning Dave was woken by banging on the door. Bleary-eyed he opened the door, and there was Tiger, fit as a fiddle, totally unaware of the drama of the night before, demanding a beer to start the day!

To get to the Wessels we managed to hitch a lift on the barge that carried supplies to settlements further to the east. As soon as we had finished transferring our gear from the barge to shore, on our two dinghies, Tiger patrolled the beach with his spear. Within ten minutes had had procured our lunch, spearing two nice big fish.

With seemingly little effort he further supplied us with fresh food over the next three weeks of our stay. Oysters, twice the size I was used to, mud crabs, crayfish, shellfish, stingrays, turtle meat and eggs, and every kind of fish, all ended up on our table.

I never thought I would get sick of fresh seafood, but towards the end of our stay we started to crave red meat – so Tiger went out and got us some fruit bats, equally delicious as roast beef when cooked in the camp-oven.

We didn’t have a fridge, so we had to catch our fresh food every day, as it wouldn’t keep in the hot steamy conditions. Tiger and I were coming back to camp late one day in the dinghy, when he diverted from our route and headed for a part of the sea where diving seabirds were congregating. When we got in amongst them I realised we were above a huge school of fish, so Tiger and I both threw out our fishing lines to catch the main course for our evening meal.

Whatever Tiger caught on the end of his line must have been big because it bit straight through the wire-trace holding the hook. I too caught a nice big fish and proceeded to pull it into the boat. There was however, such a frenzy of fish in the area that one of them jumped out of the water and cut my line with his fin. We had no spare lines, so Tiger and I ended up sitting above this ‘fish soup’, sadly regretting the fact that dinner that night would have to come from a tin.

Fishing success in this area is apparently still quite good, but nowhere near as good as in 1972. In fact, for the whole three weeks of our stay we only saw one other sign of human activity, namely a prawn fishing-boat, whose occupants generously supplied us with some fresh bread from their freezer, and as many prawns and Morton Bay bugs as we could eat.

I found the islands to be of great interest, and discovered many unusual plants, some of which were new to science. One thing for sure, I would not have been able to do the job I did, without Tiger’s help. His main job was the drive our dinghies, and he was as good a boatman as I have ever met. Using his boating skills, he got me to parts of the islands that I could never have got to by myself.

Not to say that our stay was all ‘beer and skittles’. On our first night we camped on the beach, between the ocean and a large inland freshwater billabong. My neighbour had his swag about two metres away from mine, and when we woke up next morning we found the fresh tracks of a large saltwater crocodile between our swags!

It didn’t help that the weather at that time of year was extremely hot and sticky, and the sandflies and mosquitoes tormented us endlessly. And also that the island’s area consisted of sandstone outcrops that were highly dissected and dangerous to scramble over. And we were a long way from anywhere if anything went wrong.

Tiger had only consented to come with us on the condition that he was supplied with a bottle of wine with his dinner every night. Dave had hidden the bottles throughout the camp, to ensure that they lasted for the length of our stay. On our second-to-last night however, Dave could not find a wine bottle, so Tiger had to reluctantly go without.

On our last day, as we were packing up, Dave found the remaining last two bottles, plus several casks of orange juice. So that night, to celebrate our successful survey, we shared the remaining wine with Tiger. Our bottle didn’t last long, so most of us soon retired to bed. But not so Tiger and one of our other expeditioners, whom I will call Fred.

Fred got hold of our preserving alcohol, which is pretty potent stuff, but found it was quite drinkable when mixed with the remaining orange juice. So Fred and Tiger partied on to the early hours of next morning. On the boat trip home Fred confided to me that during that night he had reached a deep understanding of Aboriginal culture. I wasn’t sure I could believe him, because during the night  I woke up several times and listened to their deep and meaningful discourse, and it went something like this:-

“I luv ya Tiger, you’rre a number-one bloke – I luv you soo much I’ll give you my watch.”

“Tankyou  Fred, I luv ya too, him be a number-one watch.”

And so on and so forth!

These two renegades had only just retired to their swags when the barge turned up to take us back to Darwin. The rest of us had already loaded the first of our gear onto the dinghy, when Tiger appeared on the scene. He was still so far under the influence of alcohol that he could hardly walk, but his job was to drive the boat, and drive it he did.

We watched with our hearts in our mouths as Tiger and the boat, carrying our hard-won fragile specimens, weaved their way to the barge. Somehow or another he made it to the barge, and after unloading headed back to us, gathered on the beach.

He was heading straight towards us at full speed! But of course, at the last split second he broadsided the boat so it plonked onto the beach in front of us, ready to be reloaded. He could hardly walk but he could still skilfully drive the boat!


Author photo by KEN JOHNSON. Taken in June 1987 during a biology survey in Gulf country, it shows Latz in camp, cataloguing the plant specimens he had collected.

Part 1:  Tomcat and Turpentine Bush: adventures in the Tanami